"No man on earth could get him out of prison alive. Seven women did."

If you watch as many Direct-to-Video Low-Budget action movies as I do, then you know that a majority of them are just alright. Some end up being forgettable, some end up being just plain terrible, and then some will just blindside you out of nowhere and end up being amazing. This is one of those films.

Brian Thompson (Cobra) plays Frank Ryan, a mercenary who's hired to sneak into South America and rescue an imprisoned rebel leader. To do this, he must go undercover as a gay fashion photographer, and will have to hire and train 7 women to be both models and assassins to be able to pull this job off.

You'll know in the first 5 minutes whether this film is your cup of tea or not, because right off the bat, it's blatantly absurd in a very cheesy late 80's/early 90's kind of way - the kind of action film I just so happen to be obsessed with. None of it is on purpose either, it's all done straight in a legitimate way, which makes it all the more amazing and hilarious. If you're into this kind of thing, then Hired to Kill delivers on every level. It's a film that, while a bit goofy, fires on all cylinders to deliver exactly the kind of action film experience that I just love to death; cheese, action, explosions, nudity, one-liners, awesome and unintentionally hilarious.

Brian Thompson just rules so hard in this. It's like this role was tailor made just for him. We all know him as The Nightstalker from Cobra, and a slew of other minor roles in films like Three Amigos!, Alien Nation and Fright Night Part 2, but he was highly prolific during this time, taking bit parts in television shows as well as big budget and low budget features, and even starring/headlining in a few here and there. Of all the films I've seen him in, and it's a lot, I'd never actually seen one where he was the star, and where he wasn't the villain, so just with that alone, I was pretty excited going in.

What can I say? Thompson is a badass in this. He really is. From his very first second of screen time, which is literally the very first image of the film, he exudes a cool, tough guy, machismo that is a bit ridiculous, yet so unintentionally silly and hilarious. How cool is he? Well, when his alarm clock goes off, instead of just pressing a button to turn it off, he instead pulls out a gun from under his pillow and shoots it, without ever opening his eyes. That kind of cool. His "I don't give a shit" attitude is what really sells it though. First and foremost, it's the cheesy dialogue, but it's also in his delivery. He seems to just really hate women in general, and because of this, his character is fascinatingly entertaining in an overly macho way, like he's overcompensating for something. It's highly amusing, and Brian Thompson sells it like nobody else does. It's really a shame he never got the chance to do more films like this as an action star. If this film proves anything, it's that Thompson should have been given more opportunities like this other than typically playing a villain.

I'd never heard of Greek writer/director Nico Mastorakis before this. It seems though that he was a pretty busy guy, throwing out a good 2-3 films per year during the 80's and 90's. I think what surprised me a bit was that he didn't just stick to action. Comedy seemed to be a genre he constantly came back to, as well as horror and thrillers. Yet, if this film is any indication, action seemed to be his calling. As I look into them all though, it seems the "quality" of his work varied greatly from film to film, as is usually the case with these type of filmmakers. Jim Wynorski, Richard Pepin and Joseph Merhi are other examples of genre directors I love for certain films, but tend to offer work that is sub-par, or falls flat for the most part. It would seem Mastorakis easily falls under the same category; a director who has a few solid standouts, but otherwise who's large output of films are pretty forgettable. It's a bit disappointing too, because just based on his work in this film, he does a pretty great job in terms of his camera setups, action sequences and editing. Or, a decent enough job that benefits the material. 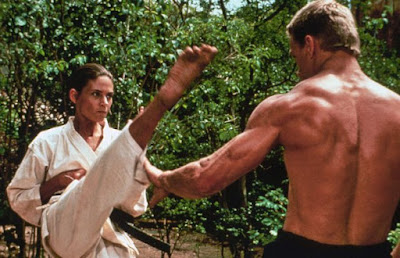 There's so much to love about this film. Not only does it deliver on the action, but just the premise alone, about training 7 women to become assassins, and heading into South America under the false pretense that they're famous fashion models, is just ridiculously awesome. There are moments that the film is just so absurd, that they apparently didn't stop and think how plausible any of it would be. For example, there's a scene where Ryan (Brian Thompson) is training the women in a camp ground, and using cardboard cutouts as targets that pop up. Some of them are of him, and some of them are of the notorious leader they'll be going up against to get to the other leader they're attempting to rescue. The bad guy is none other than Oliver Reed. Yes, that's right. And so when these cardboard cutouts of him appear it's quite hilarious. You think "how did they get this perfect image of him? And when and how the hell did they get these made?". It's just so random and unapologetically silly, but that's what makes this film so great.

Hired to Kill has everything you could want in a film like this; nudity, tons of action, explosions, one-liners that rival the best of Schwarzenegger, an absurd but highly enjoyable premise, and a scene where Brian Thompson kisses Oliver Reed. It's a nonstop ride of nonsense, cheesy fun, action-packed and entertaining as hell. It's exactly the type of film you hope it will be.

How To See It:
Long available strictly on VHS, which you can get for around $10 or under, depending on the seller, Arrow Films recently released this on a DVD/Blu Ray combo last year that includes a gorgeous new widescreen transfer (it's never looked so good), new interviews with writer/director Nico Mastorakis and Brian Thompson, and a few other goodies. But to be honest, I had a blast watching this on VHS,  it just adds that extra bit of nostalgic spice to the experience. And as much as I love the film, I don't really feel it's the type that needs a new spiffy cleaned up transfer. But, that's just me. I know others love to upgrade their collection from format to format and believe me, I get it. I do the same thing with certain films. I just don't feel like this is one of them. But kudos to Arrow Films for doing it, because ultimately, it will allow this hidden gem find a larger audience.

Posted by robotGEEK at 3:55 PM