The Mangler Film Review; Tobe Hooper's Nail in the Coffin 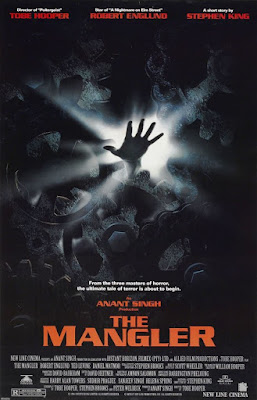 I'd always been mildly curious about this one. On the surface, it has a lot going for it. For starters, it's directed by Tobe Hooper, a director I continue to admire simply for his 80's output, yet knowing also that he really hasn't made a good film since that decade. It's also from a story by Stephen King, which was first published in 1978. And finally, it stars Robert Englund. I mean, that's a pretty large trifecta if you ask me. Though I have never heard anyone actually say that they liked this film, I figured with all this talent involved there's got to be something decent about it, right? In the very least, if it ended up being a mess, I was hopeful for a hot mess. About a good 30 minutes in, I knew I was in trouble.

There is so much wrong with The Mangler that I don't even know where to begin. Mind you, I went in very hopeful and optimistic. You see, I tend to end up loving films that others hate, so I was hoping that there would be some kind of redeeming quality for me to ultimately enjoy it, because more often than not, I usually tend to find some aspect that made me love a film that would otherwise prove a waste of time. It's so sad and frustrating to walk away from The Mangler and being completely blown away by how awful it is. While the idea about a horror movie involving a possessed refrigerator and a possessed laundry machine may sound silly, it could still be fun. Don't forget, Christine is a bout a possessed car, and it's amazing. Soooo....you never know. Let's dig in.

The Good:
Tobe Hooper's direction didn't disappoint. Really, this is one of the few things about the film that I actually liked. Hooper has a very specific way of shooting, and it's one of the reasons why I love Invaders From Mars and Lifeforce so much. I was happy to see that with The Mangler, his style hadn't changed a bit. What I did notice though was that he tended to do a lot more camera movements than what I'm used to from him. I'm serious, I can't recall a moment in the film when the camera was not sweeping up and down or side to side - sometimes both in the same motion. The camera is constantly moving, but in a very classy and deliberate way. And you know, I found it refreshing. No handheld camerawork either. Each scene and sequence is a sophisticated blend of old-school technical tricks, lighting and inventive camerawork that gives the film a very Tobe Hooper-esque vibe.

Better than you expect effects work. While the film overall didn't really contain a lot of gore the way I had hoped, the gore that is in here is pretty well done and effective. Maybe had the film been a lot more gory, it would have been passable.

The design of the possessed laundry press machine, The Mangler, is rather impressive. Huge, with a very retro industrial look and very menacing. In fact, the machine is sort of it's own character in the film in more ways than one, especially in the way Hooper shoots it. he really does his best to make it look like an actual monster and marginally succeeds. 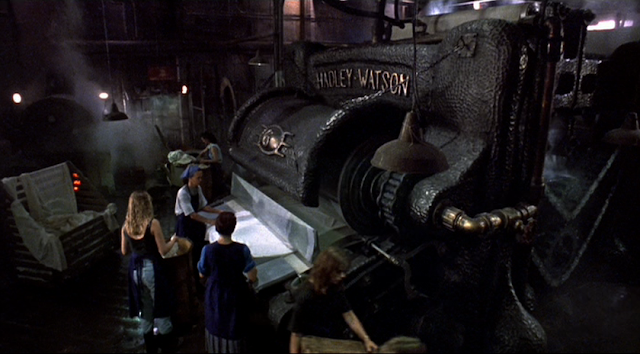 That's really where all the praise ends because this film has so many problems and a plethora of questionable decisions that it's hard for my brain to comprehend the fact that a film can look so good, yet be so bad, and not in an enjoyable way either.

The Bad:
The acting is just terrible. Let's begin with the obvious choice, Robert Englund. I love the guy. Who doesn't? In fact, I'm having a blast watching him on the original 80's sci-fi show V: Enemy Visitor as I revisit the entire series. You'd think for a project like this, he'd be a natural fit, but sadly he is not. In the film he plays an older gentlemen by the name of William Gartley. For starters, I'm not really sure why they had to put him in old age makeup. It's very unconvincing and pretty bad when you stare at it for more than a few seconds. If it had to be an older person, why not just hire an older actor? Oh I get it, stunt casting. Englund really hams it up in this too. Sure he does that with the Freddy films, but it was so over the top in this. While that wouldn't necessarily be a bad thing, it's the way he does it that makes it come off as annoying. He seems to go in and out of some sort of accent (I can't even begin to tell you what kind or where he's supposed to come from) throughout, and then his tone shifts so regularly that you'd swear 3 different people were providing the voice work. Sometimes he whispers in that very Robert Englund whisper. Sometimes he's growling with a gravely raspy voice, and sometimes he's speaking like a normal human being, albeit with a weird unspecified accent that comes and goes. It was odd, and very hard to understand why that approach was taken. 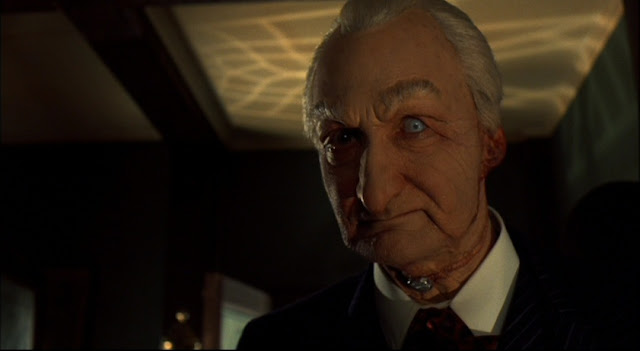 Ted Levine did not fair any better. I actually wasn't aware he was in this, here playing the lead cop, until he stepped outside his house in the beginning of the film. It was a pleasant surprise, only to be made sour almost immediately. I don't know, I've seen Levine in plenty of shows and films, and I have never heard him sound so odd before. I know his unique voice is his "thing", but it's the way he speaks and forms words in this that kind of makes no sense. It's hard to understand what he even says half time time, and then the way he says them makes it even worse.

And then there's Daniel Matmor, who plays the brother-in-law to Levine's cop, and ultimately the film's occult expert who ends up figuring out what's really going on with the laundry press machine. He's another good example of what's wrong with this film. He speaks with an accent that comes and goes, but you can't place it. It's obvious he's not  American, but tries to do an American accent, which is not believable. He's also a bit annoying. You can't figure out why he's so involved in the first place, and why he thrusts himself head-on into danger at any moment.

For some reason they decided to cast Jeremy Crutchley in two different roles in this, the mortician and the photographer. Right from the very beginning you'll notice that the photographer is just a young guy under old age makeup. It's such a bizarre decision and one that has no payoff at the end. I kept thinking that the "unmistakable younger guy under heavy old age makeup" thing would end up being some kind of a gag or maybe play into something later, but it doesn't. I have no clue why they used the same actor for another role, or why they just couldn't hire an older actor to play the photographer in the first place. It makes no sense! 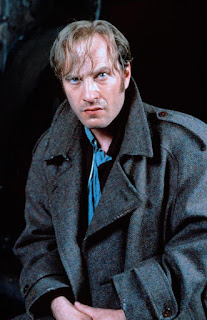 Who was the costume designer? One of the most notable aspects to this film, even though it shouldn't be, is that nothing fits right on anyone. It seems wearing large over-sized trench coats was a thing because everyone has them. But it's Ted Levine who takes the cake, who is literally swimming in a jacket that's at least 4 sizes too big. It's a dumb thing to comment on, I know, but it's so distracting also. He hobbles around like he's drunk most of the time (for all I know maybe he was?), and wearing a huge oversized trench coat only makes his appearance look weirder in general.

The music is forgettable. Generally music is used to enhance any scene or sequence, however in this case, it's the complete opposite. I found the music to be poorly matching with the actual film, becoming a bit distracting at how bland, unsavory and uninspiring it ultimately was. You shouldn't even notice the music. It should just be a part of the scene naturally. But in this case, it says a lot when you notice just how awful the music is in a horror film, when really that's the last thing you should notice.

Final Thoughts:
Unfortunately The Mangler is a mess from the get-go. I wish I could say that Hooper's direction saves it to a degree, but it doesn't. While admirable, there's just too much else wrong with this film in general that are way too distracting to allow you to admire Hooper's always reliable visual pizzazz. I can finally understand now why nobody ever mentions this film. It's terrible.
Posted by robotGEEK at 2:42 PM