Godzilla: Final Wars; The Most Bonkers Godzilla Film Ever Made 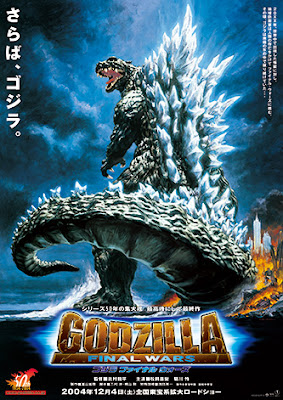 I'll be honest. I've never been a big Godzilla fan. No real reason either other than I just never put much thought into them, which is weird because you'd think I would love this franchise. In any case, I've probably only seen the same amount that the most casual moviegoer has seen, so that would be the Hollywood remakes/reboots essentially. But some years back, I just happened to pick this up from a Japanese seller on eBay for the sole reason being that it was directed by Ryuhei Kitamura, who had blown me away with his bizarre kickass zombie/samurai/horror/action film Versus. That's all I needed to know. And this was before we ever got an official release here in the states, yet it just sat in my collection for years until I dug it out of my stash as we've been on a bit of a Godzilla kick lately, and I remembered that I had this somewhere.

Holy shit. This has got to be one of the most batshit crazy films I have ever seen. That's not something I was at all prepared for when sitting down to watch a Godzilla film of all things. I know the series had gotten pretty campy going into the 70s, then after a long break, took a more serious turn with Godzilla 1985, only to go back to the camp-factor again with the films that followed. What I didn't know was that this was to be the final Godzilla film. It wasn't just a clever title, it was literally stating it was going to be the last one. So with that in mind, I can only assume that they wanted to go out with a bang. And boy did they ever!

Truthfully, I can't even begin to try and give you a synopsis on this, because it was so crazy and so much was going on with different storylines happening simultaneously. What pops out in my mind is that Godzilla literally fights almost every single monster he's ever battled before and it's glorious.

Being a film written and directed by Kitamura, while primarily a monster movie, you can also expect a ton of other random shit thrown into the mix. In this case, it would be a wholelotta Kung Fu. And not just any Kung Fu, I'm talking Matrix style Kung Fu, because if you're going to ripoff anything, why not ripoff from the best? So while there's a lot of big monster fighting action going on, there's also a large amount of hand to hand Kung Fu fighting from the humans. But really, it's only the tip of the iceberg with the amount of crazy going on. It all comes at you at breakneck speed, so you rarely have any time to recover from the previous badass WTF? sequence before another one tops it with something far more outlandish. 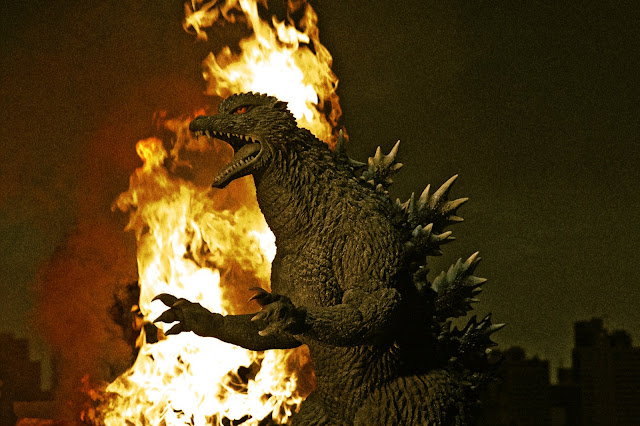 What I really liked, and am really thankful for, is that Kitamura and company didn't go into CGI territory with the monsters. Now there is a small brief moment where they do use it for a monster, but once you see what monster it is, then you'll understand why it's so perfect. Otherwise, they stick strictly to the "man in suit" stuff and it's just amazing. The model work is also highly impressive. In fact, I'll just say that even though some CGI is used randomly here and there for certain things like enhancing a background, an underwater sequence, motorcycle chases, or for some of the human gunfights, when it comes to the actual monster battles, of which there are aplenty, it's rarely ever used. The man-in-suit and model-work stuff is exceptional and done so impressively well that when you look at how Hollywood "still" insists on doing complete CGI for him anytime they try to reboot or revamp the franchise, it just makes you frustrated. Why? Because while they look good and "epic", they just don't carry the same weight that these older more simple ones do. Yea they look cheesy, but they're certainly more entertaining. I have yet to see a big budget Godzilla film that wasn't boring, flat and dull, even with a "realistic" looking Godzilla.

All in all, my brain could barely handle and process the amount of "insane" and "awesome" that Final Wars was able to deliver. For a film that was to be the end cap of a long and lustrous franchise, they sure went out with all guns blazing. I never knew where the film was going and there was never a dull moment. Things move along so rapidly you barely have time to breathe. In fact, when I look back on it, I still can't believe they were able to fit so much carnage, so much awesome, and so many different storylines into a single film. There's even a sequence that resembles an Albert Pyun post apocalyptic film! Most of the time, Toho and Hollywood have had a hard enough time trying to make even a single opponent seem interesting, let alone an army of nearly every single monster from past films. I'm shocked they were able to pull it off!

There have been some crazy and campy Godzilla films for sure, but I doubt any can match the lunacy of this film. It's completely bonkers in the best possible way.
Posted by robotGEEK at 2:29 PM