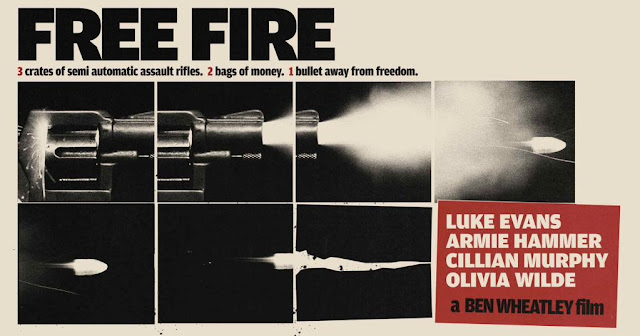 I find Ben Wheatley to be a hit or miss filmmaker for me. He never really sticks to a particular style or even genre, but generally delivers an interesting film, except for High Rise, which was just a huge mess all around. I'm not even sure if it was entirely his fault, or if the book was just too difficult to translate to the screen. Either way, it was bad, which is a shame because it had potential.

But while Kill List was just alright, I enjoyed A Field In England so much that I'm always willing to give the guy another chance. I know he has it in him and well, it looks like maybe his next film, Free Fire may very well be that film I've been waiting for. Sure it's not all that original an idea, and I'm sure a lot of people will start comparing it to other similar films, but hey, when you come off an experience like High Rise, maybe he just wanted to do something more easy and fun, and Free Fire certainly looks to be that.

Some of you may have already seen this trailer by now, as it's been out for months and I'm only now becoming aware of it, but when it played before my recent rental of The Monster, I was kind of floored by it's frenetic pace and energy, and when I saw it was a Ben Wheatley film, I was pretty much sold. I'm not expecting anything but a good time, so I hope it can deliver.