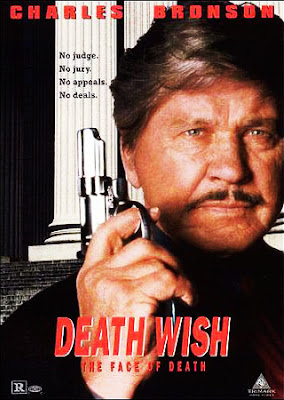 I'll admit, despite my love for the series as I explored them all for the very first time within this past year, I was a little weary going into this one for a number of reasons. First of all, that cover is just awful. It looks like a Made-for-TV movie. It's also not an entry in the decades long franchise that anyone ever mentions. At least, not in my experience. But I needed to finish the franchise, even if I wasn't particularly all that excited about this one.

Truthfully, it took a good 30 minutes for me to really get into it. Much like the cover art, it has a very Made-for-TV quality about it. Yet it's not a bad looking film. Writer/director Allan A. Goldstein does give the film an overall nice look, despite the film looking limited to an extent. But still, he's an odd choice for something like this, especially when you look at all the previous entries. Nothing in Goldstein's past filmography would lead you to believe he could deliver a solid Death Wish film. Nothing. My guess is Menaham Golan got him cheap. So I was kind of thrown off with that for a bit, but I'm glad I stuck it through because the film only got better and better as it moved along. In fact, simply based on how the film looked and started right off the bat, I was not at all expecting it to go where it ultimately did in terms of the action and violence. 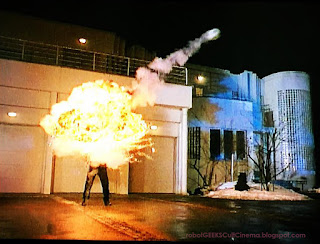 Poor Paul Kersey (Charles Bronson). The guy just cannot catch a break. It doesn't matter where he moves, or how many years have passed since the last catastrophe, he just seems to attract trouble and torment. It's like it's never far behind, always just waiting in the wings for the absolute worst moment to strike, and it always does. Essentially, that's what the Death Wish films feed off of, and it's what makes them the films they are. But seriously, how much can one man take before he loses his mind? Thankfully that hasn't happened yet, and whenever tragedy strikes, Kersey shifts into revenge mode to deliver some vigilante justice, but you'd think that by now he would just stop dating altogether. I mean, every single woman in his life, whether it be a family member or  love interest, dies simply because they are a woman in a Death Wish film. That's just the formula Michael Winner began with in the first film, and carried on into the second, and it's a formula the series has continued even going into this one. Now that I think about it, I can't recall a woman close to him dying in Part 3, but I could be wrong. And the kills. Oh the kills! When they finally do come into play, they're pretty spectacular. I'll just leave it at that.

The cast is pretty solid, but aside from Bronson returning, the only real standout is the casting of Michael Parks as the main villain, who does a formidable job in the role as a slimy, cantankerous businessman who runs his businesses like the mob. Speaking of casting, Bronson was 72 when he made this, which just blows my mind. The guy doesn't look a day over 60 and age has not slowed him down one bit. 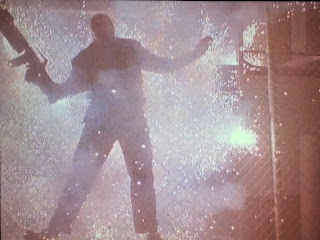 So the film itself turned out to be a lot better than I anticipated. It takes a bit to get used to it's particular TV atmosphere, but that doesn't really last long because soon enough, it begins to slowly resemble the kind of film you were looking forward to right from the start. There's really nothing about the story that set's it apart from any of the other previous entries; the woman he loves is killed, so he goes out for revenge. Same ol' story. Though it has a lower body count than most of the other films, it's the way and manner that these sorry sons of bitches are killed that kind of blew me away. There may be less killing, but it's pretty brutal all the same. I also have to give credit to Allan A. Goldstein, the director. When the action kicked in, the film took on a whole new life and it was awesome. Whether it be a chase, shootout, fist fight or execution, the film kind of shifts gears and I kind of wish there was more violence because the film was so much better when there was. I really dig it. It's almost as if the film was directed by 2 different people, and for all I know, maybe the 2nd unit or assistant director's had something to do with that. In either case, you can bet your ass that when it comes to the "revenge" aspect to the film, Death Wish V: The Face of Death does in fact deliver the goods in a big way. 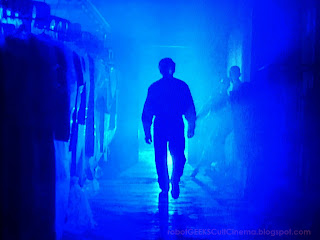 Despite all my praises, because it is indeed a highly enjoyable film and better than I was expecting, it doesn't come off as one of the best in the series. In fact, taking into consideration that they're all pretty great each in their own very specific way, this would easily be the weakest in the series. But rest assured, that doesn't make it a bad film in any way. It's a solid entry in the Death Wish franchise, and taking into account that there was a whole 7 year gap between Parts IV and V, that this is the only 90's film in the franchise, and also that Menaham Golan's 21st Century Film Corp (a poor man's Cannon Films) produced this, the film will surprise you. Yea I know, Cannon wasn't exactly "quality", but they sure did release a lot of classics that despite their cheesy/amateur/low-budget existence, held a deep rooted place in a lot of our hearts. Of course a lot of that is contributed to the fact that they were made in the 80's, which was a wholly different era of style and filmmaking. If there's anything Death Wish V proves, it's that  it has a lot of things stacked against it right from the get-go, yet ultimately prevails despite it's numerous obstacles. It caught me off guard in a good way, and while it might not be the best entry in the franchise, it's vastly superior to a lot of the paint-by-numbers copycats that were prominent in this genre on both the big and little screen,. It's a great film, you just have to give it a chance.

I think one of the biggest surprises for me was that this film was not easy to obtain in a physical format. The VHS and Laserdisc are shockingly pricey. Too pricey in fact for a blind-buy. The bare bones full frame DVD was significantly cheaper, running on average about $8-$10. Still, a bit pricey for me for a full frame presentation. In the U.S. we haven't gotten a Blu ray, and even though Parts 2-4 have, I realize now that it's because those were originally under Cannon, and this one is 21st Century, meaning 2 different companies and I guess MGM was not able to secure the rights for Part V to include in their newly released DVD and Blu ray's. I ultimately rented it from Netflix since I still get their DVD's. But now having finally seen it, I will most definitely buy it on some physical format to hold me over in the hopes that it does get a Blu ray someday. It's a keeper.
Posted by robotGEEK at 10:20 AM