When the first John Wick came out back in 2014, I was a bit blindsided by how effective it was as a pretty standard, yet highly entertaining action flick. You see,  I just love action films. I'm talking any kind of action film- I don't discriminate. 80's action, 90's action, sci-fi action, low-budget action, big budget.....you name it. I live for this stuff and I can never get enough of it. So when a modern day action film comes out and it's "not" filled with obnoxious handheld/shaky-cam/quick-edit garbage (the standard for modern day action films), well that's something that you tend to notice. At least I do anyway. What's even more impressive is that the film looked incredible. Aside from the fact that they bypassed this whole visual gimmick altogether, they really took their time giving the film an overall slick sheen that you just never see in action films these days. I wouldn't necessarily call it a throwback to action films of the 80's and 90's (and I don't think they were even trying), but when a good 95 percent of modern action films are generally nausea-inducing, John Wick was a breath of fresh air.

John Wick kind of crept up on us and became a sleeper hit, thus thrusting Keanu Reeves back into the big leagues, and more importantly, a possible new franchise. The popularity of this film, and primarily the character of John Wick, begged for a sequel, and if there's anything Hollywood can guarantee, it's that they're predictable, so of course a sequel was inevitable. In fact, I'm sure the machine was already rolling before we even gave it a thought. So here we are, 3 years later, same star, same writer, but this time only one-half of the original directing duo.

After Thursday night's advanced screening of the film, reviews began pouring in all over the internet, unanimously praising it as a bigger, bloodier, more violent, and all-around better film than the first. So it was a bit hard to not go in with some rather high expectations. Plus, it was an action film, so my enthusiasm was nearly tangible going into my sold-out Saturday night screening. The theater was packed, the crowd was pumped, and the avidity was palpable. Let's dig in.

John Wick is brought out of retirement and forced to pay a debt, only to be double-crossed with a large bounty put on his head.

John Wick: Chapter 2 was good, a solid effort and I enjoyed it for what it was, but I didn't love it. I didn't feel that it lived up to the early hype and while entertaining enough, it didn't blow me away the way I had hoped. As a film, it's a very good and solid modern day action film. The stunt-work (the heart of this franchise) was on point, and Keanu once again proves that despite being over 50, can go toe to toe with the younger guys in the industry on a physical level. Chad Stahelski's direction packs a punch both visually and technically, which really isn't something you can say about directors in the current state the genre sits. Right off the top of my head only 2 come to mind, Antoine Fuqua, who consistently impresses me with every new film, and Adam Wingard's work on The Guest back in 2014. In fact, now that we're on the subject, I feel compelled to mention that 2014 is an important year for this genre. Not only did John Wick come out of nowhere to take the reigns as the biggest surprise in that year, but it was also the year that 2 other similar films came and went without nearly the same fanfare as Wick, yet I personally found to be better films overall. That would be The Guest, and Fuqua's The Equilizer, with Equilizer being the better film of the 3 in my humble opinion. I think John Wick blindsided the industry and the general public with it's visceral neon colored punch, which also worked double-duty as a welcome return to form for Keanu, who hadn't had a bonafide hit since the last Matrix film in 2003.

Leaving the theater a bit underwhelmed also left me dismayed. I don't know, as much as I wanted to love it, I kind of felt like it was following the same recipe as the first film in terms of beats. It's not the same story, thankfully, but it tended to follow the same pattern and quite honestly, felt like it was going through the motions from time to time. Yet it's not a bad film, not in the least. It's another solid effort from the same team, and only reaffirms director Chad Stahelski's status as one of the more gifted action directors to emerge in a very long time. Is it better than the first film? No. Is it a good action film? Yes. I just kind of struggled with the fact that while the action was brutal and plentiful, it was slightly numbing and tedious after a while. And then I go back to the verity that here we have a hard R-Rated film in a time when that is practically unheard of because it almost guarantees less money for the studio, so they tend to water down these action films to make them PG-13, the way they do with the frustratingly dull Expendable franchise. I like that about these John Wick films. I like that the team making it do not cater to the studio chiefs by delivering a safe action film, one that would more than likely guarantee a return at the box office. Hell, they even included smoking, which as odd as it sounds, is something you also rarely see in any film or show anymore. And that's why these John Wick films are significant, because whether you enjoy them or not, they don't abide by the studio guidebook, instead choosing to bend the rules a little bit to create something that feels almost retro and encouraging at the same time. 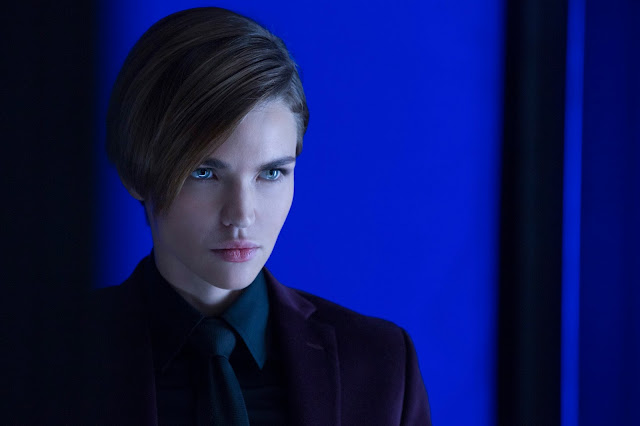 This sequel smartly boasts a few of the key players from the first film like John Leguizamo as his mechanic, Lance Reddick as the Continental's front desk guy, and the oh so charismatic Ian McShane as Winston, the guy in charge. But some of the welcome new additions include Ruby Rose (Orange is the New Black) as a mute assassin, rapper turned actor Common as a loyal bodyguard, and most enjoyably, a reunion of sorts with Laurence Fishburne, his Matrix costar, as Bowery King, chewing up his scene's deliciously. The standout for me personally was Italian actress Claudia Gerini, the victim to Wick's debt/job, who comes off as startlingly familiar, yet I just can't seem to place her. Though her screen time is limited, she leaves a strong and lasting impression, even down to the manner of her death, which comes off a bit unexpected in a good way.

John Wick: Chapter 2 gives us everything we've come to expect from an action film and tries really, really hard to top the first one and give us something we haven't seen before, and only half succeeding. It's a formidable attempt, full of style, substance and machismo, but fails to really offer anything new other than an insane amount of head-shots and long-take choreography, something that's all too rare in these films today. It's not a better film than the first one, but sometimes that's okay. It just needs to be entertaining, and for most people, that's enough.
Posted by robotGEEK at 10:24 AM