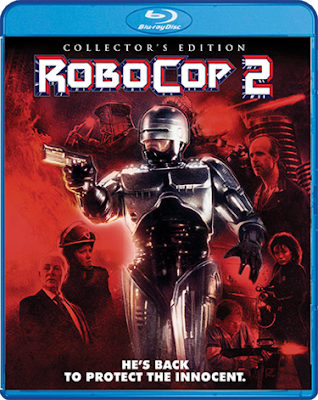 Wow. Since deciding to dedicate more time and energy into my passion, which is films and talking about them, I have been on a nonstop roll since December, with January being one of the most productive months on here for as long as I can remember. These past few days have been difficult though. I've seen a lot of stuff, but have been finding it difficult to sit down and finish a review on any of them. So I thought I'd share some exciting news about a new release that I'm all for. And that is Shout! Factory releasing Robocop 2 on Blu Ray.

Why is this a big deal? Well it's because aside from a lackluster previous release that was part of a Blu Ray set released back in 2014, we've never actually gotten a legitimate standalone Blu Ray release of this underrated sequel. Weird right? You'd think it would be one of those random titles that constantly gets cheap and plentiful Blu Ray releases that you would find at any big box department store like Best Buy, Target and Walmart. Yet it hasn't, until now.

Shout! Factory will be releasing this for the very first time as a standalone Blu Ray release with a street date of March 21st. And as with most of their releases, if you pre-order it early, you get a FREE 18 X 24 inch poster featuring brand new artwork and even cooler, you get it 2 weeks early. As it's technically a Collector's Edition, you can be sure there will be some nifty extra's in the Special Features section. However, none have been listed as of this posting. Details are sure to come soon though.

This is also going to be a significant improvement compared to that previous release in terms of quality. Any person who purchased that Blu Ray trilogy will tell you the picture quality isn't any better than the previous DVD editions, which is a shame. The main reason to have purchased it at all was because it was a bargain price that you couldn't pass up, especially if you were a Robocop fan. Yea, you might not have bothered watching the 3rd one, but to have the first 2 was worth the price alone. So finally getting a chance to own it in a vastly improved edition will really be a welcome addition to your collection.

I've always loved this film, even if it gets shit on pretty regularly. I know it's not great, and it always feels like it could have been better, like it's lacking something, I don't know; structure? Maybe some better editing? But it doesn't take away from the fact that it's a fun experience for me overall. Just the talent involved is enough to warrant a revisit. Directed by Irvin Kirshner (The Empire Strikes Back), written by legendary comic book writer/illustrator Frank Miller (Batman: The Dark Knight Returns), and costarring Tom Noonan (Manhunter) as Kane, the villain. I mean, what a lineup! And it's also one of the last films to utilize a large variety of practical effects/model work extensively before CGI began to take over. These are all fundamentally great things at it's core, yet it doesn't always work. Again, there's just something "off" about the whole thing, yet it's still not bad. I can certainly understand the flack it gets. It has a sort of cheesy/bizarre vibe that keeps you hooked from the get-go. They try, to a degree, to emulate the sort of satire-ish sense of humor that the first film did so well, but they don't succeed nearly half as well. Of course, I do realize I'm in the minority on this one. I probably love it for all the reasons other's don't, but that's usually how it goes with films I adore.

If you know anything about the production or history of this particular entry, then you know that initially Frank Miller delivered an insane and over-the-top script. I'm talking balls-to-the-walls insanity. Of course, the powers that be made some drastic changes and what we ended up with is only a shell of what was originally intended. And you can feel it constantly throughout the film. Miller ultimately ended up turning his original idea's and script into a superb graphic novel, with some incredibly detailed art by the amazing Juan Jose Ryp. Seriously, it's pretty fucking awesome and if you call yourself a Robocop fan, you need to get this in your hands.

You can put your pre-order in directly from Shout! Factory via their official website for $24.93.
Posted by robotGEEK at 5:56 PM