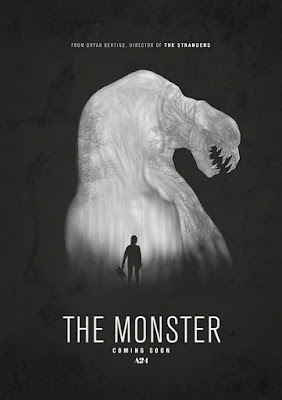 It's rare when a film like this comes out and makes waves the way it has. Normally a film of this type comes and goes without much of a whimper, yet this one is different for a number of reasons. It's been attracting a lot of buzz for a DTV flick, and after finally seeing it, I can see why. For starters, you just don't see a monster movie that spends just as much time with the dysfunctional family drama as it does with the creature feature aspect to the film. It's a very well made film too, something that kind of took me by surprise. But it's also a painfully slow one, which I'll get more into later.

I'm pretty divided over this one because there were things I liked and didn't like about it. Let's start with the positives. It's an exceptionally sharp looking film, I'll give it that. And the monster design was really great. I'm kind of sick of every design for every monster or alien these days. They all seem to follow the same exact formula, and they're very boring. Here though they take more of an old school approach and it works really well. When the film is dealing with the creature feature aspect of the story, it's solid. I also need to give major props to the young actress who plays the daughter. I can't remember the last time I was impressed by a child actor the way I was with her. I mean, the amount of torment she was subjected to emotionally was sometimes hard to watch, but damned if she didn't handle it like a pro.

Now on to the negatives. I really wasn't into the drama, especially when I went in thinking it was a creature feature, which it is, but only in part. The dysfunctional family stuff seems to always catch you off guard because most of it is done through out-of-nowhere flashbacks, and it's really these parts that always took me out of the experience. It doesn't help that the mother is also a terrible human being and I found her utterly annoying. So much so that I hoped that she would just die already. Which I guess when you think about it the films title The Monster could refer to both the mother and the actual beast.

It's a painfully slow film. Seriously, it takes it's time setting things up and crawls at a snails pace, and that's been a complaint of a lot of people. The creature feature moments are great, but the back and forth between riveting monster mayhem and dysfunctional family drama wears itself thin pretty quickly. On one hand, the acting is great; you really feel for the little girl and absolutely hate the mother, which is what the film is supposed to do, but then on the other you're kind of just waiting for the beast to return so you can get back to the film you thought you were supposed to be watching.

Overall all it's a good film, but not a great one. It could have been though, if only writer/director Bryan Bertino (The Strangers, Mockingbird) had just stuck to the Creature Feature genre and strayed away from the family drama. It's competently made, which scores it some major points, and the acting is top notch. The creature design and effects were understated but effectively awesome. If they used CGI for any of it, I couldn't tell, which is pretty amazing for a low-budget feature. It kind of all falls apart because of the dramatic elements, which really paints a depressing picture all around. And that's what this film is, exorbitantly depressing, and it didn't really need to be.
Posted by robotGEEK at 1:56 PM