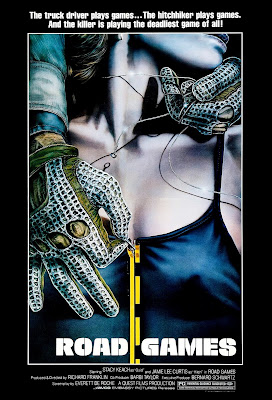 This is a film I had been wanting to get my hands on for a long time, which had been rather difficult until Umbrella Entertainment recently re-released this on DVD and Blu Ray in a Region Free format. When I first saw Psycho II, I just loved it to death. In fact, I love it more than the original film, and I think that's partly due to director Richard Franklin's work behind the camera. Sure Tom Holland's script is amazing, but Franklin adds a deft touch to anything he directs, giving it a slick sheen. I soon discovered he was also responsible for Patrick, another Aussie classic, but the real clencher for me was discovering that he directed one of my all-time favorite 80's films, Cloak & Dagger.

On the surface, Road Games is right up my alley. It has so much going for it that makes me so eager to see it. It's from the early 80's, it's a thriller, it stars Jamie Lee Curtis and Stacey Keach, and it's directed by a genre legend. So I'm pretty much sold, I just needed to actually get my fucking hands on it, which was easier said than done. Here in the U.S., we only got a single DVD release, and that release is not cheap. Even the VHS release is hard to come by and again, a bit pricey for an old tape. I was almost deciding on a bootleg burn when I heard that Umbrella Ent. would be releasing it, in it's original widescreen aspect ratio, and for a very reasonable price. So let's get started.

Road Games was a unique thriller to say the least. It was not really the kind of film I was expecting, yet that didn't bother me. It was entertaining enough that it kept me invested regardless. It's a bit hard to put into words why it was so different. I think it's tone has something to do with it. It's not as serious a thriller as I was expecting, and that's largely due to the Stacey Keache's truck driver character, who is witty, charming, and speaks in poem versus for amusement. I don't know. For me, I felt the solo scenes of Pat Quid (Stacey Keach) and Hitch (Jamie Lee Curtis) take up too much of the films attention and running time, and little else was left for the actual plot of a serial killer roaming the Australian countryside. Sure there are moments here and there, but except for the end, that aspect of the film didn't like much of a priority - the whole "cat and mouse" game that the film is supposed to play out like. Not that those scenes were any less entertaining, it's just not the kind of film I was hoping for going in.

I think what throws me off is that most of the film is focused on Pat Quid while he's alone with his dog driving his big rig. Hitch, or the hitchhiker character played by Jamie Lee Curtis, doesn't show up until halfway through, so much of the first half is dedicated to Quid just talking to himself and his do. It's pretty amusing though, and the script by Everette De Roche is pretty clever and witty with the dialogue. Even more so when Hitch, who herself is also witty, joins in and the two offer up endless banter as they play off each other in a flirty playful way. Again, I did enjoy these moments. I just found them to be too successive when I felt the film should have spent more time dealing with the mystery of the serial killer who's been taunting Quid and Hitch periodically in spurts throughout the film. In fact, he disappears for less than maybe 20 minutes out of the entire film's running time, which again kind of threw me for a loop. I mean, the film is called Road Games, so I expected a lot of actual Road Games.

Overall I found it to be a solid thriller, but not a great one. Franklin's direction is on point, and Keache really shines here, delivering one of his absolute best performances. Jamie Lee Curtis kind of seems a bit out of place here, and only seems to be around as a distraction rather than contributing anything meaningful to the film. I'm glad I saw it and that I can finally scratch this one off my list though. It's a film I'd been eyeing for ages now. To be honest, this poster art is much better than the actual movie, but that's no big surprise considering this came from an era where that was usually the case.

Like I mentioned earlier, Umbrella Entertainment recently released this on DVD and Blu Ray for a very cheap price. The print is in widescreen, and while it's not the most impressive print you'll seem the fact that it's in widescreen is a huge bonus. It also comes with a few extras such as a "making of". Really, for the price, it's worth a purchase.
Posted by robotGEEK at 12:43 PM