Growing up on healthy doses of 80's and 90's horror, I'm generally not a fan of modern day horror films. They're so different now. Too safe. Too bland. Too quick to turn a quick buck, and they'll do anything to ensure that they'll fill as many theater seats as possible by making them PG-13. They rarely ever go that extra mile to shock you anymore, and they seem more tailor made for the teen crowd, rather than the adult horror fan. With that being said, I tend to stay away from them, because more often than not, they're not very good. That's why I'm glad there's Redbox, where I can rent them for just $1.25.

I think studio's and producers have forgotten exactly what horror films are supposed to do. It seems like the only real aim is to label a film a "horror" film and to figure out how they can make as much money as possible. Sure that's nothing new, but it seems all the more significant now more than ever. An annoyance I also find with most of these new films is the casting of unnaturally looking attractive people. I miss the days when they used to cast regular looking people, like Charlie Brewster in the original Fright Night for example. Anyway, if you haven't seen any of these films yet, fair warning, there are minor spoilers ahead. 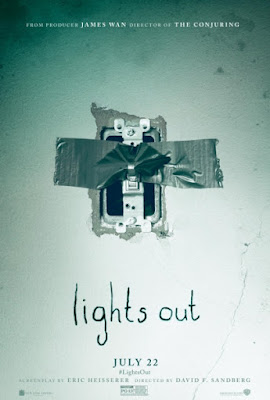 Anyway, this was alright. I mean, it wasn't great or scary or anything. I felt all the actors did fairly well, with the boyfriend walking away the most likable and endearing of the bunch. The story was interesting enough, yet there were holes that were never fully explained. Like for instance, why does she use the shadows to show up at certain times virtually anywhere, and not other moments when they're trying to escape her? Why or how is she able to appear anywhere she likes, even though most of the time it's not the one person she's attached herself to?

This is David F. Sandberg's feature film debut, who's got a list of short films under his belt before this, including that original Lights Out short. He's not the most visually interesting director, but he gets the job done, and shoots it with an even hand, which surprisingly, is one of his greatest strengths since 90% of all new horror directors think shooting fast and loose, a la shaky-cam/quick-edit, is the way to go. So in that respect, it was a bit refreshing to see a film look like it should and not like a music video or commercial. I understand this resulted in his getting the Annabelle 2 directing gig, so kudos to him for being able to successfully transition to feature horror films.

There were elements about this that I liked, like the back story of the girl, but overall, it was pretty much exactly what I expected from a safe PG-13 teen horror film. It doesn't take any chances, and it doesn't actually scare you the way a horror film is supposed to. There are are healthy doses of jump scares, but that's pretty much it. 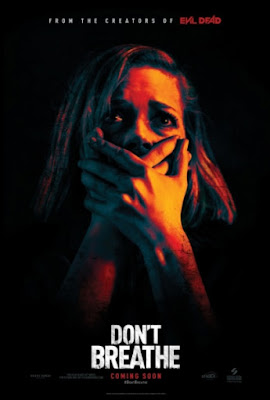 This is actually one I had been kinda looking forward to for two reasons; 1 being that it starred a favorite character actor of mine in the form of Stephen Lang, and 2 that it was written and directed by the Evil Dead remake director. Still, it's a modern day horror film, albeit an R rated one this time, so I wasn't all that ready to jump at spending $10 to go see it in a theater.

Don't Breathe was actually pretty good, and of the 3 I'm reviewing in this post, the best one of the bunch. While it still technically looks and feels like all of the new horror stuff, it does take it's chances by pushing the envelope a bit in the violence and certain situations. So that was a nice surprise. And I really enjoyed seeing Stephan Lang get a lead role. He's really one of the best and most underrated badasses in cinema still working today.

The tone was a bit darker overall all compared to Lights Out, and writer/director Fede Alvarez offers up some impressive camera work, giving the film an overall better visual aesthetic. Sure you never end up liking any of the characters, but I don't think you're really supposed to in this case. And the twist that comes in later in the film was really unexpected, for me anyway. That was an area where they really pushed the boundaries a bit in this film, and I thought it was encouraging to know there are still a few filmmakers out there willing to take that chance, even if it means putting some people off.

The more I stop and think about this one, the more I realize I liked it more than I thought. It has a nice buildup of tension that explodes in certain sequences in the film. There's some cringe-inducing violence. There were themes explored, and boundaries pushed that you wouldn't normally see in a horror film these days. And the actors all looked like fairly normal looking human beings to boot. 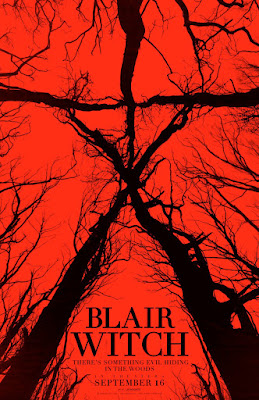 Dang. Another one bites the dust. Of any of the films reviewed here, this is one I was most excited about, only in that it was directed by Adam Wingard, who gave us 2 stellar previous films with You're Next and The Guest. I should have known trouble was ahead though when I started hearing reports that it was another Found Footage film. I don't know, for me I feel they've beat that gimmick to death. So if you're going to make the first Blair Witch film in almost 20 years, why the fuck would you just do it Found Footage again? I had really hoped Wingard and company were going to take this opportunity to take the franchise in a new direction, and breathe some new life into it. Instead they give us the exact opposite.

There are only a few new things they add to the table this time around, but even then, it all still feels familiar, tired and nauseating. I thought it was interesting they decided to actually show the actual witch this time around, yet it's only for extremely brief glimpses, never long enough to get a good look at her. And when it comes to the witch, there's so much left unanswered that it can drive you nuts if you try to understand it. For instance, what was the deal with the time lapses? What was up with the UFO lights at the end of the film? What were the young weird local couples real intentions? I could go on and on, but if you've already seen it, maybe you've already asked yourself these questions.

I found it frustrating that they attempt to tackle the whole Blair Witch mythology again, only to treat it like another typical Found Footage film, a sort of extension of the first film, when they could have really taken this series even further and more creatively. I'm guessing I'm not the only one who feels this way, as the film didn't do nearly the business the studio expected it would, especially in it's opening weekend.

I know some people enjoyed this one, and if you're into these types of horror films, I can see why. It definitely has a "going through the motions" vibe, and for some, maybe that's all they need to enjoy themselves. That's kind of how I feel about action films, so I get it. But I think we can all agree though that this was a pretty big missed opportunity.
Posted by robotGEEK at 10:03 AM