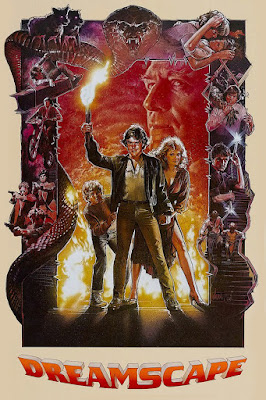 I'd always been mildly curious about this one, and when I came across it while browsing films to stream, I figured this would be a good one to add to my 80's thriller binge.

Alex (Dennis Quaid) is a young man with psychic abilities who uses his abilities to win bets at the race track rather than do anything good with it. He's recruited, rather reluctantly, to help a government agency plant an idea into the head of the United States president through his dreams. But others have a far more sinister agenda.

Released in 1984, Dreamscape has a pretty stellar cast, and a very nostalgic 80's feel to everything, giving it one of it's greatest attributes. If this film was made today, it wouldn't be nearly as entertaining or well-made. You can guarantee it would be an overly done CGI mess, with no character to it at all. Using primitive effects techniques for the many special effects sequences give the film a rather unintentional charm. Some of these sequences work well, while others do not. Unfortunately it's with these dated effects sequences Dreamscape garners most of it's reputation. Most people just think of that specific element rather than the story itself.

Dreamscape delves deep into the world of dreams and psychics, and sets it all within a political thriller involving the president. An employee with a very high security clearance wants to use these psychic abilities to do some terrible things to the president, so he recruits another psychic who has no trouble using it for evil, to do the job. When Alex and his mentor Dr. Novotny (Max Von Sydow) discover this, they use a new technology that's just been invented so Alex can infiltrate the presidents dream state and warn him of their plans.

I wish I could say I loved it, because I really wanted to. But for me, this was just okay. Joseph Ruben's direction is pretty uninspiring, giving the film an overall underwhelming look. If the story had at least been engaging, then it would have easily passed, but it's just kind of okay and blandly structured. A lot of it comes off as a bit uninteresting to be quite frank. Too bad too, because there's a really good film in here somewhere. It's a fascinating idea, and the thriller aspect of it works fairly well, until the dream sequences come into play and they just kind of take you out of the moment. This was 1984, so effects work wasn't really all that primitive, but it just looks so bad here. I don't know if that's attributed to director Joseph Ruben, or the effects producer, but they just don't work and come off as silly, when the intent was to be scary.

Let's take a look at this terribly misleading poster art by legendary poster artist Drew Struzan. It immediately invokes a sort of "adventure" vibe, and that couldn't be anymore from the truth. I feel it's really this poster that pulls you in, only to be let down by what the film ultimately becomes. Why is he holding a torch like he's an archaeologist or treasure hunter deep in some catacombs? While the images littered throughout the poster are indeed in the film, the poster makes them look cooler than they really are.

Not a terrible way to spend an hour and a half of your time, but you could spend it on something better.
Posted by robotGEEK at 11:49 AM