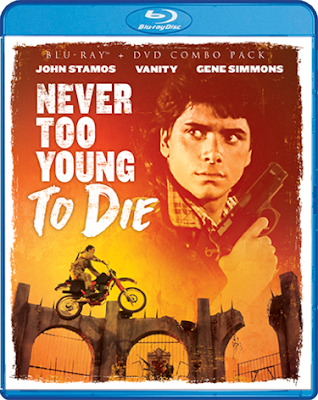 Last week I posted about one of my dreams becoming a reality. That is that Shout! Factory acquired the rights to release the 80's batshit crazy masterpiece Never Too Young To Die on DVD and Blu Ray. Really, this is 30 years coming. Outside of VHS and Laserdisc, this Bad Movie Night champion has never gotten a release since it's 1986 release. That was 30 years ago! Well, it seems I wasn't the only one who kept pestering them about it because they've heeded our call and will be releasing this cult classic for the very first time on DVD and Blu Ray here in the U.S.

They've just released the official cover art and release date. While it's not bad, it's a shame they weren't able to get the original poster art, which was pretty fantastic. They've also stated that unlike most of their releases, this will not have the original cover art as a reversible option on the sleeve, which is a pitty.

The street date is set for April 11, 2017 and you can already put your pre-order in via their official website for a discounted price of $22.99. Sadly, there are no other specifics listed like Special Features, and there might not be any because when they work on supplemental material, they usually state something like "details coming soon" or something similar to let you know they are indeed working on extras to add as Special Features. But on this listing it's not stated at all so it may be a bare bones release. Of course, that's not a terrible thing because in the least, we're still getting this for the very first time ever in widescreen and a better picture quality, so I'm still very much excited.

You can place your pre-order HERE.


Listen up, my little turdballs!
A once-in-a-lifetime cast rocks the silver screen in director Gil Bettman's masterpiece of cult cinema, Never Too Young To Die.
When a top secret agent (George Lazenby, On Her Majesty's Secret Service) is murdered, his estranged gymnast son Lance Stargrove (John Stamos, Full House) teams up with his dad's seductive and deadly associate, Danja Deering (Vanity, The Last Dragon) to face his father's killer… the fiendish mastermind Velvet Von Ragner (Gene Simmons, the fiendish mastermind behind Rock & Roll Hall Of Fame inductee KISS.) The hermaphroditic heel is hell-bent on a scheme to poison the city's water supply — and it's up to Stargrove to crush Velvet once and for all!
Never Too Young To Die also features Peter Kwong (Big Trouble In Little China), Robert Englund (A Nightmare On Elm Street, duh), and enough leather-clad, mohawked henchmen to fill a dozen Road Warrior knock-offs. You think you've seen it all? It's never too late to see Never Too Young To Die!
Posted by robotGEEK at 9:45 AM