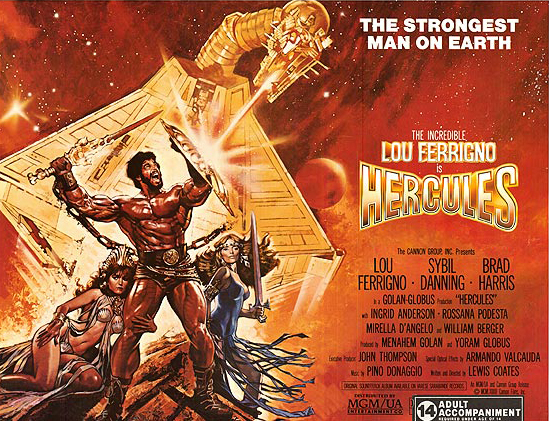 When I finally got my hands on Electric Boogaloo: The Wild, Untold Story of Cannon Films, I was instantly reminded of why I grew up on Cannon films. Their insanely eclectic output touched on nearly every genre, and their particular budget limits and turnaround times lent for some pretty amazing low-budget, grindhouse, trash that has never been able to be duplicated today. Sure a lot of them were thought of as terrible at the time, like Superman IV and Masters of the Universe, but they've since become cult classics and dearly reveled for their cheesiness, rather than abhorred by them. And when filmgeeks like myself hear of the projects that were in the works that never got off the ground, like the live action Spider-Man film that was set to be directed by Albert Pyun, well our nerd brains light up with excitement. One of the films touched up on this insanely entertaining doc was this early 80's low-budget Italian production under the Cannon Films banner. One scene in particular stood out while they flashed a bunch of random scenes from this film. It was of Hercules fighting with a bear, grabbing him by his tail and throwing him up in the air with such force that he literally flies into space. I'm telling you, that image left us all howling with laughter and that was catalyst for me tracking this film down. My only hope going in was that the rest of the film could somehow live up to that one scene. Little did I know that the "bear flung into space" scene was nothing compared to the sheer insanity of the rest of the film.

It's hard to tell what was going through the minds of those involved in making this. Initially you think it's a family friendly film, and really, it does play out like a film you'd see on TV on a Saturday afternoon. Yet every female in this is practically nude. I mean, it is technically PG, but I'm kind of shocked at how skimpy and sexy every female's costume is in this. They're so skimpy in fact that they leave very little to the imagination. But hey, I'm not complaining. 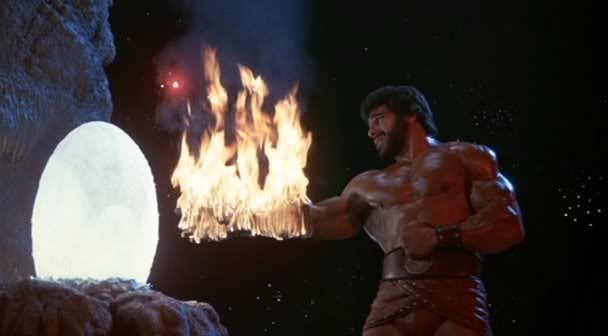 Essentially, writer/director Luigi Cozzi (Star Crash, Contamination) takes the very basic elements of the Hercules story, and takes huge leaps and bounds with the myth and legend, completely turning it on it's head. The directions he takes this story is nuts! Not being satisfied with the typical legend as we already know it, he mixes in elements of steampunk, robots, lasers, outer space, and last but not least, SCIENCE!!

This was produced by none other than Golan-Globus Productions, or as they're better known as Cannon Films back in 1983, right at the start of their dominance in the low-budget market. I don't know about you, but for me, just knowing that this is a Cannon film makes it all the more better. This entire thing carries that very specific Cannon quality, and it's a quality I worship and love to death. But it's also surprising in the sense that most of the practical effects work is actually really impressive. There are real sets, and shockingly large at that. They implore numerous composite shots to varying degrees of success, but that's also a large part of this film's charm. In the hands of someone who's not a master in dealing with large effects such as this, the film can suffer by looking cheap. Thankfully writer/director Luigi Cozzi, while no master, does a competent job for the most part. The insane effects that do work, work really well, and the parts that don't, look cheesy, silly, and cheap, but still in a very fun way. So in an odd way, the good and the bad both work in it's favor. I think what tends to get overlooked (probably because of the cheesy dubbing) is the effects work, and the grande scale they tried to take it. If you pay closer attention to it, you might be impressed. 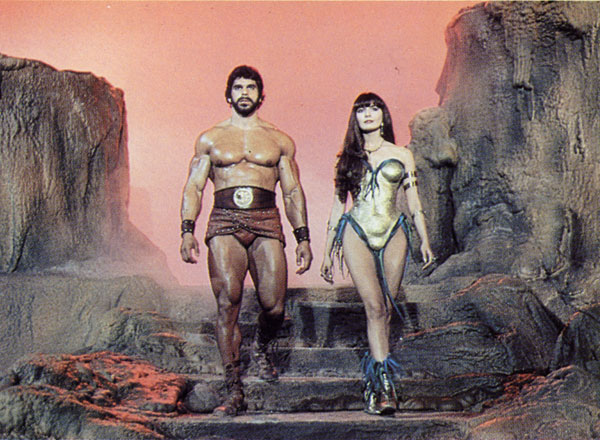 Lou Ferrigno was just perfect casting with this. The fact that his voice was dubbed only adds to the films immense entertainment value. We all  know he needed it because of his speech impediment due to his lack of hearing, but even if he didn't, it made the experience all the more genuine. What really fascinated me though was how Ferrigno exudes so much charisma through his body language. Even though his voice is dubbed, you sense the genuine talent in his facial expressions and movements. You get that despite his speech impediment, the guy can still act and act well. Physically and emotionally, he is the perfect Hercules. Audibly, some other guy provides the voice. But let's be honest, the guy is a monster. He's huge, and his perfect physique fits the role well. He acts like a Hercules, but most importantly, he looks like a Hercules.

It's not only Ferrigno who gets dubbed though. Being an entire Italian production, even though there are actors littered throughout from various countries, like Austria's Sybil Danning, the entire cast is dubbed. I actually enjoyed this. It really adds to the camp/cheesy factor, and hey, it must have made Lou feel good that he wasn't the only one.

We had no idea what to expect going into this. All we hoped for was a good time, and Hercules delivered that, in spades. It's hilarious, strange, awesome, and we constantly yelled "WTF?", "Huh?", or "You've got to be kidding me" on a regular basis. It was such a blast, filled with so much spirit and passion, resulting in one of the cheesiest and most fun experiences we've ever had. This film is so much fun, and such a trip. I couldn't imagine anyone seeing this and not being completely blown away and enthralled by it's endearing camp factor. If you don't end up enjoying this, then you just don't know what a good time is.

Director Luigi Cozzi and Ferrigno reteamed 2 years later for the sequel The Adventures of Hercules II, and we couldn't be anymore excited. If it's only half as entertaining as this one, we're in for a real treat. 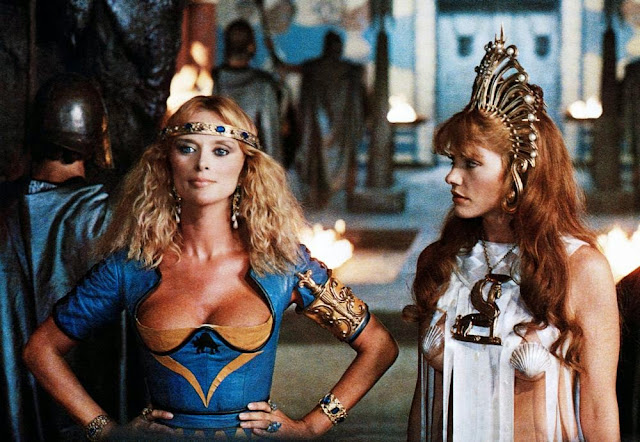 Hercules and The Adventures of Hercules II are available on a DVD Double-Feature from MGM that you can easily get for around $5. They were initially released on VHS in those big MGM Big Boxes, which is how I saw it. You can also stream it for $2.99 on Amazon. There are blu ray's out there that were released outside of the U.S. as part of The Cult Movie Collection from Digital Classics that are not cheap.
Posted by robotGEEK at 10:08 AM