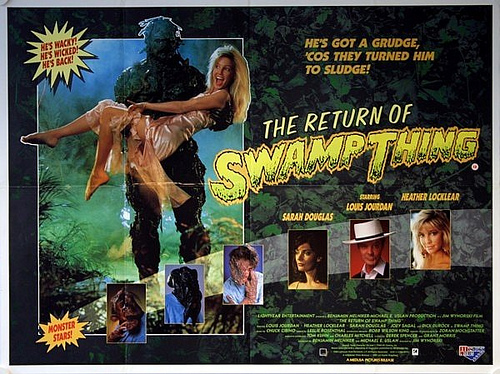 
"He's Got a Grudge 'Cos They Turned Him To Sludge!"

I have no hangups admitting that I'm a pretty big fan of Jim Wynorski's stuff from around this time. For me, his 80's and going into the 90's ouput is pretty much his best work. While it's not necessarily "quality" work, I do enjoy some of it and his specific way of making films works well for some of them. Like Chopping Mall for example. Yes, it's very cheesy, dated, and a bit unintentionally silly. But those are also reasons why it's so great and fun. So when I learned that he was responsible for the Straight-to-Video sequel of Swamp Thing, it was only a matter of time before I got my hands on it. Other than Wynorski being at the helm, the only other thing I knew going in was that this sequel would take a much lighter and more campy approach to the material, pretty much doing a 180 from Wes Craven's dark and serious tone in the original years earlier. So let's dig in.

First thing you'll notice immediately is that this is a very different take on the character and franchise. But you know, I enjoyed it. It never strays too far into cheese or camp. It kind of just teeters on it without becoming too annoying. Yes, it's campy. There's no way around that, but it's never done in an overindulgent way. It's actually a bit charming. I don't think I ever rolled my eyes once, which says a lot. I also feel compelled to let you know that the movie itself isn't anywhere near as funny or silly as this poster leads you to believe, and that's a good thing.

I'm not going to gloat over this thing and say that it's amazing, because it's not. What it is though is fun, and if you can handle the huge shift in tone from the first film's starkly dark nature, you'll have a good time with this one. It doesn't take itself too seriously, but it doesn't stray too far into cheese or camp either. It just kind of dips it's toes in it, straddling that fine line just long enough to make it campy fun without becoming obnoxiously cheesy. But come on, just look at that cover. You have to expect a bit of that going in.

There are a few things this film does well though that will make it passable for most of you. For starters, Swamp Thing looks fucking awesome. I'm talking leaps and bounds better than his look in the first film, which comes courtesy of the Todd Masters Company, who did the effects work on this film. In fact, it's hard to take your eyes off of him whenever he's on screen because he just looks so amazing. Though it's the same stunt guy playing Swampie from the first film, Dick Durock, they made him bigger and much more muscular. Durock is already a big guy, but they really went all out to make him larger than life, including the other monsters he ends up battling throughout the film.

Louis Jourdan once again returns as the villain Dr. Arcane, but we're also treated to the always enjoyable baddie Sarah Douglas as Arcane's sidekick. Heather Locklear is the headliner here though, and well, she does fine with the material she's given, which isn't saying much. Personally, I find her kind of annoying, mostly due to her delivery, but her lines don't help either. In the film she plays a sassy and tough step-daughter to Dr. Arcane who comes for a visit in hopes of proving he was responsible for her mother's death years ago. She runs into Swamp Thing, and naturally falls in love with him. Together they join forces to defeat Arcane and put a stop to his monstrous experiments. See? Doesn't that sound like fun?

Wynorski's direction style suits the material well, and while he won't win any awards, the way he effectively shoots it and puts it all together works far better than most others who would have tried to tackle this project. What can I say? I'm a sucker for this kind of stuff when it's done well, and Return of Swamp Thing is done well. I could have done without the 2 annoying kids that pop up from time to time, but as a whole, it's a fun time.

I should also note that it's produced by Benjamin Melniker and Michael Uslan, who also ended up producing Tim Burton's Batman this very same year, which would go on to make history. So there is some legitimate talent here and it shows. Sure people will always mention the fact that it's low-budget and cheesy, which is true, but it's also a very solid film from beginning to end, fun, campy and everyone brings their best to the table. It never overstays it's welcome and proves that if you have just the right combination of talent at just the right time, you can deliver a film that truly captures the spirit of that very niche genre.
Posted by robotGEEK at 1:41 PM