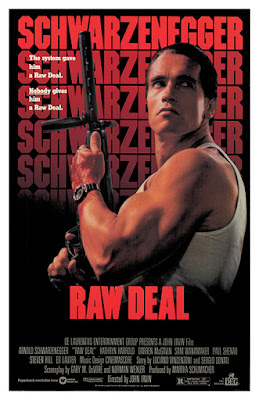 I've always considered this my least favorite of Arnie's films. Sure there are others I've only ever seen once and probably won't watch again, but this one always stood out as one that I just personally didn't like at all. It does have a strikingly awesome cover though, I'll give it that. As you may know, I've been on an 80's thriller kick, so I wondered if maybe my opinion of this film would change if I watched it with other films that are in kind of the same genre? I threw it on and hoped for the best, because you never know.

Raw Deal just isn't very good. I think one of the only things that really saves it from being totally forgotten is that it stars Arnold Schwarzenegger. If he wasn't in this, you can bet your ass this would have disappeared into oblivion. It's a shame too, because it's not a bad story. Tired, but with the right script, it could definitely work. One of the biggest problems this film suffers from is that it just looks and feels like a Made-for-TV movie. You would never have assumed this ever made it to theaters, and if it hadn't starred Arnold in his prime, then it most definitely wouldn't have. It's a pretty forgettable throwaway film, one that they would add to box sets or these 4-Film Collections that you find at Target, Walmart and discount stores.

It's kind of a tired premise really. Small town cop, sheriff in this film, gets tapped to go undercover and infiltrate an Italian mob. They flesh it out a bit more here though. Kaminski (Schwarzenegger) is a small town sheriff who's unhappily married and only working this job because it was the only one he could get after something that went down years earlier. When an old FBI friend of his reaches out to him with the promise of possible reinstatement in the bureau if he helps him track down his son's killer, he accepts the covert off-the-books job. He's miraculously able to accomplish this solely through charm and brawn in a shockingly short amount of time, because he's Arnold Schwarzenegger.

Raw Deal has it's fair share of pro's and con's, with the con's far outweighing the pro's. On the plus side, the cast is pretty cool, with a young Robert Davi, as the mob boss's main "bodyguard/problem-solver", stealing scenes left and right whenever he's on screen. One of the things that surprised me, though it shouldn't have, is that despite the very limited role, Arnold Schwarzenegger really delivers the goods. Limited in the sense that there's just not much depth to the character, and you can't really take it very far. But Arnold gives it his all, even though in reality he's so terribly miscast here. It's really hard to look past the fact that this Austrian giant with such a pronounced accent is trying to weesle his way into the Italian mob effortlessly, yet you buy it in an unrealistic way because he's so damn charming and charismatic.

Arnold was really hitting his stride as a hit-maker when this came out. He had already delivered 3 solid hits with Conan the Barbarian, The Terminator and Commando. He would then go on to make Predator the following year, so for him to take a chance and risk losing his momentum on this little film when he was on easily the biggest winning streak of his career says a lot about his drive and how badly he wanted out of his contract with mega-producer Dino De Laurentiis to pursue "his" projects. In the end, Raw Deal is but a small bump on an otherwise smooth road until his star power began to fizzle in the late 90's. Sure there were thuds like The Running Man and Last Action Hero to name a few, but he'd always been able to bounce back bigger and better, and thankfully Predator was his follow-up to this stale and mediocre affair, thus proving my point.

We all know that Arnold only made this film to get out of his contract with De Laurentiis, so he could pursue other bigger projects. Dino, in a very characteristic way, would allow Schwarzenegger to get out of his contract if he starred in this little film he owned the rights to, and hoped that by casting Arnold, a fast rising star, that it would have turned a healthy profit so that he could gain the funds to make Total Recall, another film he owned the rights to and so desperately wanted to make, back in '86, even though he wouldn't allow Arnold to star in Total Recall if he made it fearing he wasn't ready for such a large project. On the plus side, it got Arnold out of his contractual obligation with De Laurentiis, but on the negative side, it didn't do well at all, so Total Recall would have to change hands, companies, and wait 4 years before it could finally get made. So there's the little Raw Deal history, just in case you didn't already know. With that being said, I think we can all thank the stars that Raw Deal bombed and De Laurentiis wasn't able to make Total Recall when he initially wanted to and that the rights instead fell into the hands of Carolco Pictures and director Paul Verhoeven 4 years later. There's usually a silver lining, and in this case, that couldn't be more true.
Posted by robotGEEK at 1:09 PM