Godzilla 1985 AKA The Return of Godzilla Film and DVD Review 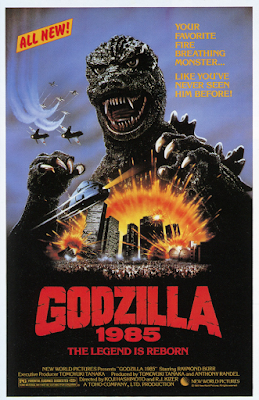 I remember seeing Godzilla 1985 in theaters back in 1985 as a kid. I must have been all but 9 or 10 years old. Incidentally, I don't recall anything from that experience, other than always being really attracted to the poster art. It wasn't until just this past year or so that I discovered that it's actually called The Return of Godzilla (as it's known in it's native country), and that it was re-edited, severely cut, and inserted with humor to help Americanize it here in the states, which really took away from the dark and serious tone they initially tried to accomplish with this one. By this time, the Godzilla franchise had taken a 10 year hiatus because the low-ball, low-budget and cheesy direction it had gone had worn itself thin. People were over it. So with this one, they wanted to go back to it's roots and deliver a straight sequel to the very first film, making it dark and serious. Utilizing new effects techniques, they wanted to give the film a bigger scale, while also sticking to the "man in suit" method that made the franchise what it was.

I have to say, The Return of Godzilla is probably the best Godzilla film I've ever seen. Granted, I haven't seen every single one of them, but I have seen the original, and every big budget U.S. interpretation. I've caught a few of the paint-by-numbers and endless sequels here and there, and of all those I've seen, this film is easily the best and most entertaining I've come across. Having finally revisited it, I can certainly understand it's appeal, cult status, and lasting legacy. Thanks to Section 23, who just re-released this film in it's original Japanese cut and in widescreen for the first time, we are finally able to see the film the way it was intended in all it's glory.

What makes this film so different from the others, even the U.S. remakes/reboots, is that this looks and feels like a classic Godzilla film, only bigger and better. Sure there's still a lot of political talking to sit through, but they never overstay their welcome. Plus, the man-in-suit action is pretty spectacular. Though it's still a lot of models and a guy in a funny looking rubber suit, it seems the 10 year hiatus did the series some good as the model and effects work is much more epic this time around. It just looks awesome, and not cheesy in the slightest. It's so full of charm and passion in fact that it could easily be called a love letter to the franchise, because in a sense, it is. They wanted to keep the same elements that made the franchise so popular in the first place, namely the impressive model work and man-in-suit mentality, but they also wanted to stray away from the elements that gave it the ignominious reputation it had endured for decades prior, and take it back to where the series started, with a serious tone and none of the cheesiness. They've pulled it off in spectacular fashion here. 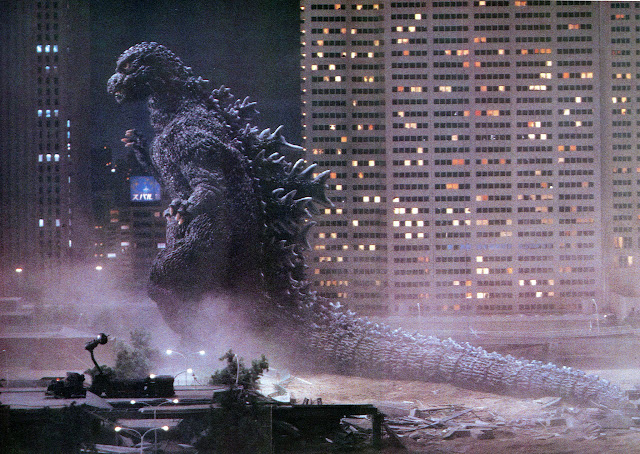 I have to be honest, that serious tone threw me off for a bit because I'd seen so many of them be just plain goofy. It was a bit surreal to sit there and wrap my brain around the fact that I was watching an older Godzilla film, but one that was dark, gritty and violent. To think that a film 33 years old was able to do what 2 big budget Hollywood films made in the last 20 years "still" hadn't been able to do says a lot about how much passion and talent was used to make this one.

It was a big deal when we got a Godzilla reboot courtesy of director Roland Emmerich and his writing partner Dean Devlin back in 1998, but we all know what happened there. He attempted to bring some of the magic that made his earlier films such as Stargate and especially Independence Day such big hits, only I think he strayed too far into the light-hearted area, and the effects work just wasn't up to par for such an effects heavy film. Emmerich had always been known for being able to deliver some great effects heavy work on a budget, and making it look good. But when a film relied so heavily on effects as the driving force of the film such as Godzilla, they just didn't meet our expectations. And then there's the whole design of Godzilla himself. Emmerich and company decided "unwisely" to do an overhaul of the character. Let's just say most people were not happy with his new lizard-like appearance this time around and the film did not do so well, and certainly not well enough to jump-start a new franchise.

It would take another 16 years for the U.S. to attempt another Godzilla reboot, and this one fared much better. While it was a much better looking film and they did their best at offering up a straight-up Godzilla reboot, it still feels like it's missing something and doesn't quite hit the mark. It's not a bad film, but it's not a very engaging film either. It does suffer from numerous problems, like the casting of Aaron Taylor-Johnson in the lead, who comes off as insanely boring and dull. The new Godzilla design was a lot better than the '98 version, but still didn't get people really excited him after the film was released, at least not in the way they had hoped. On the plus side though, I was not expecting him to fight another big monster, so that was an unexpected and welcome surprise. I'm not sure where the state of the U.S. franchise currently sits. While it did well, it wasn't the massive hit they were expecting, and 3 years later, we still don't have any word on a sequel.

All this goes to show that people take their Godzilla seriously, and when you don't deliver, well then your target audience will not be happy. We're not going to just sit back and take any Godzilla film you throw at us just because you call it Godzilla. Attempting to reinvent the series has so far proven futile. Just stick with what we know, and what we like, and it will all be okay. The Return of Godzilla aka Godzilla 1985 is a good reminder of that. We're a full 33 years later after it's release, and it has held a near legendary Cult Status since then and remains the best Godzilla film next to the original. 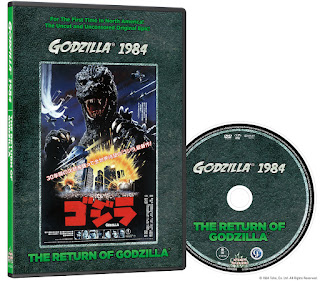 The DVD and Blu Ray from Section 23:

As for the release itself, it's okay. The picture quality is not nearly as pristine as I had hoped, but it's not bad either. It does come in widescreen (a HUGE plus), because you get to really take in the grande scale they were really going for. It's in it's original Japanese language with English subtitles also, scoring some solid points. A trailer is included, which is ultimately a double-edge sword. It's a great trailer, and really puts a lot of excitement into just a few minutes, but it also shows you how vivid and striking the colors were originally, and sadly, the presentation here on the DVD and Blu Ray doesn't quite match that. Colors appear a bit more washed out and flat in comparison. Not a huge deal, but when you watch the trailer, you can't help but wonder how amazing the film would have looked had they been able to match that strong and vibrant color palate. Regardless, the DVD and Blu Ray comes extremely affordable. You can pick up the DVD for under $10 and the Blu Ray for under $15 at numerous retailers.

UPDATE: 1/25/17
It was just announced that Krampus and Trick 'r Treat writer/director Michael Dougherty will be directing Godzilla 2 after having spent months on the script with his writing partner Zach Shields. Godzilla 2 is set for a March 29, 2019 release and Godzilla vs. Kong is set for a May 22, 2020 release.
Posted by robotGEEK at 12:23 PM