Documentary Dynamite: You're So Cool Brewster! The Story of Fright Night 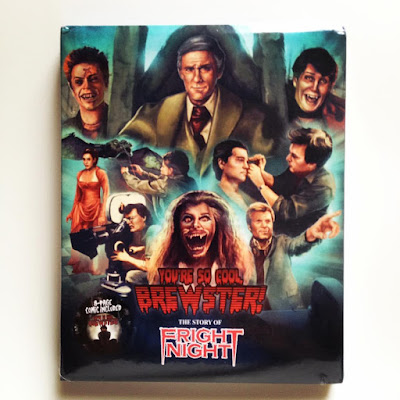 With the success of Leviathan: The Story of Hellraiser 1 & II, the documentary filmmakers set their sights on their next project, this time dealing with the Fright Night franchise, specifically Fright Night (1985) and Fright Night Part II (1988). When the company announced that they would be starting a new Kickstarter campaign to fund the project, I immediately put down my pre-order for the Blu-ray/DVD combo. That seems like it was at least over a year ago, and for all I know, maybe it was? Last week I finally received it in the mail and I'm here to tell you, it was well worth the wait.

You're So Cool Brewster! The Story of Fright Night was such a blast from start to finish. I'll admit, I was a bit worried since I personally found Leviathan to be on the boring side. But whether there was some unanimous feedback that shared my sentiment, or if the filmmakers themselves made this decision on their own and wanted to try a different approach, it worked. This one is so much fun, lively and engaging.

One of the best things about this that you'll notice immediately is that they integrate little segments of a Peter Vincent impersonator (Simon Bamford) to announce each segment. It's a bit jarring at first, because this guy is so hammy that it's more of a caricature rather than an impersonation, but you end up starting to enjoy them because ultimately, they're pretty funny, clever and he's having such a great time doing it. When it was all over, I enjoyed these little bits so much that I told my wife that I wish they would make a show just on his character because it so much fun and legitimately funny.

If you're a fan of the film series, then this documentary is a gold mine of information and behind the scenes stuff. I'm telling you, at 3 hours long, I could have kept going on for many more. Whether they tackled the writing process, or how Tom Holland fought to get the directing gig, or the now legendary score by Brad Fiedel, to the practical effects work, they do such an amazing job at keeping it fun and never gets tedious. They literally touch on every single aspect of making this, including the casting and even the poster art (!!), which is an experience that just keeps on giving and giving. 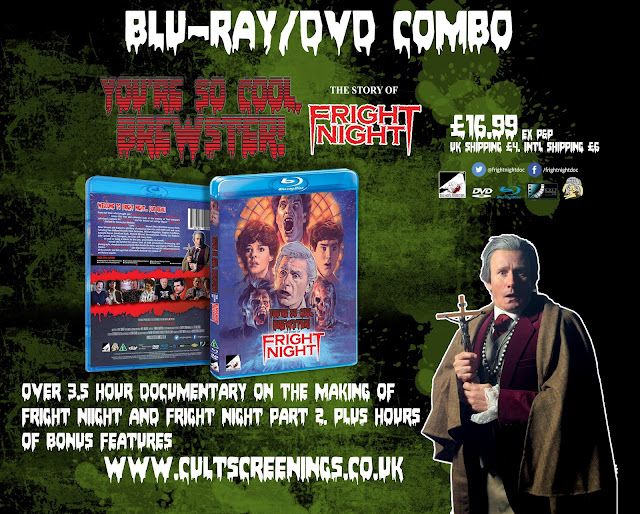 When it comes to it's much debated sequel from director Tommy Lee Wallace (Halloween III), it's just as detailed, fascinating and informative. I personally always found the reveled sequel to be my favorite. While logically I know that the first film is a better film, I've always felt that the sequel is a much more fun experience and doesn't get the credit or recognition it deserves.

In regards to the sequel, they do ultimately touch on why the film never got a theatrical release, and why it never really struck a chord with the fans of the first film. And while the topic of it's insanely limited DVD release is mentioned, it's never made clear why we still haven't gotten an authentic true blue widescreen release with all the bells and whistles in the U.S.

One of the most fun aspects of both films is that they ask several questions we've always wondered, and do their best to try to answer them. For instance, what was Billy Cole's relationship to Jerry Dandrige? And what exactly was he? Or in the sequel, what was Louie (Jon Gries)? Was he a werewolf, vampire or a hybrid? I love that they brought all of this up.

I have to give the documentary crew credit. They really went all-out with this one, getting nearly every single person involved in the cast of both films to do an interview. It was fascinating seeing them recall their experience, how fond they were of the film, the director and their coworkers, and how they each brought little aspects of their own to each character.

The DVD/Blu Ray combo also offers a healthy dose of Special Features, so trust me when I say you will want to make an entire day of this. This easily ranks as one of the best Behind-The-Scenes Franchise documentaries I've seen. They set their sights on making an entertaining one, and ultimately ended up making one of the best. Be prepared, because if you don't already own them, this will automatically want to make you track down the 2 films and soundtracks.

You can currently purchase this incredible doc directly from the manufacturer Cult Screenings UK (they ship internationally) in a Region Free DVD and Blu Ray for a ridiculously cheap price HERE.

With the great job they did with this one, you'd think that they couldn't top themselves. But they very well may because they are smack in the middle of their 3rd documentary, this time on none other than the Robocop franchise titled Robodoc. As they're still working on it, there's not release date set yet, but you can follow them on their Facebook, Instagram and website pages for any updates.
Posted by robotGEEK at 9:57 AM