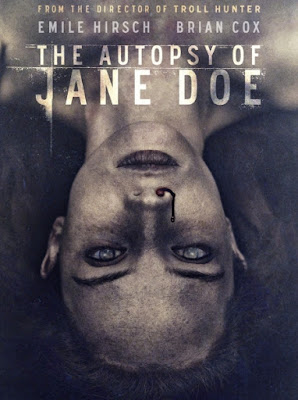 This is a film that kind of snuck up on me from out of nowhere. I hadn't heard of it, seen any trailers, or even come across it while browsing streaming sites. Usually these kinds of films really need the Independent festival circuit to generate buzz, and still, I hadn't heard of it from any of them. I was told through a friend that I should check it out because it was awesome, and when I did a little digging, it turns out that there are actually a lot of people who really like it, even though it's received practically zero promotion. Still, new horror films have not been sitting well with me as of late, even if a director I admire is behind the camera. So I still went in with some reservations and other than the fact that it starred Brian Cox and Emile Hirsch, and was from Troll Hunter director Andre Ovredal, I knew nothing else about it so I went in fairly cold.

I really, really liked this one a lot. There are so many unique touches that makes this one stand out from the crowd of most new horror stuff, either in the low-budget DTV market or big budget theatrical releases. For one, the story is quite unique. The dead body of a girl is brought into the morgue late at night under mysterious circumstances. Immediately the father and son coroners suspect something is aloof and that things just aren't adding up. The story is told through the coroner's discovery of every new detail they find, and how odd these details seem to be. Through experience and some research, they slowly begin to unravel what's really going on with this perfect female specimen that's laying dead on their table. For me, this was one of the biggest and best things TAoJD has going for it. By taking an unconventional approach to telling the story, we're going along for the ride as the story progresses with each new discovery. It's a novel idea and one I hadn't seen before where the majority of the film takes place inside this one room. You'd think that it wouldn't be very interesting, or the single location idea could wear thin after a while, but trust me, it doesn't.

I feel that a lot of what makes this so successful as a film is director Andre Ovredal. For a film that has so many constraints such as shooting primarily in a single room, and repeatedly showing a dead body on the table, he really does a fantastic job of making it look stylish and interesting. He never uses the same camera setup or reuses any previous shots. Somehow he's able to make it look slick and repeatedly finds ways to shoot it differently than the previous scene. It's pretty damn impressive if you ask me (and I know you are not), and keeps the film consistently interesting visually and aesthetically.

Aside from being a great looking film, one of the things that took me by surprise is where the story ultimately leads to. It's nothing hinted at in the beginning, and it was a nice twist that really caught me off guard in a good way. I won't spoil it for you, but there are elements to the story that really move it into a direction I had not anticipated and it only made it better.

This one of the biggest films to come out in some time that really has people divided. When I mentioned this on Facebook, it got a lot of people interested who hadn't seen it yet. On the plus side, it got a lot of them to track it down and watch it immediately, but on the negative side, it really surprised me that a good half of them thought it was just okay. Those that didn't like it much based it on that they didn't find it scary. But really, what films are these days? Those that did love it did so because of how well it was made, and how different it was in it's execution. I fall into the latter category. I loved it and I hope you will too.

It's difficult to discuss this film any further without potentially giving away too many key plot points that you should really discover on your own. It's more fun that way. So I'll leave it here and just tell you that of all the new horror I've seen recently, this is easily the best of the bunch and a very welcome surprise.

Currently as of this post, I'm not aware of it being available on any physical format at the moment, but you can rent/stream it on Amazon.
Posted by robotGEEK at 9:28 AM