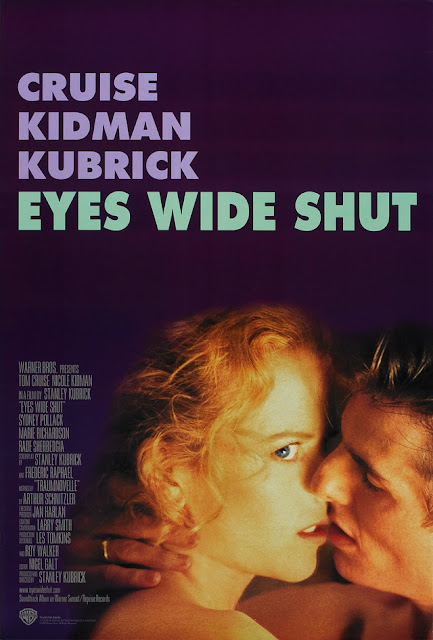 I can truthfully say I have been a lifelong Kubrick fan. I remember being a kid barely cracking 10 and loving Full Metal Jacket when it first came out. And I remember always being scared to death of The Shining whenever it would pop up on television back in the 80's. 2001 still remains one of my Top 5 All-Time favorites, and A Clockwork Orange is one I revisit often. So when I heard he was coming out of a 12 hiatus to direct a a suspense film called Eyes Wide Shut, I got excited. Really excited. So my 23 year old self took my butt to the theater to see another Stanley Kubrick masterpiece. Or so I thought.

Needless to say I didn't enjoy it......at all. I found it to be dull and boring. That was nearly 20 years ago and really, that's all I can remember from that experience. Recently I came across a documentary about Kubrick and when it came to Eyes Wide Shut, some of the production crew were discussing it very fondly, and that Kubrick was so passionate about it, and that while it didn't do well initially, people have grown to love it in the preceding years. When I brought it up recently on Facebook, there were a few who shared the same sentiments, so I was even more intrigued. I figured 18 years was a good gap between viewings. Maybe my 40 year old self, older and wiser and maybe even more matured, could appreciate it more this time around?

Not at all. There was so much I didn't like about this particular film (most notably Kidman's terrible performance) that I don't even know where to begin....but I'll try. Let's start with Nicole Kidman and Tom Cruise. We all remember that at the time, they were huge, and the Hollywood couple. When it was reported that they would both be costarring in Kubrick's first film in 12 years, it was a huge deal. Their star power was insurmountable. However, revisiting this I was struck at just how much I did not like Kidman's acting, at least in this. Oh man, what was going on with her? Her American accent felt off, forced and completely false, while her delivery was even worse. I'm sure I can attribute that to Stanley Kubrick's direction, but holy hell why did every single line of dialogue have to take forever to droll out of her mouth? Did you ever notice in this film that she can't just speak or answer a question without repeating the question that the person asked her first and then replying, but in a very sloooooow waaaaaaaaay. It doesn't help that there's nothing interesting about her character either. She's portrayed in such a negative way that you find it hard to identify with her in the first place. She's extremely confrontational, and takes any reply as an attack.

Tom Cruise fared better. He's not totally unlikable, but much like with Kidman, the way it takes forever for any line of dialogue to come out of his mouth, and how half of that is devoted to his body language before he can get a word out really gets aggravating. The way these sentences and conversations between characters are structured make things take 10 times longer than they need to be. Nobody ever says what they mean, and no conversation is ever fully fleshed out. You get bits and pieces of a sentence, but they're never fully spoken audibly in nearly every single conversation between any two characters. It's so odd.

The film focuses a great deal of it's running time to dialogue, with a great deal of it not ever delivering anything with impact. There are many long conversations that will bore you to death. One sticks in my mind almost immediately. It's towards the beginning, after they attended the fancy party and are in bed while Alice (Kidman) smokes a joint, only to become aggressive, confrontational and defensive, resulting in her telling her husband Bill about a moment years earlier where she actually considered cheating on him. It's this very conversation that ultimately becomes the catalyst for the story. Everything that follows is a direct result of this shocking (to Bill anyway) bit of information. Basically she laughs at Bill's (Tom Cruise) confident stance that she would never cheat on him. So she tells him that she thought about it once, and that moment would have been the perfect time to do it. She didn't actually do it, she only thought about it. But this reveal shatters his world and his trust, thus sending his emotional state into a downward spiral. The funny thing is that while she was telling this extremely long and slow story about this sailor she wanted to fuck, the slow buildup was so drawn out that you expected the reveal to be much bigger, and when it's done, you kind of sit there thinking "That's it? She thought about fucking him but didn't?". 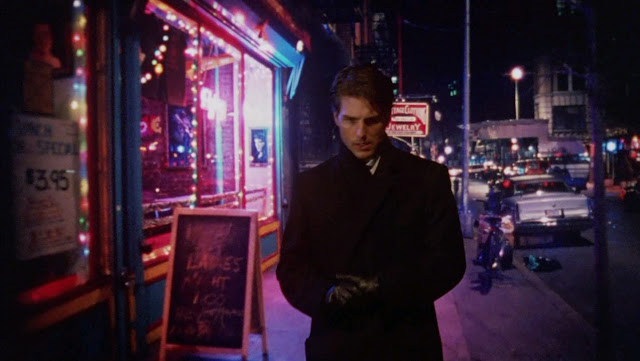 Aesthetically, I personally found this to be Kubrick's least interesting film visually. I know he had a lot of hidden meaning, nods and messages littered throughout. In fact, we could spend the entire post debating on all those things. There are many articles and blog posts devoted to that already though. But I've always felt Kubrick had a very specific visual style. He's always implored the long steadicam shots, but he always mixed it with some really amazing tracking and still shots. Here though he seems to stick primarily to the steadicam for nearly everything, and it really lacks the punch nearly all of his previous films had. Here it comes off as lazy, or even worse, dull. Even the city shots, where I thought he could really do something great, were just as bad. And that's another thing. Whether you knew it going in or not beforehand, you can just tell that that was not really New York City. It just felt and looked fake.

Kubrick has never been a flashy director, but there was always a consistency to his style. Every film he directed carried a lot of his very specific trademark techniques, one of them being the long steadicam shots. I felt with this film in particular, especially with it's New York City setting, there were prime opportunities for some really great camerawork. But I didn't find any. There were moments where the camera would do a pan shot with the steadicam rather than a dolly and it just didn't look or feel the same. It comes off as rushed and improvised instead of planned. The secret society house sequence is another missed opportunity. It's in this sequence where the film takes a big detour, and looks and feels unlike anything in the rest of the film. He utilizes a consistent color them throughout the film, but changes that drastically when we get to this part of the film. Again, I had hoped this would mark a change in technique for the film, giving him an opportunity to implore some different camerawork, but sadly that's not the case. We are again treated to long repeated steadicam shots as Bill wanders through the house. 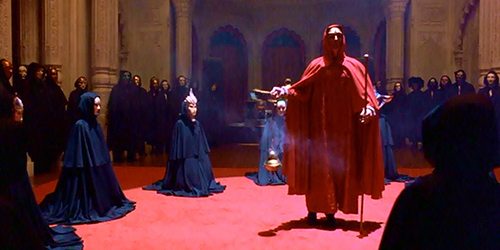 I think that had the film been at least visually arresting, I could have let it slide. The fact that it's slow isn't enough for me to dislike a film. I love slow films. In fact, they're some of my favorites. But if they're going to be slow, or more precisely....boring, then they need to at least be interesting on a visual level. And this film is not, which made the experience all the more torturous and tedious to the nth degree. We all know that nothing happens in a Kubrick film unless he specifically wants it that way. He's one of the only filmmakers to have total control over every aspect of his films. Or maybe he's the only one? So I have to wonder just what he had in mind and what he was thinking with this film, because while it does carry a lot of very specific Kubrick elements, it's still comes off as very un-Kubrick in many ways.

Another gripe I have that I just can't shake off is how we as the viewer are not given a lot of information. There are a lot of unanswered questions. For example, the secret society. I don't necessarily need to have everything spelled out for me, but "some" information on this whole thing would have been nice. Even after the film is over, all we know is that it's a very secret society that likes to host orgy's while masked and cloaked. We are told that they are very important and prominent figures in New York society, but that's about all the info we ever get. What's frustrating to me is that this secret society plays a huge role in the film, yet we don't know anything about them. I won't bore you with my many questions, but a few of them are: What is their purpose? Why do they resort to murder to keep their secret if they're just orgy's?

I guess the word that best describes my experience with this film is tedious. There are moments when I think hard about it and I want to call it pretentious, but that just wouldn't be fair to Stanley Kubrick. At least to me. It makes me sad that he ended his career with this film, instead of going out on a high note. As I watched the film, I couldn't help but feel that there was so much fat that could have been trimmed out to help move it along a little smoother. I constantly found myself staring at the running clock on my blu ray player since I knew it was 2 hours and 39 minutes, I wanted to see how much more I had to endure before it was over. That's never a good sign.
Posted by robotGEEK at 9:58 AM