Never Too Young To Die Comes to Blu-Ray! 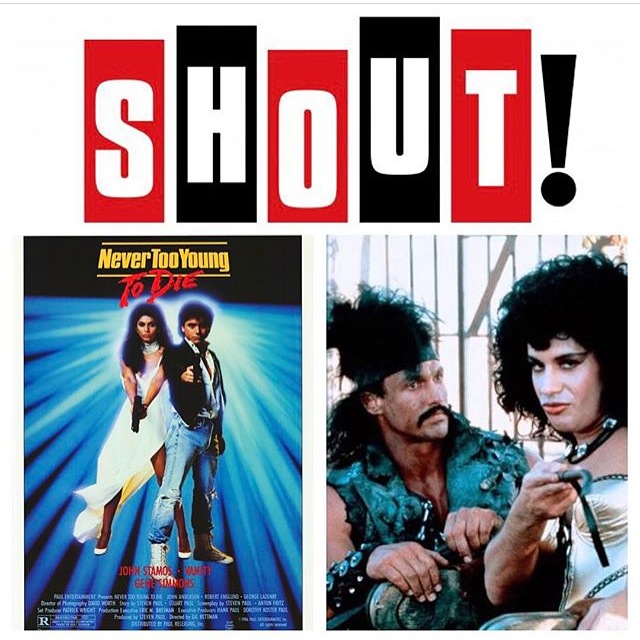 This morning couldn't have started off any better. What a great bit of news to really get the day going. I just learned via Rupert Pumpkin Speaks instagram page that one of my all-time favorite films is FINALLY going to be getting the Blu Ray treatment thanks to Shout! Factory. As you may or may not know, Never Too Young To Die (1986) has only ever gotten a VHS and Laserdisc release here in the U.S., I'm talking a full 30 years ago. In that 3 decade span, there has never been an official DVD release of this Bad Movie Night masterpiece. So for filmgeeks like us, this is a huge fucking deal.

If you follow my blog, then you know I'm pretty obsessed with this film. It's hands-down one of the best, most entertaining and badass WTF?/Bad Movie Night films ever made. I can't even comprehend what the actual intentions were when they were making this film. It's literally insane, but in the best possible way. Like, this is the perfect film to gather your friends for, drink some beer, and have a howling good time at this. A good drinking game would be to take a big swig every time someone in the group says "What the fuck??". Because it will happen often. Trust me.

I have very fond memories of this film of my mom renting it for me at one of the local mom-and-pop video stores back in '86 or '87. And it took me decades to remember it and track it down again. It never popped up on my radar in all that time because home video was the only way to ever come across it. When I revisited it may years later (decades) as an adult, it literally blew my mind. It's like a crazy cross between James Bond, The Road Warrior, a high school teen film, and set in the glorious 1980's. It's so fucked up and amazing! Gene Simmons plays a hermaphrodite lounge-singing super villain named Velvet Von Ragnar who wants to poison the water supply to.............do something. I can't remember exactly because there's so much going on. Needless to say, the high school gymnast son (John Stamos) of a secret agent that just died decides to follow in his fathers footsteps to track down this super villain, and with the help of a sexy secret agent (Vanity), they intend to stop him/her. And folks, that's barely scratching the surface. This film rules so hard in so many ways because it's unintentionally hilarious and awesome at the same time.

No other details at this time other than a street date of April 11, 2017. I'll be happy if this is at least in widescreen. That would be such a drastically different experience for me out of all the times I've seen it. But some extras like interviews or behind the scenes stuff would be amazing. Stay tuned......