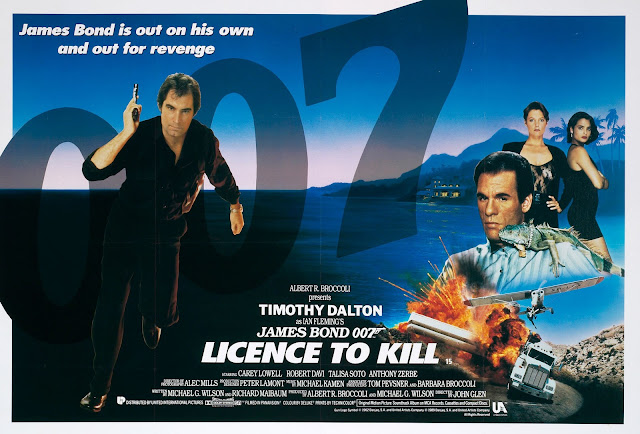 After having been completely enthralled by The Living Daylights, I was more than excited to dig into this one knowing that both star Timothy Dalton and director John Glen would be returning. The only thing that could make it even better was if Robert Davi was in it. Oh wait!! He IS in it, and he's the Bond villain! This just became amazing.

I don't think I have ever been as excited going into a Bond film as I was with this one. Right off the bat, there is automatically so much to love going into it. Dalton and Glen reteaming after their kickass previous film, Robert Davi coming on board as the Bond Villain, and a whole mess of notable faces filling out the cast, most notably, a very young and thin Benicio Del Toro as a bad guy, and Wayne Newton as televangelist. I still struggle to understand why he was even in this to begin with. If you've seen it, you'll understand why. This was also released in the summer of 1989, which was a fantastic year for film, but also, as you will read later, the films ultimate demise. 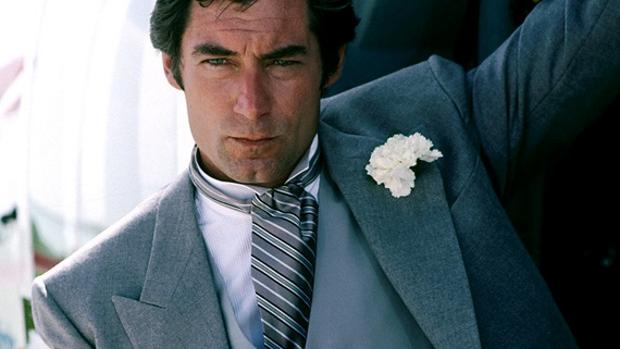 It's really hard to top The Living Daylights, so I guess I had that mentality going in. But I was still excited. It was impossible not to with the talent involved. License to Kill was good, but it wasn't great. In a weird way, a lot of it feels rushed. The film again retains the same dark, violent tone that the previous installment carried, but pushes the envelope even further. The violence is brutal and bloody, and the action while not nearly as prominent as you expect, at least until the third act, is pretty badass. The fight scenes, chases and shootouts are all pulled off effectively, but there's just no "wow" factor to them. The film's big action comes in the final act, and it involves a big rig. I'm kind of conflicted about this because while it was indeed awesome, it was also highly absurd and silly, with the big rig doing a bunch of unrealistic stunts that, while awesome, come off as cartoony, which kind of took me out of the experience a bit in that the film is a straight-forward hard-edged, bloody, serious and violent thriller, only to have cartoony action take center stage in the final act.

I think for me personally, the best thing about this installment is it's cast. Dalton again proves to be a pretty great 007, but it's Robert Davi as the villain that steals the show. He's so underrated as a badass. He's one of the hardest and consistently working actors out there, and whether he's playing a bad guy or a cop (his specialty!), he always gives the film a significant kick of quality. Around this time, Davi was smack in the middle of his busiest and most prominent featured roles. He had just come off of 2 supporting roles in Action Jackson and Die Hard the year before, and continued his streak with films like Peacemaker, Maniac Cop 2 and Predator 2 in 1990, and then delivering another standout villain in the HIGHLY underrated and completely enjoyable The Taking of Beverly Hills in '91. The guy is prolific, and always delivers the goods. He always seems to pop up in some of my favorite DTV action films, one of them being an obscure little gem I discovered last year called No Contest, which is pretty much a paint-by-numbers remake of Die Hard, only with a female heroin, and with Davi playing the role of Sgt. Al Powell. It's so great and if you love low-budget action done well, track it down. 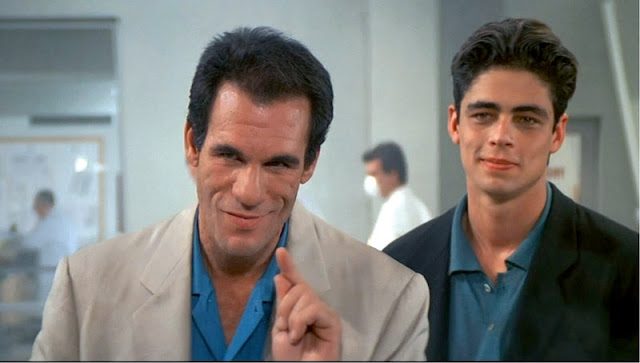 One of the amusing aspects of the casting was seeing the other Special Agent Johnson from Die Hard also have a supporting role in this film, character actor Grand L. Bush. Carey Lowell was hot as a Bond babe, and seeing Del Toro was a hoot, but the one I really can't wrap my head around is Wayne Newton's small "blink and you'll miss it" cameo in the third act. For some reason this bit of casting always stuck with me when I would come across this on tv back in the 90's. I never actually watched the film back then, but seeing him randomly in scenes always gave me the impression that he was the villain in this, since he played the villain in The Adventures of Ford Fairlaine just a year later. So it was a big surprise to find out that he had nothing but a less than 2 minute cameo in the entire thing. 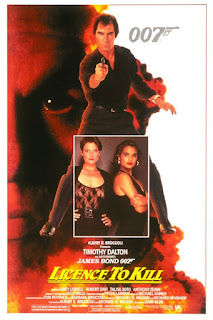 License to Kill had a lot of good going for it, only to be saddled by a release date that would ultimately prove to be it's doom. I'm talking about the summer of 1989, or as it's often referred to as the "First Summer of the Blockbusters". With summer releases like Tim Burton's Batman, Ghostbusters II, Lethal Weapon 2, and Indiana Jones and the Last Crusade, this little action film just didn't stand a chance, resulting in Dalton's exit from the role of 007, and putting the brakes on the James Bond franchise for the next 6 years.

I really enjoyed this one a lot. It's not as strong as The Living Daylights, but still a helluva lot better than a lot of the later Roger Moore films. I think these 2 Dalton films get unfairly overlooked, because he wrongly gets associated with bringing the franchise to a screeching halt, which just isn't true. If anything, he reinvigorated the franchise with his tough, physical and serious portrayal of Bond, only to be poorly judged for it. As I continue to dig through the exhausting franchise, I've discovered that the team-up of director John Glen and star Timothy Dalton gave us 2 of the best James Bond films in the entire franchise.

Posted by robotGEEK at 9:05 AM