Documentary Dynamite: Behind the Mask: The Batman Dead End Story

Documentary Dynamite is a new series I will be putting some focus on in the future on this website. I've only just realized that we watch a lot of documentaries, most related to films and movies, but rarely do I ever discuss or spotlight them, so this will be a new and regular series (maybe weekly?) on robotGEEK'S Cult Cinema. 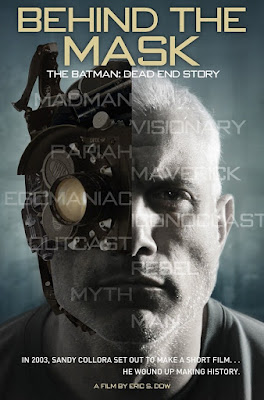 I had actually never heard of this documentary until I stumbled upon it while browsing on Hulu Plus recently. I had just finished the TMNT doc, Turtle Power, when Hulu suggested this as something I would also be interested in. And they were right. Much like most of you I nearly lost my shit when I saw the short film Batman: Dead End for the very first time years ago. It was such an adrenaline rush of awesome in something that was just a few short minutes long. Here was the very first (and only!) time I saw a real spot-on interpretation of Batman. No padded suit. No weird character design that looked nothing like Batman from the comics. This was as if Batman had literally jumped off the pages. The guy who played him was such an inspired choice because he literally wore tights, and pulled it off amazingly well. Every inch of the Batman costume design was flawless. And oh yea, seeing Predator and a Xenomorph battle it out with him was also cool.

Little did I know there was a story behind that remarkable little short film. And that story revolves around a guy by the name of Sandy Collora, an effects artist and commercial director who set out to put his stamp in the film world in hopes of landing a real directing gig. This would be his calling card if you will, and if all worked according to plan, he would move onto bigger and better things.

This was a really interesting and engaging documentary. In fact, it was pretty amazing. The fact that they were able to spread it out to a full hour and a half running time shows you just how much material they had to work with. And trust me, there's a lot. This documentary exhaustively details every little aspect of getting that short film made, from it's inception all the way to it's thunderous reception at Comic Con and the years that followed, including it's endlessly bootlegged legacy.

This doc digs so far deep into so may areas that I'm surprised they were able to fit it all into just an hour and a half, but that's the power of good editing. Writer/Director Eric Dow not only gives you insight into the entire production of that monumental short film, but also of the guy responsible for it, Sandy Collora, who quite frankly, is a character all on his own.

Most people thought Dead End would skyrocket his career, but it didn't. In fact, it did the exact opposite. Why you ask? Well, there are several reasons, but the most important being Sandy Collora himself. One could call him arrogant, and a tyrant, and they wouldn't be wrong. The guy admits it himself. There's definitely an "I'm the boss" mentality to his attitude, and he fully admits that his arrogance is probably what prevented him from moving up in Hollywood. He states that while he was working for a short time at Stan Winston Studios, he witnessed James Cameron on set of  The Abyss, and he saw his work ethic, how he demanded everyone's attention and respect, and he basically ran his production with an iron fist, and was completely blown away and captivated by that idea. James Cameron was in charge and he admired that idea. So when it came time to do his short film, he adopted a lot of Cameron's sensibilities behind the camera, as well as off the set, and well, he quickly developed a reputation as being difficult and somewhat of a tyrant. He acknowledges this, as do his coworkers and friends, and admittedly regrets a lot of it. I will say this. The guy is extremely confident, and that rubs a lot of people the wrong way, and comes off as cocky and arrogant. When his close friends admit this much, well that says a lot about his character.

There is so much information to this documentary that it's impossible to fit it all in in this post. Like, did you know Sly Stallone was actually in talks to star as Batman? He was literally having lengthy conversations with Sandy Collora about it and even said YES at one point, only to literally back out in the last second. It's things like that that make this documentary so engaging. There's so much to the story we don't know and so much revealed that kind of leave you floored.

Collora never could break free from the stigma he created for himself. When no projects ever materialized, he decided to write and direct his own and first feature film called Hunter Prey in 2010, 6 years after Dead End. It was this very documentary that actually convinced me to finally see it, as I'd come across it before but never jumped the gun on it, which I will dig deeper into with it's own review soon. He did end up making another Batman short film called Worlds Finest the following year after Dead End. This time he went a little lighter and bigger, pairing Batman with Superman as they battle Lex Luthor. It was okay. It never floored me the way Dead End did, and it didn't seem to be put together very well in terms of story and editing. It's lacking.....something. I just can't put my finger on it. I guess I'm not the only one since it never got the same recognition and fame that Dead End received. It's never regarded as one of the best, the way his first one is.

Much like a lot of you too, the first several times viewing Batman: Dead End was on a badly bootlegged DVD. It wasn't until years later that it started popping up on the internet more frequently, and in much better digital quality. Today it's regarded as one of the first fan-films that really took that fan-film concept to the mainstream, and showed people what you could do with some vision, creativity and passion.

Update:
It seems that this has been taken off Hulu Plus since the last time I checked. However, you can still stream it on Amazon.

Behind the Mask: The Batman Dead End Story is currently available to stream on Hulu Plus and Amazon.
Posted by robotGEEK at 10:21 AM