Return of the Living Dead Documentary Release Date and Info!!

Official press release:
"It worked in the movie!" When an army drum is breached and a mysterious chemical gas is released into a nearby cemetery, the dead return to life with only one thing on their minds...brains! The zombie menace quickly descends upon a group of misfits who must fight for survival as they are picked off one at a time by a horde of the undead. "Do you ever wonder about all the different ways of dying?" 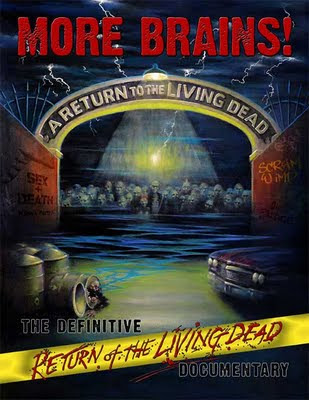 Dan O'Bannon's outrageous splatter classic The Return of the Living Dead has continued to terrify and entertain horror fans for over twenty-five years with its delicious mix of blood, guts, sex and punk. Boasting off-beat humor, plenty of attitude and one of the most famous zombies ever committed to celluloid, it's easy to see why the film's legacy continues to grow. "It makes the pain go away..." More Brains! A Return to the Living Dead is the ultimate account of the tongue-in-cheek, stylish and apocalyptic zombie movie. It features -- for the first time ever! -- contributions from all the main cast as well as clips, photographs, storyboards, conceptual art, publicity materials, archival documents and behind-the-scenes footage. "They're back from the grave and ready to party!" Through this definitive retrospective fans are finally able to explore the film's journey from the world of Night of the Living Dead to the mind of acclaimed writer/director Dan O'Bannon.
Narrator Brian Peck ("Scuz") guides you through the blood, sweat and tears as cast and crew look back on their experience in the graveyard creating the film that's been called "a beauty of a cult classic!"
Bonus Features: Never-before-seen deleted, behind-the-scenes, blooper and special effects test footage that brought the Dead to life, 2-hours of incredible bonus features including "A Conversation with Dan O'Bannon: The Final Interview, They Won't Stay Dead: A Look at Return of the Living Dead Part 2, Love Beyond the Grave: A Look at Return of the Living Dead, Stacey Q Live! Exclusive "Tonight" Music Video, Even More Brains: Deleted Documentary Interviews, Return of the Living Dead in 3 Minutes, and more! Limited edition premium collectible O-sleeve packaging featuring artwork created by original Return of the Living Dead poster artist Carl Ramsey!
The release date has been set for October 18, 2011
Special thanks to Eat the deaD for the update!
October can't come soon enough.
Posted by robotGEEK at 6:57 PM