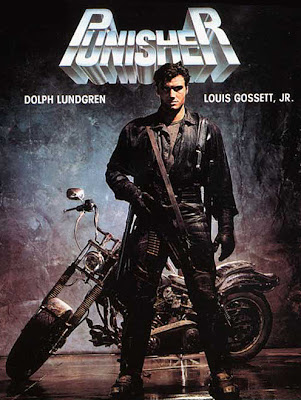 Dolph Lundgren plays Frank Castle, a cop who's family has been mistakenly murdered by the mafia as a result of growing mob violence in the city. Believed to have been killed in the same accident, Frank disappears underground and goes vigilante as The Punisher hell bent on revenge and putting an end to mob violence as a one man killing machine. If society won't punish the guilty, he will. Meanwhile, the Japanese Mafia has moved into town led by the ruthless Lady Tanaka. After failing to secure the Italian Mob as her cohorts she decides to kidnap the children of all the mob bosses in an effort to get them to give her control of there operation. After being the only one who didn't go to a meeting set up by Lady Tanaka that instead became an ambush where all the mob heads were murdered, head mob boss Gianni Franco forcibly enlists the help of The Punisher in rescuing the children, most importantly his own son, who will ultimately become the head mob boss one day, by kidnapping and threatening to murder Frank Castle's old partner Jake (Gossett Jr.) if he doesn't succeed. The Punisher agrees as he uses his own children's death as a reminder of why he does what he does and knows that the children are innocent victims in all of this and to ensure nothing happens to his old friend and partner Jake. Can The Punisher successfully rescue all the children and will Franco keep his end of the deal when it's all over?

After 3 attempts, to me this will always be the definitive Punisher movie. Sure, the film's not perfect and I do have problems with some aspects of it, mainly not having the standard punisher costume from the comics (remember, this was 1989, they hadn't started severely altering comics outfits for films too much by then). I still don't understand why they didn't at least include a skull like on a t-shirt or something.
But if you take the Punisher comic book character aspect out of it, this is a seriously violent and awesome piece of badass cinema. I mean, the action is relentless. As I sat down to watch this today, I tried to keep a body count, but right up to the halfway mark I lost track at number 65 and I can tell you that after that halfway mark there were many, many more bodies to be added. So I can tell you that it's at least a 100. Now that is my kind of action film.

As a Dolph Lundgren fan, this along with other films from around this period in his career like Showdown in Little Tokyo, Army of One and I Come in Peace rank among some of my favorite Dolph films. I think he was perfect in this, even with the ridiculous painted-on 5 o'clock shadow. I've always thought that he looked most different in this than in most of his films, a lot thinner and less muscular. After reading the linear notes my suspicions were confirmed. He purposely dropped to 200 pounds to match his weight when he was competing professionally as a fighter. But the guy is still big and physically imposing. I also love how he's such a sarcastic son of a bitch. For example, there's a scene where he's captured and strapped to a table where his limbs are tied to chains at each end and where he will ultimately be stretched to death by the push of a button. As the villain of the film, Lady Tanaka, is leaving and as he's facing certain death, he tells her "Hava a nice day" while she's walking out the door. Gotta love it.


If society won't punish the guilty, he will.
I've been collecting comics on and off since the mid 1980's, and right from the start of my hobby The Punisher was my very first "favorite" comic book character. He always has been and probably always will be. There's just something about a vigilante character that I'm instantly drawn to. I still have some of the very first Punisher comics that I ever collected like Return To Big Nothing, the very first issues of The Punisher War Journal by Jim Lee and even the Punisher magazine.
So of course when I heard they were making a live action Punisher film way back in 1989, well you can imagine my excitement. Except my excitement turned to frustration after seeing images of Dolph as The Punisher start to trickle out of entertainment magazines and he resembled nothing like the comic book character I so dearly loved. Then, as if that wasn't bad enough, we never got a theatrical release of the film here in the United States since New World Pictures went bankrupt and it would be at least another year before it hit VHS. But I always remember hearing that the reason we never got a theatrical release was because it was too violent.

The Punisher has such an interesting amount of talent in front of and behind the camera compared to the other low budget films Marvel was trying to make around this time, most notably the never released Fantastic Four movie and Captain America. Fist off, you have the awesome Dolph Lundgren, but you've also got Louis Gossett Jr. who doesn't even have to try to be as naturally talented as he is. The guy could do this in his sleep. Directing The Punisher, you have film editor Mark Goldblatt who was making his second go at feature film directing after the insanely awesome Dead Heat from the previous year. For the writing duties, you have Hollywood writer/director Boaz Yakin making his feature film debut also. Producing The Punisher is Robert Mark Kamen who has written a lot of big budget Hollywood films like the Karate Kid trilogy, Gladiator and Lethal Weapon 3 as well as teaming with Luc Besson on a lot of films like The Fifth Element, The Transporter films, Taken and Kiss of the Dragon. A ton of talent involved in this film to say the least.

A lot of people give this film a lot of shit and I still don't know why. I'm sure it's just the fact that he simply doesn't look like The Punisher and his right hand man Chip was nowhere to be found, but man, if you can just look past that part of it, this movie kicks some serious ass. Yes, it's low-budget, but not drastically like the other Marvel properties mentioned previously. In fact, the budget looks so much bigger than "most" of Dolph Lundgren's films these days.

Looking back on it now I've found so many new things to appreciate about it. I've always loved this film, right from my first viewing, but watching it again has brought more things to my attention. Like the awesome opening credits sequence. I never noticed before how it looks just like something out of a 70's detective thriller or Euro-Trash film, right down to the score. Unfortunately the score never sounds as awesome in the rest of the film as it does during that opening credit sequence, but that's a minor complaint because the performances, action set pieces and absolute carnage that fills the film makes this one of my favorite action films of all time. I mean, how many films can claim a body count that easily tops 100?

I've always had suspicions that there was an alternate cut of this film out somewhere in the world. I mean, obviously since on the back of the VHS and DVD release there's an image of Dolph as Frank Castle before he becomes The Punisher. He's standing on a street wearing plain clothes with his partner Jake (Gossett Jr.) and Sam (Everhard) dressed as a prostitute. That scene is not in any available version of The Punisher in the U.S. But I never put much thought or effort into finding this version until recently. Apparently there is a "workprint" version of the film with a few deleted scenes floating around out there and I will be doing a review on this "workprint" edition soon.

As far as action films go, The Punisher packs a serious punch. Yea, there are some problems with it, but it still kicks ass and though there are aspects of all 3 incarnations of The Punisher that I like, so far I like this version of the character the most overall. The insane amount of action and carnage, Dolph Lundgren at his best and director Mark Goldblatt not being one to shy away from gore and violence, The Punisher is one serious piece of Exploitation and Badass Cinema.
Posted by robotGEEK at 4:38 PM