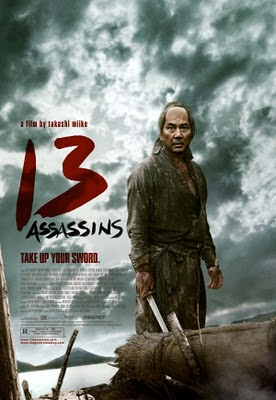 I'm still trying to wrap my brain around the fact that Takashi Miike directed this. I've been following the guy for about 10 years now and while I haven't seen "everything" he's ever done (there are just too many to keep up), I have seen a good chunk of them. While I do have some favorites like Ichi the Killer and Fudoh: The New Generation, a lot of his stuff is just too fucked up to get into. Like, I enjoyed the Dead or Alive trilogy to an extent, but I still don't know what the hell it all meant. But he has made some great films in almost every genre you can think of as he's probably one of the most prolific filmmakers ever. I think his most proficient year was 2002 where he directed 8 films that year alone. I wish I could say all of his films are great, but the fact is that he's made a lot of crap too.

Which surprises the hell out of me that the same guy who made countless upon countless films of that caliber turned out easily one of the best samurai epics ever made. The skill that went into making this is truly something to behold. I mean, right from the opening shot you know your not going to be getting your standard Miike fare. Every shot is epic in it's beauty and simplicity. No quick edit or hyper-kinetic camera work here, just good old fashioned filmmaking at it's finest.

With 13 Assassins it seems Takashi Miike set out to show the world, especially his biggest haters, that he does in fact possess the skill to direct a big sweeping epic without buckets of blood or gore, but can still keep the violence level high and realistic without turning a lot of people off. 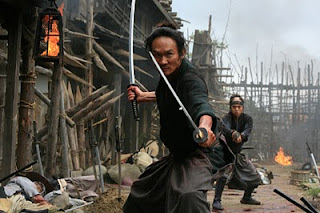 I'm not going to say that the film is perfect, because it's not, but it's pretty badass and highly effective in the type of story it's trying to portray and easily ranks as one of the most violent and exhilarating samurai films of all time.

Pretty much everything I'd heard about it is true. Slow first half where it's building the story and backgrounds of who will ultimately become the 13 Assassins and why they are on the mission they have chosen, and violent and brutal second half where, just as most of the reviews agree, is pretty much one big 45 minute long battle sequence. As long and as violent as this last half of the film is, for a Takashi Miike film it's surprisingly restrained. Some of the stuff happens just off camera, or the victims are turned the opposite way so you don't actually see them getting sliced and diced until they turn around after the fact to face the camera. But it all works so damn well with Miike's impressive visuals, the outstanding cast and muted bleached out colors of the film.
Speaking of the cast, it's a pretty damn impressive cast. Every actor in here delivers the goods ten fold and the casting of these characters is nothing short of brilliant, especially the main guy Koji Yakusho, who plays Shinzaemon, who spearheads the recruiting of the assassins. The guy is just awesome in this. Aged with wisdom and experience, but ruthlessly brutal when he draws his sword.
I really liked how the assassins were a mixed group of young and old. To me, the older guys were the ones that I enjoyed watching the most. Yea, they were older and all, but they definitely weren't any slower. Shinzaemon had a right hand man in the group, a guy even older than him who was so much fun to watch on the battle field. I had such a blast with that guy. He wasn't scared of shit and could single-handedly take down an entire fleet of samurai and ronin in the span of 10 seconds. Simply awesome!

As far as story goes, it's pretty basic. Evil lord needs to be assassinated or else he'll destroy the country and plunge it into war. And we're given a lot of back story in the first half of the film as to how Shinzaemon figures into the equation and what motivates him to give his life to end that of the evil lords. And as most people complain, the first half does drag on for a while, only offering a quick fight here and there to liven things up. It's only when the film hits the halfway point that things pick up and when they do, all hell breaks loose in an impossibly long battle that surprised even me at how long it went on. But that's a good thing. An endless samurai battle is always fun to watch.

Miike also throws in a few "WTF?" sequences here and there, just to add that special Miike flavor. Like a scene where as the enemy arrives into town as the assassins are lying in wait, they unleash a horde of cows on them that are on fire. Yea, the cows are on fire as they are running right at the enemy who are scared shitless at the sight. Another is when one of the assassins and one of the enemy are fighting as a bomb explodes that's strapped to the chest of one of them. A nice shower of blood soon follows. Great stuff!

My buddy over at A Hero Never Dies did a very nice write up on the International Blu ray release of this film, you can check that review out here. As far as samurai films go, this is definitely one of the best. Violent, brooding, bloody and epic in it's scope, 13 Assassins might go down as director Takashi Miike's most main stream and majestic film to date. After another viewing or two, I might even rank this up there with my favorite all time samurai film to date, Sword of Doom. But it's not there yet.
Posted by robotGEEK at 6:10 PM