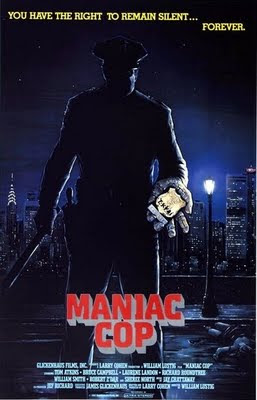 I probably haven't seen this one in at least 15 years or so, so I wasn't sure what to expect in terms of quality. My memories have a funny habit of playing  tricks on me. What I remember being really badass when I was a teenager usually doesn't ring true anymore when I sit down to watch something again all these years later. Such was the case with Eliminators and The Borrower, 2 films I remember really liking back in my teen's but looking on them with more mature and fresh eyes, I think are terrible. Go figure.

Maniac Cop still holds up surprisingly well 23 years later. Sure it's a product of it's time and looks low-budget, but it doesn't make it any less entertaining and with director William Lustig at the helm as well as a pretty outstanding supporting cast, Maniac Cop has every right to be considered a cult classic.

I would probably even classify this under Trash Cinema because it has all the necessary ingredients for that kind of film and in the end, gleefully embraces how ridiculous and over the top it all is and just has fun with it. Don't try to make sense of any of the inconsistencies or massive plot holes because it would take forever and drive you nuts. Instead go into this knowing what film it's trying to be and just have fun with it.

A series of seemingly random killings has left the city of New York on edge. Detective Frank McCrae is convinced that it's by one of there own either currently or retired but can't seem to convince anybody else of this theory, much less his captain. After a rookie cop is framed for the murders, McCrae slowly starts to uncover the missing piece of the puzzle that ultimately rings his theory true. Can McCrae and the rookie cop framed for the murders uncover who's really behind the murders before he kills again?

This is the kind of film that I wish William Lustig had made with Vigilante. That one had the right look and feel, but in the end it was really underwhelming and never took advantage of all the things it had going for it that could have made it more like something like this. Fortunately Maniac Cop seems to take all the missed opportunities from that film and pushes them even further in this one for a really entertaining experience. What really helps this film more than anything is it's stellar cast. For one you have the awesome Robert Z'Dar as Matt Cordell/Maniac Cop. But you also have cult film favorite Tom Atkins as detective Frank McCrae who's hot on the trail of the maniac cop, Bruce Campbell (never looking more fit) as the wrongfully accused rookie cop who's been framed for all of the maniac cops murders, Richard "Shaft" Roundtree as the Commissioner and what the hell, you even have boxing legend Jake "Raging Bull" LaMotta in a cameo as a security guard and Sam Raimi as a television reporter. A truly great cast all around.

Maniac Cop is not without it's flaws, but for the most part everything works really well. It's violent, bloody and impressively shot by Lustig. It fortunately retains it's visual flair for the entirety of the film offering some really impressive camera work and stunt sequences. The makeup may not be the best, but again it's a low-budget film, so you kinda have to guess that going in. The good thing though is that the maniac cop is not fully revealed until the very end, which is a good thing as his makeup is the least impressive thing about this film. I have to say that it was really cool seeing Campbell play kind of the hero in the tough cop role. I'm just so used to seeing him as a smart ass in most of his films and here he's given the opportunity to play the straight guy, a rookie who's been framed for multiple murders including that of his wife, who must prove that someone else is responsible in order to clear his name.


You have the right to remain silent..........forever.
Warning: Spoilers!!
One of the things that I didn't remember about this was the fact that maniac cop had someone pulling his strings. I just remembered, incorrectly, that he was just some dead cop who came back to life and was out for revenge against the people who had wronged him. But when he's out murdering people he's not targeting the ones that led to his death, instead killing unlucky random citizens he just seems to come across at night. But there's more to it than that as we soon realize that he's getting information on certain people connected to the police force by someone in the department and using it to his advantage. So right away I start to think, "how can a zombie cop think?". Maybe he does the cop stuff out of memory and habit since he was a decorated veteran cop for so many years, but how is he able to think and process information to use to his advantage? So my memories were incorrect and he is not in fact dead after all. At least not yet anyway. Because I do remember him pretty much being a zombie in part 2, but I guess that process hadn't taken effect yet in the first one.
In case you were wondering, Matt Cordell was a decorated cop who was unjustly sent to prison for killing someone on the job. Refusing to be separated from the other inmates (he did put most of them in there after all), he is ambushed in the shower by a bunch of fellow inmates and murdered......seemingly. When he's taken to the coroners office the coroner discovers that Cordell is not dead after all, but just barely clinging to life. The coroner instead states that he was in fact deceased and justifies it by stating that he felt nobody could live anyway after what Cordell had been through and he was pretty much brain dead and his pulse wasn't strong enough to sustain life. It's never really stated what happened to Cordell's body after that though. Did the coroner in fact bury him? Or did he somehow let him go? Another major plot hole that drove me nuts. As I said, the many plot holes and loose ends will drive you crazy. I wish there was some explanation as to why this guy is 1.) Alive. 2.) Able to have super human strength. 3.) Going around killing random people instead of the ones who "wronged" him. All that shit just didn't make any sense to me. We're just supposed to accept it I guess and move on. End Spoilers.
Robert Z'Dar being cast as the maniac cop was simply a brilliant move. The guy's made a name for himself as a regular B-movie baddie, but he has popped up in a big budget film from time to time, most notably as the truck driver in the beginning of Tango & Cash (a badass 80's actioner that I reviewed previously here) who showed up again later in the prison escape sequence. Maniac Cop doesn't utter a single word in all three films, instead using body language and action, and with Z'Dar's naturally big size he comes across as physically imposing and threatening. And that jaw. Who wouldn't be scared of that jaw? 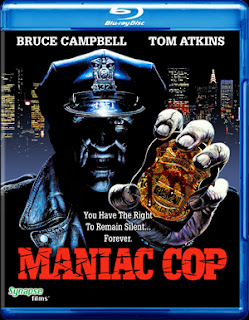 Maniac Cop is finally getting the Blu-ray treatment on October 11th of this year by Synapse Films with a decent amount of extras. Most of the film takes place at night, but as much as I enjoyed watching this on my Collector's Edition Widescreen VHS, a lot of it was hard to make out in the night scenes which looked dull and muted, and unfortunately most of this film takes place at night. So watching this on Blu-ray when it comes out would definitely be an upgrade in terms of picture quality and a must buy.
Interestingly Maniac Cop 3 (the least favorite of the bunch) is easily and readily available on DVD very cheap. Part 2 was only ever released on a lazy bare bones Full Frame DVD, just like with the OOP DVD of Split Second. Plus, it's never been available in Widescreen, which is just odd and lame. Part 2 is easily the best of the series and deserves a proper release. Hopefully the success of the Blu-ray release of this film will encourage Synapse Films to also release part 2 in the near future. Only time will tell.
Posted by robotGEEK at 4:29 PM