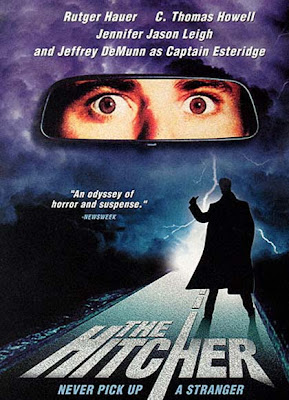 First time director Robert Harmon makes his feature film debut here with The Hitcher and packs this thing with so much style and substance that, along with Rutger Hauer's creepy performance, easily ranks as one of the best thrillers to ever come out of the 80's. The Hitcher has a lot of things going for it with so many different ingredients in the pot that makes it seriously stand out. The main ingredient? Rutger Hauer. If the guy didn't creep you out before, he certainly will after watching this. The guy is in full on "scares the shit out of you!" mode here and while he's played a lot of villains in his lustrous career, I don't recall ever seeing him play anybody as fucked up and pure evil as John Ryder. Sam Elliot had actually been hired to play the role of the hitchhiker but had to back out because of scheduling conflicts. Though I personally love the guy and think he could have done wonders with the role, thank gawd he backed out and Hauer took over cuz come on let's face it, Hauer was born to play the role and after appearing in well over 100 films, this is easily one of his most identifiable roles.

But it's not just Hauer that makes The Hitcher work. You also have superb direction by former photographer and director of photography Robert Harmon and a taut, tense and supremely suspenseful script by Eric Red who also wrote Near Dark, Blue Steel and Body Parts. Throw in a "then" popular C. Thomas Howell and you have a match made in heaven in 80's cinema.

I had actually been wanting to see this one for a really long time. I remember it being one of my favorite films from that era but at the time, was never able to find it in Widescreen. There are some films that I just cannot watch unless they are in Widescreen, no matter how much I love them. I know I can be a snob when it comes to that kind of stuff, but that's me. But anyway, I do remember searching and searching often throughout the years but from what I could find, the bare bones HBO DVD release was always in Full Frame, as was the Laserdisc and subsequent VHS releases and was never able to find it in Widescreen. Long story short, I was wrong and apparently it's been available in it's proper 2:35:1 aspect ratio for quite some time on both DVD and VHS. What a serious waste of several years of my life looking and waiting for this kind of release. I must not have been looking hard enough. Anyway. 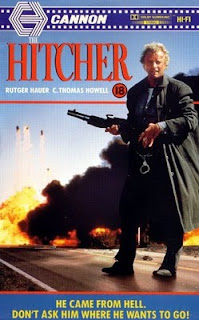 But this is one of those films while being very dark and suspenseful, I also remember being visually stunning. Robert Harmon (making his directing debut) blew me away with his visuals here. It's a fairly simple story and with anybody else at the helm, I doubt they would have given the film as much panache as Harmon does here for this type of film. 25 years later I'm still blown away at how beautiful it all looks.  Harmon takes full advantage of the Widescreen format and I just couldn't imagine watching it any other way. To this day, while the talk is always about Rutger Hauer's perfomance is scary as hell, I'm still surprised nobody ever mentions how stylish the film is.

Besides Hauer's performance, one of the main things I love about this film is that it doesn't waste any time getting to the point. We're not set up with a long and drawn out prologue about who Jim Halsey (C. Thomas Howell) is or why he's driving out in the middle of nowhere. You kind of figure it out immediately and it's after his first conversation with John Ryder (Rutger Hauer), the hitchhiker he just picked up, that it's confirmed that he's driving a car from Chicago to California for a company.  Right off the bat the hitchhiker tells him that he just killed the previous guy who gave him a ride by cutting off his arms, legs and head and he was going to do the same to him, unless he stopped him. And that's a constant theme found throughout. John Ryder tells him on several occasions that he will stop, if Halsey will stop him. He wants to stop doing the things he does, but nobody has ever been able to stop him. And while he's given clearly at least a dozen instances where he could easily have killed Halsey, he doesn't. Instead everything he does from the beginning on is to ensure that Halsey is free and able to keep moving and hopefully stop him. It's like he sees something in Halsey that he hadn't found before. Like Maybe this is the one guy smart enough to finally put me down. Halsey is even arrested several times in the film and every time Ryder bails him out by killing every single person that get's between him and Halsey. It's amazing really how efficient Ryder is at killing. He does it so easily and seems to be unstoppable. It doesn't matter if it's an unsuspecting family or a horde of cops, he always comes out in the end the victor and able to move on with his obsession with terrorizing this young man.

You also start to wonder who Ryder "really" is. You don't know anything about him or why he's doing what he's doing. Halsey even asks him point blank on 2 occasions "why are you doing this to me?".  Ryder never gives a clear answer, only saying once that "you're a smart kid.......you'll figure it out." But nothing is ever revealed as to the "who" or "why". You begin to wonder if Ryder even actually exists and is maybe some part of Halsey's split personality and Ryder is his alter ego because some of the things Ryder does seem unnatural, like he's a ghost. He always seems to magically appear wherever Halsey is (hotel rooms, coffee shops, jail, gas stations, etc.) and though there are dozens of murdered bodies lying all over the desert road at the hands of Ryder and the fact that there are hundreds of cops on his trail, he's never caught. Even when he's captured at the end we're given nothing about him. The cops can find no name, I.D., birth certificate and nothing comes up from his prints. It's only then that Halsey remembers him telling him his name is John Ryder when he first picks him up in the very beginning. But again, even after being caught and arrested he's still miraculously able to escape from a bus during transport with a dozen armed cops eyeballing his every move. Another reason to suspect the reality of it. But whatever, it's a fun guessing game and with Hauer in full on creep-mode you're kinda mesmerized at how purely evil this guy is and don't really stop to think about any of that stuff. In the end, we're never given a clear or definite answer anyway. Speaking of Hauer in full on creep-mode, that sequence with Jennifer Jason Leigh being tied between a big rig and the trailer it's pulling with Ryder at the wheel still blows my mind.

Having not seen this for for almost 20 years, I gladly say that I was still completely blown away by this. From it's visual brilliance to the top notch performances, no bullshit setup, taut fist-clenching induced suspense and tight structure, The Hitcher easily ranks as one of the best suspense thrillers I've ever seen. You owe it to yourself to seek out the Widescreen transfer of this film. The film was painstakingly designed and shot intentionally that way and it's really the only way to see it.
Posted by robotGEEK at 8:26 PM