Review: The House of the Devil 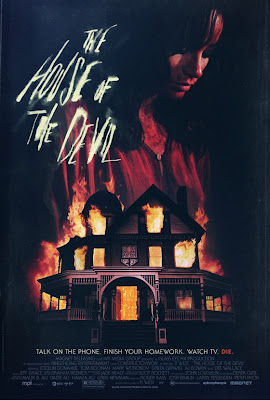 The main thing that Ti West's The House of the Devil will probably mostly be known for is it's amazing ability to look and feel like an authentic horror film from the late 70's or early 80's. From a technical level, the film simply looks stunning as it's apparent that every single frame has been painstakingly designed and executed to look like a film made from that era.

I really enjoyed this film, but that might be because unlike most film goers I notice all the little details that go into making a scene work and how well or poorly it's shot by the director, cinematographer and the director of photography. Most people don't think about that shit, but I do. Here it's obvious that they used the older 16mm format to shoot, which is just not used anymore. But it makes such a difference because it makes it look so old and authentic. Kudos to the team for going this route. Director Ti West should be commended in his use of old school filmmaking techniques to give us probably the most authentic homage to the kind of films like Rosemary's Baby, The Omen and even The Exorcist that were made and released often during the late 70's to early 80's.

Samantha is a struggling college student who's broke and needs money. Against the advice of her best friend she takes a babysitting job after seeing flyer's posted around campus. The job also seems to coincide with a lunar eclipse that has been big news. Unbeknownst to her the babysitting job falling on the lunar eclipse is no accident and she soon finds herself caught in a tale of survival against a satanic cult.


Warning! Major Spoilers Ahead:
The House of the Devil is a real slow burn kind of a film, so if you're short on patience, then this might not be your cup of tea. It takes it's time setting up the plot and developing the characters. But the film is so visually impressive with the camera work and all the little details like decor, costume design and set decoration that it gives the film a certain authenticity and keeps it from being just another low budget wannabe slasher film. And i'm not even sure that it qualifies as a slasher film since it ultimately becomes a film about a cult of Satan worshipers who need a victim on the night of the lunar eclipse for there Satanic ritual.
And that's one of the interesting things about this film, that it ends up being almost two different films. For the first 45 minutes or so it's very slow and drawn out as we're introduced to all the characters and are set up with the babysitting situation. Only once Samantha gets to the house for the job, she discovers that it's not a baby that she's babysitting but the elderly mother of the Mr. and Mrs. Ulman, played by the great Tom Noonan and Mary Waronov respectively. These two are great and in the case of Tom Noonan, just completely weird and creepy as hell. But once it's discovered at the end of the film that the Ulman's actually brought Samantha to the house to be sacrificed for there ritual, the film turns into a typical modern day "hand-held" camera horror film for about 15 minutes. Which I thought was kinda weird considering the entire 75% of the film prior to this sequence was so meticulously designed, shot and created and then once it get's to the big reveal it's all crazy hand-held camera action with a completely different kind of look and feel. Then after the shocking finale it goes back to it's Omen style of filmmaking.

The entire cast is pretty fantastic in this. Jocelin Donahue who plays Samantha is pretty natural in this. A levi's model by trade, she definitely has the acting chops to pull off a role like this. Writer/Director and actor Tom Noonan is just awesome as always, as is genre character actress Mary Waranov. We're even treated to a short scene with cult favorite Dee Wallace as a landlord.

I really enjoyed this one. It wasn't nearly as scary or gory as I had hoped, and i'm not sure that it would even qualify as a horror film as it seems to play out more like a suspense film or a psychological thriller; I think my expectations were just too high after all the good reviews I read about it. But visually it's such an impressive film with top notch acting, design and camera work. I'm still not sold on that whole ritual sequence at the end as I think the film would have been fine without the completely different filming technique they chose to use, but that's just me. Maybe most people liked it. Either way, it's a good film and certainly one worth checking out. I haven't seen anything else that Ti West has done, but he's definitely one to keep an eye on in the future.
Posted by robotGEEK at 9:49 PM