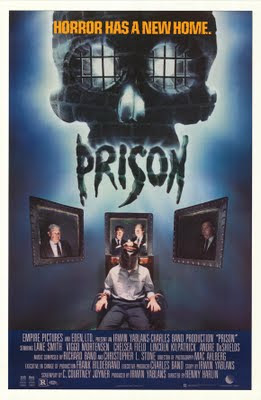 Prison is a pretty great little horror film. Released in 1988 and never having had an official U.S. DVD release as of this day, which shocks the hell out of me, it has everything you would want in a horror film and delivers ten fold.
Most people don't know that this film even exists in director Renny Harlin's filmography. This was his second decent budgeted film to be made after a few shorts and it's with this film that you see the Finland native really has a flare for this kinda stuff. I just can't believe that this film has never gotten a proper U.S. DVD release. I know it's available in a Region 2, but why not a stateside release?

Prison is a slow burn kind of film, and you're a little thrown off for the first half as not much really happens other than setting up the story and characters, and there are a lot of them. You start to think that it's gonna play out more like a ghost story or thriller or something. But right at the half way mark the shit hits the fan and it hits it hard. Prison has everything I love in a good horror film. It's stylishly directed, has really good character development, the best B-movie cast money can buy and top notch special and makeup effects. It also has plenty of "Oh Shit!" moments to satisfy a true horror fan and raises the level of this film to awesome.

Right in the beginning as the film starts were shown a guy get executed. You can tell that it's some time ago, maybe the 60's or 70's, and you never see the face of the guy getting strapped into the electric chair, but you do see one of the guards and it's a younger looking Lane Smith, who plays warden Eaton Sharpe. Jump forward about 20 years and the prison has been abandoned for what seems like years and has been recently reopened and former prison guard Eaton Sharpe has now been appointed warden of this new prison. As the new prison inmates start rolling in for the first day of roll call you see a lot of familiar faces and immediately know that this is gonna be better than you expected. Right away you have a very young Viggo Mortensen, Tiny Lister Jr., Chelsea Field, Lane Smith and a slew of other B-movie regulars which gives the film a definite aura of authenticity. Immediately warden Sharpe orders a few of the guards to knock down a wall that housed the original electric chair in the basement and once they do, they unwittingly unleash the spirit of the prisoner that was electrocuted (wrongly) all those years ago and is now out for revenge on the warden and everyone else in the prison. You soon learn that the spirit was a wrongfully electrocuted prisoner who was set up by warden Sharpe when he was a security guard.

When the spirit is released and starts killing both prisoners and guards off one by one, the film really starts to pick up it's pace. The deaths are gruesome and creative and really well executed by director Renny Harlin. They're aren't a lot of digital effects (thank gawd), instead the use of light substitutes the evil force to great effect. And when they do use some effects work, it still looks really great and not cheesy or lame in any way. But when the kills come in, they are awesome! Over the top, bloody, creative and fully realized in a practical way, which really raises the bar in terms of quality. Everything just looks great and I never once winced at how awful a certain death or sequence was executed. It's a low budget film, but looks and feels like some of the best horror films to come out of the 80's thanks to a "then" confident and talented director. This is the Renny Harlin I love and miss. The guy who gave us great looking pictures like Prison, A Nightmare on Elm Street 4, Die Hard 2, Cliffhanger and The Long Kiss Goodnight. Seriously, what happened to this guy?

Viggo Mortensen does a really great job as the quiet hero. He plays a thief who is in prison for a short stint, but has a heart of gold. He's a man of few words, but never hesitates to risk his life to help someone else out. Another factor that plays into the story later is that he bears a striking resemblance to the guy that got executed all those years ago, the vengeful spirit now currently haunting the prison. It's funny, this guy has been acting in minor roles for over 25 years but it wasn't until Peter Jackson cast him as Aragorn in The Lord of the Ring trilogy that people really took notice. The guy delivers the goods in everything he does, whether it's in films like this and The Texas Chainsaw Massacre 3 where he played Tex, or minor roles in films like Albino Alligator and Daylight, he gives everything into each role and makes them memorable. Lane Smith does the evil warden role really well here. The guy is such an asshole and constantly seems to come up with interesting ways to torture and punish the prisoners to get what he wants. Chelsea Field does a fine job as well, though I never understood what her position was. She works on the committee that got the prison up and running again and her job was basically to see if everything was running according to plan. She's one of the good guys and though she kinda disappears for the mid section of the film, she returns to play a pivotal role in the end.

If you can sit patiently through the first half of the film, your patience will be handsomely rewarded. This film delivers the goods on all fronts and while I was a little worried in the beginning with the "slow burn" feel, I'm happy to say that this rare, little seen and under-appreciated horror film exceeded all my expectations and turned out to be a really badass and extremely well made horror film with a lot of "Oh Shit!" moments. Because come on, if you're not yelling "Oh Shit!" at the television while you're watching a horror film, is it really any good then?
Posted by robotGEEK at 5:22 PM