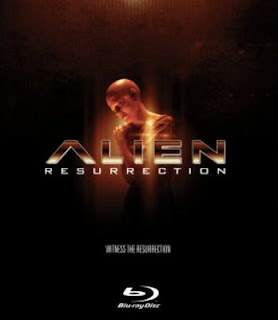 One of the things that I love about the Alien franchise is that each film offers something totally unique from the one before.
Alien was a horror film in space. Aliens was kind of a war film in space and went full on action. Alien3 went the complete opposite from the one before and went "no guns" and was a brooding post apocalyptic thriller almost entirely set in a prison with Ripley being the only female. Then with this entry, they went full blown Sci-fi and brought the film back to it's roots where the majority of the film took place on board a spaceship, as in Alien. But with Resurrection, director Jean-Pierre Jeunet (City of Lost Children) and writer Joss Whedon (Firefly, Buffy the Vampire Slayer) combined all the elements of what made the three previous films work and upped the anti. I really love this film. To me it represents the best of what a science fiction film should be. It's a visual marvel with top notch effects work to match. The script by Joss Whedon is so completely absurd , but such a blast when it's all put together so well by director Jeunet and the cast he's assembled.

The second I heard the Alien films were going to be released on Blu ray I was all over it. I already owned the fantastic DVD Quadrilogy set that came out a few years back, but who can pass up the chance to watch these films in glorious 1080p? After watching both versions of the film, I have to admit that I prefer the "special edition" version more. Jeunet does a little intro before the film stating that for the sole purpose of this boxed set and to offer something new he agreed to include these new scenes but felt that the version released in the theaters back in 1997 was in fact his "director's cut", the cut he liked most. With the special edition the biggest changes are that there is an alternate opening sequence and an alternate ending, both of which I prefer more than the theatrical version. In the opening sequence we see a great effects shot where you see giant teeth open and you think that it's the Alien, but as the camera pans back you realize it's a tiny bug the size of a fly which subsequently get's squashed by the pilot of the ship while the camera continues to pan back and the we see an enormous ship soaring through space, all in one take. A beautifully and well constructed effects shot that, to me, better sets up the tone of the film to come.
The ending is another big change. In the theatrical version after Ripley has destroyed her offspring the ship enters Earth's atmosphere and were shown through the reflection on the glass of the ship a beautiful planet with bright blue ocean water and big white clouds as Ripley and Call (Winona Ryder) are pondering what the future holds and we then roll to end credits. In the special edition we see the ship actually land on a catastrophic and devastated Earth. Ripley and Call get out and do pretty much the same monologue and after look out to a view of what appears to be Paris, France in total ruins. I don't know, for me the bleak ending worked better than the optimistic ending of the theatrical cut. I like how given all the shit the crew went through to get to this place called Earth they find that it doesn't look to be any better of a situation than what they just escaped from, as we roll to end credits. That's a pretty ballsy ending in my book and one I felt worked much better.

I honestly do not know why this film get's so much flack. Of course whenever anybody refers to an Alien film as being one of there favorite, they are usually referring to Ridley Scott's Alien (1979) or James Cameron's Aliens (1986). Nobody ever mentions David Fincher's failed attempt with Alien3 (a film that failed not at the fault of Fincher, but a film I deeply love anyway) or Resurrection. I understand people were still probably seething from the mess that was ultimately Alien3, but people, you need to give Resurrection another chance. It's what sci-fi cinema is all about. Great visuals. Great effects. Sigourney Weaver kicking all kinds of ass. Great, if not totally absurd, story. Great cast. You've got action, suspense, gore, thrills, and a relentless pace that never let's it slow down long enough for you to ever get a chance to glance at your watch.

Speaking of the cast, let me mention how badass this cast is. First off, you have Weaver who's clearly having a blast playing almost a caricature of herself and someone who know's she's not human and uses it to scare the shit out of people. She might even be a little psycho, but that's always a good thing. You've also got a collection of badass space pirates led by the gravely voiced Michael Wincott (The Crow) as well as the always reliable Ron Pearlman (Hellboy) as a big, nasty and violent ape of a man who chooses to let his fist do his talking, Winona Ryder who surprisingly blends in well with this kind of film, Dominique Pinon (a Jeunet regular), Gary Dourdan (CSI) playing a tough guy sporting some serious hardware under his sleeves, cult favorite Brad Dourif (Child's Play) playing a doctor who learns the hard way you don't fuck with an Alien, and Leland Orser (the guy who was forced to have sex with a prostitute while wearing a cock contraption with razors in Seven) who always impresses me in almost everything he does. This is a truly great cast all around and one that raises the bar as far as ensembles go.

David Cronenberg and Danny Boyle were originally approached to direct this installment before ultimately going to Jeunet and Caro who had made Delicatessen and The City of Lost Children together. Caro was uninterested in making a film from such a well known existing franchise however, but Jeunet jumped at the chance and I'm so glad he did. This was his first solo outing as a director after splitting with his longtime directing partner Marc Caro. After Resurrection Jeunet would later go on to direct other solo projects like Amelie, A Very Long Engagement and Micmacs; all stunningly beautiful films, but it was with this film that he proved he didn't "need" Caro to make a film. In Resurrection his visuals are simply breathtaking as breathtaking as they could possibly be in a claustrophobic, dark and murky spaceship setting. But somehow the man makes it work. The film simply looks stunning from a technical level with Jeunet's inventive camera work and Darius Khondji's cinematography.

As far as Joss Whedon's script goes, it's brilliantly insane. He's put so many over the top and outstanding moments in here that it's almost impossible to just name a few, but I'll try. Like the scene where Purvis (Orser) learns that he was kidnapped, bought and sold to the doctors to be impregnated by the facehuggers. Later in the film when he knows he's about to die as the Alien starts to burst through his chest he runs after the doctor who did that to him and even after being shot a shitload of times, grabs the doctors head and puts it to his chest knowing the Alien will burst through his chest and right through the doctor's skull. Classic. Or the weird and creepy moments with Ripley and the hybrid Alien that deems Ripley as it's mother and all the strange interactions between the two when they are together. Creepy stuff. Or that badass and completely edge-of-your-seat underwater sequence where the Aliens are chasing Ripley and the space pirates. Who knew Aliens could swim? This film's brilliantly insane with a shitload of "WTF?" and "Oh Shit!" moments.

I could go on an on and on as to why I think Alien:Resurrection is such a great piece of science fiction cinema, but it would take forever and I've got other shit to watch. The film has never looked better as it does on Blu-ray and I urge you to sit down and experience the "special edition" cut as opposed to the "theatrical cut". Big differences mainly with the opening and closing sequences but changes I felt made the film much better in terms of keeping with it's style, pace and structure. If you're looking for a science fiction film with tons of action, thrills, suspense and gore, you can't go wrong with Alien:Resurrection.
Posted by robotGEEK at 9:34 PM