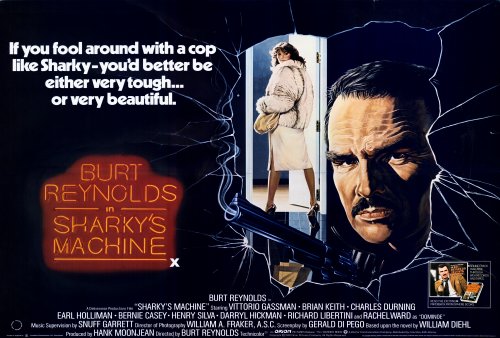 Sharky's Machine is a film I've been wanting to catch for a long time. I love me a good Burt Reynolds flick, and while this one has always been on the back of my mind, I've never had a chance to really come across it until now. Most Burt fans consider this his best film. For me it's still a toss-up between this and Stick. I know Stick didn't end up becoming the film that neither Burt nor the author had envisioned, but for me it's still one helluva badass Burt Reynolds flick where he plays cooler than cool and tough as nails all at the same time. That's the Burt I like to see. I know the guy became the biggest box office star at the time and made a shitload of money with films like The Cannonball Run and Smokey and the Bandit, but it's these hard-edged more serious films that I prefer when I'm needing a Burt fix.

Sharky's Machine starts off with a bang. Sharky, a narcotics cop, is in the middle of an undercover drug sting when it goes completely awry where several innocent civilians are killed or hurt. Sharky is able to eventually bring the guy down, but because of the whole botched operation he is quickly demoted to Vice. Once in Vice he teams up with a collection of Vice cops who mainly work on catching prostitutes and whatnot. Nothing too big until they discover a prostitution ring with ties to the mob and a local politician. Sharky zeroes in on one particular high dollar prostitute named Dominoe played by the enticing Rachel Ward. Dominoe, it seems, has ties to both the Italian Mob "and" the local politician who is running for governor, so Sharky feels staking out her place is a good place to start. Undoubtedly though, he starts to form a voyeuristic love for her as he watches her day and night from an adjacent building.
In the meantime there's a sadistic and psychopathic hitman out on the streets killing off anybody that might be able to connect the mob to the local politician under the employment of mob boss Victor Scorelli. 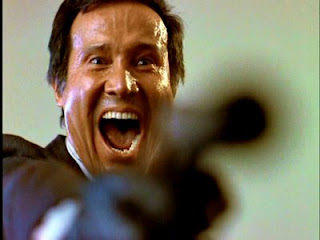 The hitman here is played by none other than Henry Silva and it's whenever he shows up on screen that the film really picks up speed. He's sadistic and extremely violent and completely psychotic as he's continuously high on PCP and Cocaine. The guy's almost like a ghost as he's able to move around and disappear before anybody knows what the hell happened. I love all the little touches given to this mysterious hitman that differentiate's him from your average run of the mill movie hitmen. Mainly the screaming he does when he's about to blow your head off. I don't know, it's definitely unique and strange but adds a certain amount of character to him that you don't normally see, especially in a movie from 1981. I don't know if it was in the book or if it was a creative decision by director Burt Reynolds, but it works.


If you mess with a cop like Sharky, you better be very tough.......or very beautiful.
I seriously loved this film. It's gritty and extremely hard-edged in the world of crime drama's and I was happy to see that Burt picked a genre and stuck with it from beginning to end, unlike the mess that was Gator, which didn't know what kind of film it wanted to be. Reynolds direction is solid and when the action and violence unfolds, it's pretty damn brutal and I loved that about this film. He didn't half ass the violence to please anyone, instead choosing to go full on gratuitous in it's depiction of violence whether it's a gun fight, a fist fight, or in one sequence against women where Sharky gets into it with Dominoe and ends up roughing her up a bit. I was kinda shocked at that scene because he did the same thing in Gator where he roughs up a girl and doesn't seem to mind looking like the kinda guy who can hit a girl.
The blues score is pretty impressive too, giving the film a lowdown dirty shame (not the Wayans film of the same name but the genre kind of film from that era in the late 70's) kinda feel. The opening credits theme song might not work so well though as it just seems out of place, but the rest of the blues score works great.
Reynolds has also surrounded himself with a tremendous cast of supporting actors. We've got Charles Durning as Sharky's high strung boss, Bernie Casey as his new Vice partner, Henry Silva as the psychotic hitman, Richard Libertini as an old friend on the force, and Brian Keith from Hardcastle and McCormick who plays another one of his Vice partners. A really, really great cast in a pretty great film.

My only complaint, and there are 2 of them, is that this is not available in Widescreen (a constant complaint of mine, I know), and the mid section of the film seriously drags when Sharky is staking out Dominoe's apartment as we watch her do days and days of mundane crap. I felt this section dragged on unnecessarily long and I caught myself losing interest once or twice. Thankfully the film redeems itself in the last act as all hell breaks loose and Sharky and his "machine" (his Vice Squad partners if you didn't already figure out what machine stood for) go up against the ruthless hitman. Somehow in this last section of the film Reynolds was even able to throw in a fight with himself and a bunch of ninjas. Don't ask me how, but he does and it was a pretty badass sequence.