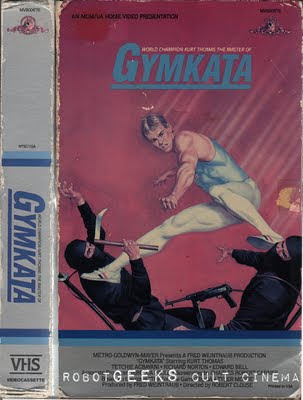 The skill of gymnastics, the kill of karate

First thing you should know when going into this is that it's directed by Robert Clouse, the dude who directed probably the best and most influential martial arts film of all time, Bruce Lee's Enter the Dragon. It also stars Olympic Gold medalist Kurt Thomas and if that's not enough, also stars regular Hong Kong baddie and martial artist Richard Norton.

So you're probably wondering, does it all work? Did the filmmakers invent some new hybrid of gymnastics and martial arts that had never been done before and miraculously knocked it out of the park that one time and no other filmmakers could ever top it so they never even tried?
I'm sorry to say that it doesn't. I wanted it to though, really really bad. The beginning is promising as the setup shows what kind of film this is going to be. The camp factor is really high and I'm pretty sure that it wasn't intentional. And I knew that going into this. But I had hoped that the cheese and camp factor were so ridiculous that it would fall into the "awfully good" category.

Synopsis via Max Halperin:
Jonathan Cabot is a champion gymnast. In the tiny, yet savage, country of Parmistan, there is a perfect site for a "star wars" site. In order for the U.S. to get this site, they must compete in the brutal "game". The government calls on Cabot, the son of a former operative, to win the game. Cabot must combine the gymnastic skills of the west with fighting secrets of the east and form GYMKATA!!

I know the concept sounds ridiculous, but I figured if they could somehow make gymnastics martial arts look good, then it at least had that going for it. Man, this thing is bad and not in a good way. It definitely has it's moments, but it tries so hard to be so serious and you can tell they were going for a martial arts James Bond kind of genre but it's missing so many elements that could have made it all work. For one you have director Robert Clouse who just does not seem to be trying at all here. Everything looks bland and while this was made in 1985, he seems to be using the same techniques that he incorporated into films like Enter The Dragon and Black Belt Jones, but a whole decade later just doesn't work. One of the most noticeable aspects are the sound effects. The punches, falls, kicks and swooshes sound like the came right outta some really bad Hong Kong film from the early 70's. You keep thinking to yourself as you watch it, "didn't they stop doing that stuff in these films in the 70's?".
Okay, so if the fight sequences were at least badass then I could forgive those sound effects. It would have added that little "something", but even the fight scenes were laughably bad. Maybe the first one or two times when Thomas is doing some completely unnecessary jumps, flips and tumbles during a fight it was amusing. But after the third time it gets tedious and repetitive. Nothing new or interesting to differentiate one from the other where you could actually point out from memory when talking to your friends about it. Like, "oh dude, remember that badass fight when he did this or that in the forest?". Nope, none of that here.

Surprisingly, Kurt Thomas does a decent enough of a job. He can deliver the lines without making you wince in pain and Richard Norton is always reliable as an able bad guy. Some of the supporting actors are not so lucky though. Bad acting and bad dubbing are all over the place. There is one awesome aspect of the film, the score by Alfi Kabiljo. It's way more cooler than it deserves to be for this film. It's a loud, stylish and bombastic score that reminded me of Basil Poledouris's work on Conan the Barbarian. I'm not kidding, it really did and it's probably that aspect that led me to believe this was going to be something pretty badass.

I have to say that for most of the film, it was alright. It started off pretty cool as you immediately see how ridiculous this film is going to be. Then it just gets kind of tedious for the mid section until just getting plain weird towards the end. It's right after he's completed most of the "Game" and has returned to the village. All of a sudden it tries to turn into a creepy supernatural kind of film complete with eerie music as he's walking through a seemingly empty town, but then starts to see a few towns people acting really weird and trying to kill him. These townsfolk are moaning and yelling and making really strange sounds and almost acting like monkeys. I just don't know what the hell the filmmakers were thinking with this sequence. Everything slows down to a crawl, even the fights. As he's walking around this empty village a towns person comes out of nowhere and a fight ensues, in incredibly boring slow motion. One after another either a slow fight or a slow foot chase. To me, it felt like a good chunk of this film was dedicated to this ridiculous and completely out of place sequence and after it's all said and done, it's the sequence I'll remember most about the film because it's what ultimately killed the film for me. That's just me though, it might not be all that bad for other viewers.

I love how there's always miraculously and conveniently a balance beam or a pommel horse in this tiny little village in the middle of nowhere for Thomas to show off his moves. My favorite is when he gets surrounded by a mob of a hundred villagers and amazingly finds a pommel horse and proceeds to knock the shit out of each and every one of them. Funny stuff. And  the filmmakers decision to make every villager in this film look as hideous as humanly possible is another strange and funny aspect. The blackening of the teeth and the dark circles around the eyes look so bad and lame and amateurish that you can't help but laugh and wonder if it was done on purpose for laughs or not.

This is a bad film from every angle and if you're looking for a good laugh with friends, then this is the film for you. And it would be a decent film for that alone if that last section didn't kill the film completely in it's odd and unsuccessful decision to turn into a different film altogether and ultimately leaves you bored to death.
Posted by robotGEEK at 9:50 PM