Badass finds of the day! 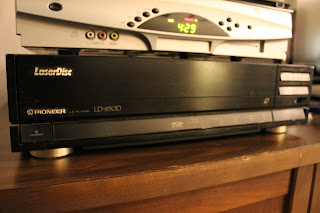 So let me just start off by saying that I've been trying to get my hands on a Laserdisc player for a few months now. I could find lower brand ones on eBay and Amazon for roughly around $50 on up. Of course they're all used and almost all do "not" come with a remote. And the Pioneer's are way more expensive, I guess they are considered top of the line in Laserdisc players. Those easily go for a few hundred at least. But I check here and there on the internet cuz you just never know.
Today I decided to hit a local antique store. Here in my town we have an entire street dedicated to antique stores and it's hard to choose which one to stop in at. I chose one and after browsing the entire store for an hour we make it to the very back where they were selling a lot of vintage vinyl records. Under a pile of trash and an enormous pile of dust I found this Laserdisc player. I almost screamed for joy. Unfortunately the guy who was selling it wasn't there at the time so I had to wait a little while till he came back to ask the price since there wasn't any prices on anything back there. When he finally showed up he said that he forgot he even had this and didn't even know if it worked or not since he never tested it. I asked if it did work, how much would he sell it for? He said $20. For $20, what the hell? I'll take it!
I took it home, dusted it off and am extremely proud to say that it works magnificently and on a plus side, besides being a fucking PIONEER, is that it had The Abyss Special Edition Laserdisc still in it! You can say I'm on cloud 9 right now. The player itself is in remarkably good condition once I took all the dust off and wiped it down. Almost looks new. Only thing is that it did not have a remote, which means I'll have to physically get my ass up off the couch to actually touch the buttons on the thing. Small price to pay for such an enormous amount of enjoyment. 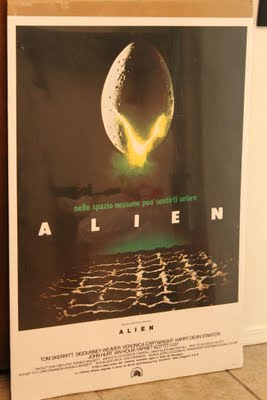 Second awesome find of the day in the same antique shop was this Italian Alien One Sheet.
Again, no prices on anything so I asked the guy how much and he said "eeeehh, $10?". Sold!!
Now, I'm hesitant to call this an "original" one sheet because I honestly do not know and do not want to get my hopes up, I'll have to do some research first. But it looks like the real deal and if it is an authentic original Italian one sheet, this thing could potentially (at least I'm hoping it is) be worth a lot of money as it is in near mint condition with only a dent on the bottom left corner. No holes, tears or folds anywhere.

I'm telling you, this was the coolest day ever!
My intentions originally were to look for old VHS tapes that these stores "may" have had lying around or something. I had no idea that I'd be lucky enough to spend $30 and get a PIONEER Laserdisc player and a "potentially" vintage Alien Italian one sheet in near mint condition. I'm tellin' ya, what a day.
Posted by robotGEEK at 3:01 PM