Recently I decided to revisit Heavy Metal (post coming soon), and while I was never all that much into it growing up, except for the constant barrage of animated nudity , I really only ever cared for 2 of the stories; the one about the cabbie in the futuristic New York, and the one with the B-52 Bomber. But as with a lot of my film experiences, my tastes change as I get older and ultimately I enjoyed Heavy Metal much more this time around. But that experience led me to another one. This past year I've been experimenting with mushrooms for the first time and it was during my last trip that out of nowhere, the VHS cover for this movie popped in my head. I guess you can say I've been on a bit of an animation kick lately, having revisited Heavy Metal and diving deep into some animated shows like Batman: The Animated Series (thanks to HBO) and M.A.S.K. for instance. So somewhere in my subconscious, this cover had always been there because I've never actually seen the movie, but I do recall seeing this cover at my local video store's back in the 80's and 90's. And boom! Just like that. During a very pleasant psychedelic trip, Light Years pops in my head and thus began my quest to track it down in some way. 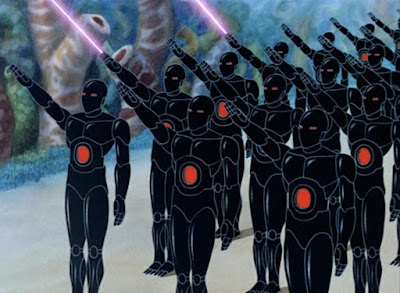 Released in 1987 under it's original title Gandahar, Light Years is a French production courtesy of Fantastic Planet (1973) writer/director Rene Laloux and it is honestly one of the best damn animated films I've ever seen in my life. In fact, it may very well be my new all-time favorite animated film ever. And there's just so much to love here. But I should mention, I have only seen the Americanized version. The Weinsteins released this in the U.S. under their Miramax label back in 1988, and recut, re-edited and rescored the film to appeal to American audiences. This U.S. version is a few minutes shorter, and now contains more of a progressive rock/synth score, which honestly works for me because it blends with the vibe of the film so splendidly. They also dubbed the film with American actors such as Jennifer Grey (Dirty Dancing), Bridget Fonda, Glenn Close, Christopher Plummer, Penn Jillette and most impressively John Shea (Lois & Clark: The New Adventures of Superman), who does an outstanding job as the lead Sylvain. 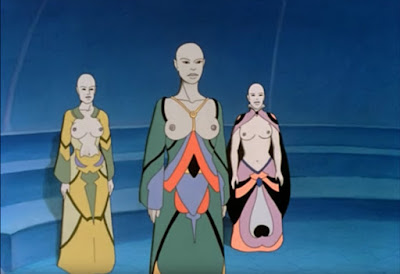 I kind of half-expected this to have some rotoscoping animation (because that technique seemed to be prevalent during this time), which would have been fucking sweet, but to my surprise it didn't. But that doesn't matter because the animation in here is stunning as it is. But I think what really just floored me was how much science fiction was involved when I was mostly expecting a fantasy. I guess you could say that it's an equal blend of both, but for me personally, I was pleasantly surprised at how far into sci-fi it went. For so much of the film you see this awe-inspiring army of black robots causing destruction and catastrophe at the behest of their leader Metamorphis (Christopher Plummer), and it's just so insanely badass every time they're on screen, played with great effect to some synth rock. 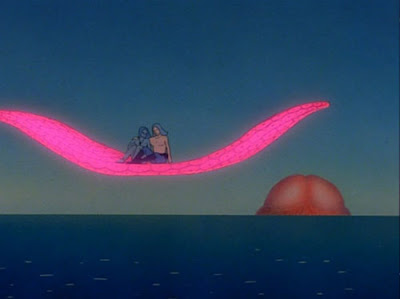 Going in, I knew literally nothing about it. So the voice cast was a nice surprise, and reading up on it a  bit, I'm kinda shocked to learn that it's not universally loved. My guess is that because it's a bit "trippy" (because it totally is), and it's more talky than you'd expect from an animated film, it comes across as more of an adult film, with a story and not just a lot of violence, nudity and action. It has all of those things, but at it's heart, there's an actual story about a perfect utopian society who's world is driven to chaos when an army of robots invades their genetically modified race to destruction. And while I do enjoy the story, it's all about the visual eye candy for me, and Light Years is oozing with gorgeous visuals from start to finish. Combined with an excellent score, an outstanding voice cast, and such a unique tone all around, Light Years will surely be a film you'll not soon forget. 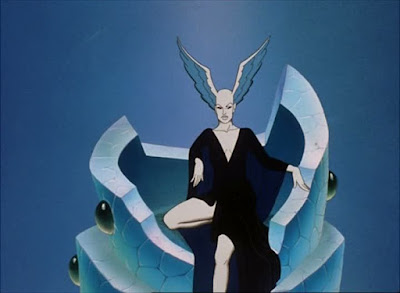 Now to the bad news. To my shock, it's never gotten an official release here in the states other than VHS, Laserdisc and it's limited theatrical run all the way back in 1988. Sadly there has never even been a DVD release here, much less a Blu Ray, and I was really stoked to snag a copy of this immediately after watching it. This needs to be in my collection! I have seen a Region 2 DVD floating around the secondhand market, which goes for astronomical prices. There's a bootleg from S. Korea you can get pretty cheap, but I can't vouch for it's quality. But there's "some" good news. A very kind and generous soul has uploaded it to YouTube in HD under it's original title "Gandahar". So having a physical copy may not be in the cards for us anytime soon, but at least there's a way for us to watch it, even if it is in full frame. I do hope someone snags the rights to this and releases it officially, in HD and in widescreen some day. It deserves to be discovered, at this rate, by several generations now. 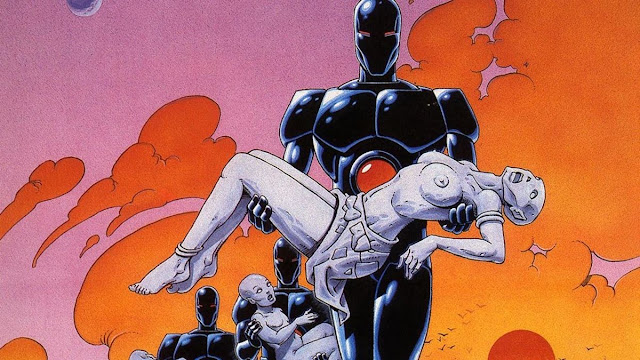 Posted by robotGEEK at 4:42 PM