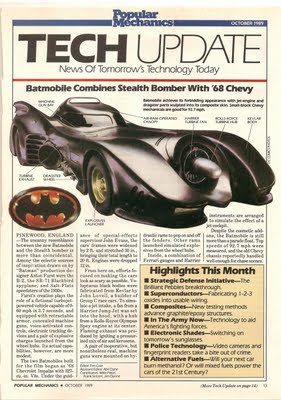 Slow day so I thought I'd post this awesome vintage Popular Mechanics magazine article I found over at VHS Wasteland. I remember when this first came out and images were starting to leak out in magazines (this was before there was the internet in every household) before it's summer release in 1989. It was something so new and fresh and completely unique that I immediately fell in love with it.
This was and always will be my favorite version of the Batmobile. It was basically the same in Batman Returns, but they made a few minor modifications to it.

I detested what they did to it in Batman Forever. But when Tim Burton's Batman came out in the summer of 1989, next to the badass truck that Tango & Cash drove at the end of that film in the same summer, I thought this was the coolest fucking car I'd ever seen in my life. I even like it more than the old Batmobile from the Adam West show.

I don't know, there's just something about the design of it that always blew me away. It's so dark and gothic, completely impractical of course, but man does it look badass charging down the street.
Thanks to VHSWasteland.com for the article.
Posted by robotGEEK at 2:27 PM