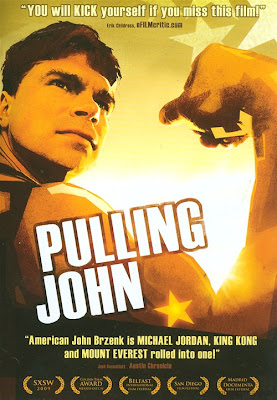 Casually browsing Netflix Instant this past weekend I came across this fascinating and completely engaging documentary about the world of professional arm wrestling. You know, I actually had no idea that this was even a "thing" anymore. But it is and apparently it's pretty huge all over the world. You don't hear or read about it in the news or sports pages and even more shocking to me is that outside of the United States, it is a government funded sport program. The U.S. is one of the only places in the world where it's not recognized by the government or funded, but elsewhere in the world it's even taught in schools. Crazy!

Right from the opening frame this documentary pulls you into the lives of amateur and professional arm wrestlers, all with one common goal; to beat John Brzenk. You see, the mild mannered and unassuming Brzenk has been the world champion arm wrestler for the last 25 years without having ever lost a match, no matter the size or stature of his opponents. Pulling John follows Brzenk as he contemplates retirement as he hits 40 and wonders if there is really anybody out there that could actually beat him. He notices also that because of his age, his endurance is lessening and if there is a much younger and stronger opponent out there worthy of a challenge, will he be able to last in a match of strength and endurance if he doesn't take him down within the first 5 seconds?

Synopsis via IMDB:
John Brzenk is troubled by when to call it quits; should he retire when he is on top or wait until someone takes his title. After twenty-five solid years of total world domination, John Brzenk, is aware that his dethroning may be near, he just doesn't know the cause. As the prodigal arm wrestler, Brzenk excelled in a way that seemed humanly impossible. Hungry for the best arm wrestling competition, Brzenk traveled the world beating every opponent. With a humble and understated character, his legend supercedes him in the hearts of arm wrestlers in over 120 countries. Among the super warriors of arm wrestling are 2 titans from opposite ends of the world, bonded by one defining goal, to beat John.

In Pulling John, we're introduced to 3 main characters, John Brzenk, Alexy Voevoda and Travis Bagent. Brzenk (the world champion 25 years running) and fast rising up and comer Travis Bagent are both from the United States while Alexy Voevoda is from Russia. Both Travis and Alexy have grown to idolize John Brzenk in there young lives, knowing that if Brzenk continues to compete professionally each of them will have to likely face each other and ultimately attempt to defeat Brzenk if they ever want to claim the crown of arm wrestling champion of the world. No matter what part of the world you are from, John Brzenk is the all time reigning champ.

I think what's really fascinating is that Brzenk is so completely unassuming. He's not very big, yea you can tell he works out, but you'd never in a million years guess he's the all time world champion arm wrestler for the last 25 years just by looking at him. By trade, he's an airplane mechanic, and uses that career to be able to fly free anywhere in the world when he has to compete. Right there that shows you how smart this guy is. And he's so mild mannered and extremely humble too. That's one of the things that's always said about him whenever any of the amateur or professional competitors are talking about him, even the cocky arrogant guys. They look up to him because he's one of the nicest guys you'll ever meet. There's no attitude or arrogance about him at all; he's just happy to be doing what he loves and somehow keeps winning. Unlike the young and rising up and comer Travis Bagent. He's loud, obnoxious, arrogant and completely cocky to a fault. It's one thing when you want to be the world arm wrestling champion, but it's another thing when your an ass and nobody likes you. In arm wrestling, they push sportsmanship and basically getting along and helping each other out. There's no reason it has to be ugly. But Bagent see's things differently. He's there to kick your ass. He's not there to make friends or be nice. Alexey on the other hand is the complete opposite of Travis Bagent. Though he's much bigger than both Bagent and Brzenk, Alexey is always calm, cool and collected 24 hours a day. Never losing his temper, talking smack or even getting excited. He's knows he alone is representing his country and cherishes that responsibility more than anything.

One of the most fascinating aspects of Pulling John is how Brzenk is able to keep winning, even though he's almost twice there age and smaller in size. And that's a big issue in this documentary. Somehow, some way he's able to possess this incredible strength that defies explanation. What the documentary ultimately boils down to is a final "big" match at the end where all three of these guys meet for the biggest arm wrestling championship to date. Whoever wins this match becomes arm wrestling champion of the world and the directors here have gotten you invested so deeply into all of there lives that when the final showdown hits, you don't know who to root for and it's completely riveting. We were actually screaming at the television during this final showdown because it was so intense. I hadn't had that kind of reaction from a film, let alone a documentary, in a very long time. I think more shocking than anything for me is that this documentary is two years old and I've never heard of it until now. Do yourself a favor and check out this thoroughly entertaining documentary while it's currently still available on Netflix Instant. If you're like me, you'll be screaming and hollering at the television by the end and wanting to arm wrestle everyone in your family.