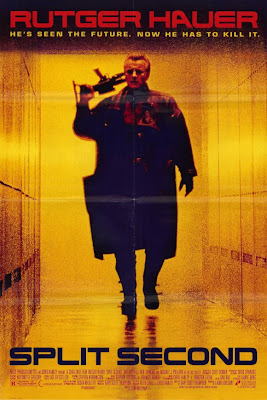 Low-budget sci-fi at it's best. Make no mistake people, despite what some naysayers might complain about on the internet about the quality of this film, Split Second packs a serious punch from beginning to end and what it lacks in budget and spectacle, it makes up for in style and originality. I hadn't seen this since it was first released back in 1992, but the years have definitely been kind to this B-movie sci-fi gem. I know that when this was released, it had all the backing of a big budget theatrical release, but I remember it kind of fizzing out almost immediately and not really doing very well. It's a shame really, because it's got all the necessary ingredients for a B-movie sci-fi cult classic.

I was recently reminded of this film when my buddy Ingo over at Hellford667 Movie Reviews did his own review of it a few months back. You can check it out his badass review here. But it got me trying to remember pretty much anything about it since it had been so long, but I just couldn't. All I really remembered was that Rutger Hauer looked cool. And of course as with most of our cult favorites, Split Second had a limited official U.S. DVD release and has long been out of print and in Full Frame. Me, I got on eBay and snatched up my own VHS copy immediately for a really, really good deal and I'm so happy I did. This film was badass. I can see and understand why it didn't make it in the theaters, but on home video it's great B-movie cinema. You've got guns. You've got a monster. You've got a futuristic London partly submerged underwater. You've got a decent amount of blood and gore. And you've got Rutger Hauer! What the hell more do you need?

Split Second is a little cheesy, but it's a good thing when you're trying to combine all these different genres elements into one film. It's got a good mix of action and horror, and when Hauer is hamming it up, it can even be a little silly. But the film looks great, not stylish to a fault or anything, but it's got a constant visual presence to it that to me resembles some of director Albert Pyun's best work. I could easily have seen his name credited as director on this. The script could have used a little work and of course there are a lot of plot holes,  especially when trying to figure out how this giant monster is able to move around unnoticed in the city. But whatever. Hauer looks badass in this clad completely in leather from head to toe and he walks around with an arsenal of at least 5 guns, most of which look like they came right outta Blade Runner, which is awesome.This guy is ready for anything.

In the year 2008, extensive damage caused by global warming has left London submerged under several feet of water with light rarely ever penetrates the smog ridden skies. Homicide detective Harley Stone is a man on the edge who functions on a day to day basis on "anxiety, coffee and chocolate". After witnessing and ultimately not being able to prevent his partners murder by the hands of a serial murderer, he's a loose cannon nearing his breaking point. After several years the murders start up again and seem to be luring detective Stone personally with each new murder. Each one includes a sign or a new message that brings Stone and his new partner officer Durkin closer to figuring out who is behind them. The closer they get, the closer they realize that this serial murderer might not even be human after all and might be personally targeting detective Stone.


This role is just perfect for someone of Hauer's caliber. He's such a cynical and overly violent prick, but Hauer plays him with such ease and a little over the top that you just can't help but root for the guy, even when he's being an asshole; which is often. His first gut reaction is always to react in violence. I swear, I've never seen someone slam so many people up against a wall unnecessarily like he does in this, it's kinda ridiculous but hilarious at the same time. You say something snide, he slams you up against the wall. You look at him wrong, he slams you up against the wall. You ask a question, he slams you up against the wall or puts a gun in your nose. I actually started trying to keep count at one point, but lost my count as it became obvious it was in vain.
We're given a really nice well rounded cast of supporting actors in this as well. Kim Cattrall shows up as an ex-girlfriend who gets kidnapped by the killer in an effort to lure Stone into a trap, and we've also got Pete Postlethwaite (surprisingly), Michael J. Pollard and Alastair Duncan as Stone's new partner, all adding commendable weight to the roles.
I really liked the look of the film also. The decision to have water as a main theme running throughout lends the film a sense of originality in an ever polluted world of low budget sci-fi films. And it's not like Waterworld where the entire planet is covered in water, it's just like a light flood where you can't move around unless your in a hovercraft or a big ass jeep equipped to move in high water. Everything's wet or partially submerged which immediately adds a sense of difficulty in doing just about anything, let alone trying to catch a killer who might be using the water to his advantage. And visually, the constant presence of water gives the film a certain look that easily distinguishes it as maybe a little more creative.

I was pleasantly surprised how much I thoroughly enjoyed this from beginning to end, even if the ending left a lot of people a little disgruntled. I didn't think it was that bad. I'm not really sure what most peoples issues were with it. It did have an action packed finale, and when the creature is finally fully revealed it's a lot better looking than most of the creatures from these kinds of films, even if were still only shown it in quick glimpses. Leave some to the imagination I say.
If there was anything that I had to really complain about, it might be that though there was "some" and it did look nice, there could have been some more action. Especially when he finally busts out his cannon's here and there and get's to actually use them. They do some serious damage and I would liked to have seen some more sequences of him blowing shit up or pulverizing some bad guys.

I always hated the American VHS cover of this one. I hated that it looked cheap with no effort put into the cover art and I hated that they actually show the creature on it. In the movie you don't see it until the very end,  and they don't even fully say that it's a creature at all until halfway through, always eluding to the fact that it could be a man, some kind of monster or a hybrid of both. But for some reason they decided to just give away the whole mystery by putting it right on the damn cover. Nice going.

I really hope this gets a decent U.S. DVD or Blu-ray re-release some day with the proper aspect ratio. Even if it came without any special features, I'd just really like to see it in it's original 1:85 format. Though it looked fine anyway in Full Frame (especially if you watch it on a Widescreen T.V.), it's the kind of film that could really pack a punch in it's proper Widescreen exhibition. Though I do believe the Region 2 DVD "does" come in Widescreen. I think I just need to finally invest in a region-free DVD player. I'm not sure if the Japanese VHS came in Widescreen or not, but if it did and if somebody ever comes across a copy, please let me know. I'd be happy to work something out.