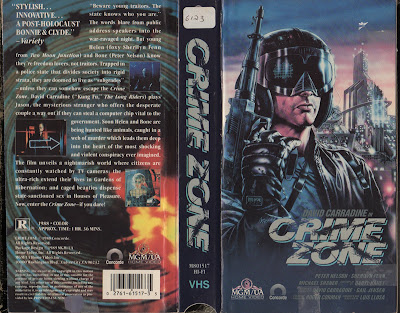 One of the things I always know is that there is always a 50/50 chance that the movie I'm about to watch won't be any good. There have certainly been a few examples of that in the recent past, but for the most part I can find some kind of redeeming quality that will let me forgive the rest of the film's shortcomings. Maybe it has an insane amount of action. Maybe it's just so bugnuts insane that it ends up being all kinds of crazy awesome. Maybe it's stylishly directed to a fault and though the story might suck, it at least looks good.
This film has none of those things going for it and in the end it's nothing but a complete bore. Amateurishly directed with practically zero amount of action to even give it the slightest amount of redeeming quality really leaves you wondering what the hell kind of film they intended to make. It's certainly not a science fiction film, and it's neither an action film nor a thriller.

First off, I need to point out that this VHS cover is 100% completely misleading. This cover is pretty much the main reason why I actually put effort into seeking this thing out. It looks cool right? You've got John Carradine's name over the title and Roger Corman producing and along with that cool cover art I thought this would at least be a badass craptastic piece of trash cinema. Nope, not by a long shot.

Beginning with the cover art, with Carradine's name over the title of the film, I actually thought that was him on the cover art. I also thought he was the star of the film. Nope. In truth, he doesn't show up until at least 30 minutes into the film and at first he plays a shadowy figure who later is revealed to be somebody else who shows up here and there. But still, that's not him on the cover. In reality, that's not anybody from the movie. A total misconception. Maybe the fault lies with Roger Corman since as I saw recently, he recycled the same exact poster 2 years later for another one of his films starring Don "The Dragon" Wilson called Future Kick. Yea, they made some changes to it obviously, but come on, it's pretty much the same. In Crime Zone, nobody looks like that artists rendering on the VHS cover and the city does not look like that either. It resembles more of a post apocalyptic wasteland future instead of the shiny bright lights with beautiful skyscrapers as shown on this cover. In fact, there's not a single shot that takes place during the day, instead using the darkness of night to mask the complete lack of futuristic sets. And when it comes to futuristic, the filmmakers apparently think that if you put enough neon lights on everything, including pool cue sticks during one sequence where the two stars of the film are playing a game of pool in a bar.

Honestly, I don't even want to waste my time with the plot or anything like that as you're probably not ever going to see this film and for good reason. When I saw that it was directed by Luis Llosa, who later went on to make bigger budget films like Sniper, The Specialist and Anaconda, I thought it would at least have had the look of a competent and even handed film. Again, not the case here. It looks amateurish and even in the world of low-budget direct-to-video films, very bland and unimpressive to say the least. Obviously, with a cover like this you are expecting to see a science fiction film with some action. Instead this plays more like a drama, not even a thriller, just a drama and I was so bored from beginning to end because of the lame directing and incredibly weak script that I just didn't care about any of the characters or about anything that was going on. A sex scene with Sherilyn Fenn can't even save this piece of trash. I can't remember the last time I was so bored out of my mind while watching a movie.
Posted by robotGEEK at 6:13 PM