It’s Halloween 1989 and best friends Sam and Josh are just trying to enjoy their last “Devil’s Night” before graduating high school. Trouble soon arises when the two pals and a group of friends take a detour on their way to a rock concert, finding an old abandoned barn and awakening the evil inside. Now it’s up to Sam and Josh to find a way to protect their friends and defeat the creatures that lurk within The Barn... The film stars Mitchell Musolino, Will Stout, Lexi Dripps, Cortland Woodard, Nikki Darling, Nickolaus Joshua with Linnea Quigley (Night of the Demons and Return of the Living Dead) and Ari Lehman (the first Jason Voorhees from ‘Friday the 13th’). Featuring an original score by Rocky Gray the former member of Grammy award-winning goth/rock group 'Evanescence'.


The Barn Merch Store now has The Barn Blu-ray IN STOCK for only $20 (It is currently being pre-ordered on Amazon for$34.99).  Purchase directly from their site and they can pass the savings on to you! Get our Limited Blu-ray release that will feature some really great additional goodies and even more bonus content not included on the 2 Disc Trick or Treat Set DVD.

Less than 120 copies out of 1,000 remain available from our first Blu-ray run. Order now so you don't miss out!!!
Via The Barn Merchandise Store:
The #1 question we receive on this site is..."Why no Blu or Digital?" Well, long story short...its been due to distribution talks and the need to have the ability to license rights...oh the joys of the business side of film-making.
Good news for you though, because of our multiple talks with distributors we now have the ability to sell the Blu-ray ourselves.The Barn Merch Store is now accepting Limited Blu-ray Sales for $19.99 (It will be available on Amazon for $34.99 list price).
Purchase directly from our site and we can pass the savings on to YOU! Get our Special Edition Blu-ray release that will feature some really great additional goodies and even more bonus content not included on the 2 Disc Trick or Treat Set DVD. This is will not be the same Blu-ray (if we accept this the distribution deal) that could be released nationwide in 2018. You can also upgrade your copy to an "Autographed Blu-ray*" including signatures from Ari Lehman, Linnea Quigley and available cast and crew!
This Blu-ray will include a reversible sleeve featuring the classic "Sadist Art Designs" artwork on one side and a brand new design by "Graham Humphreys" on the other showcasing iconic scenes from the film.
This will include even more bonus content not included on the 2 Disc Trick or Treat Set DVD. Bonus Content Listed Below. 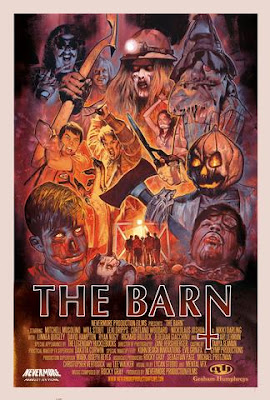 - "Razor Blades and Candy Bars"
- "The Legend is Real"
- "Grave Danger"
• Alternate Ending
• “Harvest” Music Video by Rebel Flesh
• “All Hallow’s Eve” short film
• “World Wide Weird” London premiere reactions
• Trailers
• Commercials
• Original storybook
• Reversible cover artwork by Marc Schoenbach and Graham Humphreys
Number of Discs: 1
Single Layer Blu-ray Disc (25GB)
Region Free (Factory Pressed/NOT BD-R)
Unrated/Color/16:9 Widescreen/80 Mins
Subtitles: Spanish
*Autographed Blu-ray- guaranteed signatures from Ari Lehman (Dr. Rock), Linnea Quigley (Ms. Barnhart), Mitchell Musolino (Sam) and Justin M. Seaman (writer/director and The Boogeyman) and any available cast and crew members. The original artwork by Sadist Art Designs is the side that is signed, not the reverse new art.
You can now bring home the critically acclaimed and multiple award winning indie hit 'The Barn' on Blu-ray.
Voted “Most Anticipated Horror Film of 2016” on Horror Society, praised as “A Stunning Portal into Campy 80’s Horror” by Bloody-Disgusting and said to be “A film that will bring the Halloween spirit into your heart at any time of the year...” by Tom Holland’s Terror Time.
Posted by robotGEEK at 9:23 AM