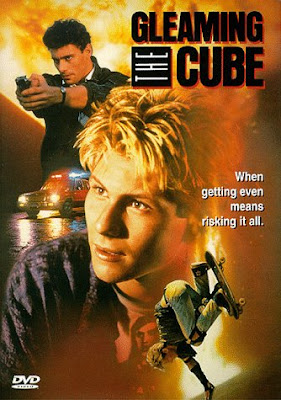 Gleaming the Cube, one of the last skateboard films to come out of the 80's, has retained it's status as one of the best of it's kind for a number of reasons. For starters, it's a standout among the crowd because it's primarily more of an action/thriller rather than a film about skateboarding. There just happens to be some skateboarding in it because the main protagonist, Brian Kelly (Christian Slater), is an avid skater via the late 80's. And while the film in general is a great crime/detective/action/thriller in it's own right, it's really in it's "skater" moments where Gleaming the Cube really shines.

This was a film that was such a huge part of my teenage years, when the skateboard trend really seemed to hit it's peak. I wasn't a skater, but my brother and his friends were. I just loved the film because I thought it was awesome. And I remember watching this often, either as something playing in the background, or with a group of friends fascinated by the fact that a very young Tony Hawk, already a certified legend, had a bit part as one of Brian's crew. It was just one of those films that was always on, or we always found time to watch. Having not seen it all these years though, somewhere close to 30 to be exact, I was somewhat surprised to discover, or rediscover, that unlike Thrashin', this really wasn't necessarily a skater film per say, but rather a crime/thriller about an adopted straight-lace teenager who mistakenly stumbles upon a scheme to sell and smuggle firearms into Vietnam, only to be murdered by his boss's henchmen. When Brian, his troublemaker brother, realizes that his adopted brother may have been murdered and not committed suicide (staged by the henchmen), he sets out to solve the murder himself when he's met with constant frustration and no help from local detective Al Lucero (Steven Bauer), putting his skating talents, and his skating crew, to good use. And it's really this angle that I found so intriguing, when this film could easily have been another run-of-the-mill skateboarding film about a local competition or a turf war against another local skate gang. I loved that it was about something else entirely, only incorporating the skateboarding aspect a good half the time to full effect. 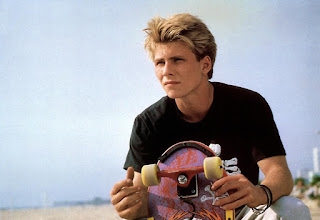 Christian Slater, who had just co-starred in the dark comedy cult hit Heathers the previous year, really does a killer job in the role of a troubled, moody, adolescent teen who despises authority and relishes the role of the black sheep in his well-to-do upper class family. His constant conflict with his father and repeated headbutting with local detective Lucero only feed his growing anger and quest to solve his brothers murder, even if it means putting his own life on the line, which he repeatedly does. Slater is just excellent here. It's strange to think this came out after Heathers, because you'd most certainly assume it was the other way around. He looks a bit younger here, and his Jack Nicholson impression isn't nearly as prominent. He handles the skating sequences like a pro, even when you don't believe for a second that it's really him doing some of the bigger stunts, which he clearly isn't. Mike McGill and Rodney Mullen were Slater's skate doubles. The bad wig is a dead giveaway, but still highly amusing to try and spot the moments when these pro's are actually doing the tricks. There's even a hilarious sequence when Brian is so pissed off at the world and decides to go skate his frustrations out in a parking garage and it's just hilariously cheesy awesome. He's so angry, and this rock song is playing, and even his skating is angry, and the fact that it's very obviously not really Slater skating but someone else with a very bad wig. It's awesome, and I love that about this film. It tries so hard to be serious, but you can't take this shit seriously. Regardless of the amusing stung-double, Slater does a great job in the role and is strong enough to carry the film squarely on his shoulders. 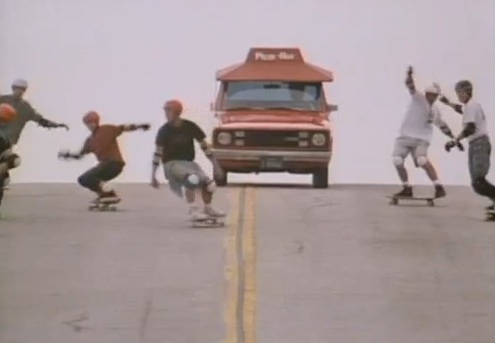 Australian director Graeme Clifford seemed like a most unlikely choice to direct this sort of film, mainly since he had only done television work and dramas prior to this. Yet he handles the material and the job with ease, giving the film a slick detective thriller look, even in the skateboarding sequences, which always seem to find their way into the storyline and action. He also makes the most of the California setting, utilizing a lot of aerial shots showcasing the mountains, hills, swimming pools (big part of the film's narrative), and palm trees. Skateboard legend Stacey Peralta actually worked as the second unit director shooting all of the skateboarding sequences in here (who better?!) and composer Jay Ferguson adds a deft touch to the material with another fantastic score.

All in all I had a blast revisiting this 80's gem. It's fun, engaging and so fucking nostalgic that it's impossible not to have a smile on your face. I was flooded with a barrage of amazing memories and there were things that I had forgotten about, like the fact that Peter Kwong (Never Too Young To Die, Big Trouble in Little China) was in it! It's a far better film and experience than I was expecting, as well as a totally different genre of film altogether, which still surprises me when I think about it. Gleaming the Cube is wholly deserving of it's reputation and cult status. It's a film that plays on it's reputation effortlessly in such a satisfying way, without throwing it in your face in a vulgar way. It's hip, without even trying. It's fun, when it's supposed to be serious. It's nostalgia on crack when it was just a thriller involving skateboarding. All of these unintentional elements make for a fantastic viewing experience. 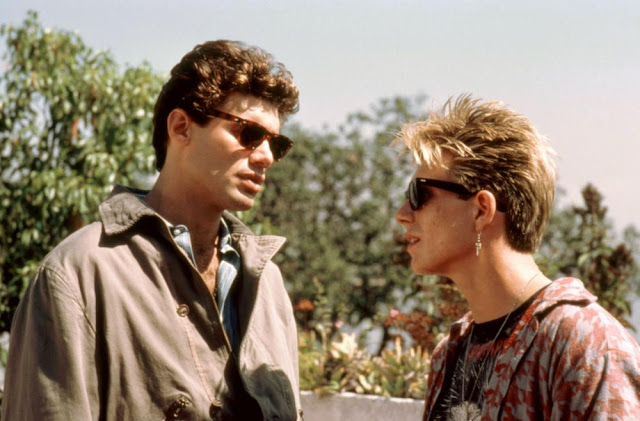 How to watch it:
Still no Blu Ray as of yet, but even so, the VHS and DVD aren't hard to find on the secondhand market, but can run you anywhere from around $20 on up. If you're diligent, you'll sure to come across one for cheap. It took me a few years of patiently waiting until I snagged a VHS within my comfortable spending range. The mega-rare Laserdisc is even harder to find, and far more expensive should you ever come across one. Unfortunately none of these have ever been released in widescreen officially, at least not here in the U.S., including the 1999 DVD release from Geneon (Pioneer), which is full frame. I'd love to see this on Blu ray though, with a cleaned up image, in widescreen and a healthy dose of extras. I'd love to see all of those skate legends discuss there experience working on this all these years later, and how much this film ultimately influenced a generation of skateboarders. Here's to hoping someone like Shout! Factory will heed the call.

Posted by robotGEEK at 1:41 PM