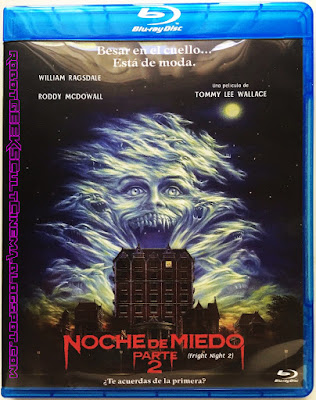 For as long as I can remember, I've always loved Tommy Lee Wallace's Fright Night 2. While I can agree that Tom Holland's original is a better and stronger film all around, there's just something very special about the sequel that I seem to connect to more. I love it's style for one. Wallace really delivers some impressive visuals here, more in line with his work in Halloween III: Season of the Witch than anything else he's ever done. And while both Fright Night's are 80's films, this one seemed to grab that delicate late 80's/early 90's vibe by the throat magnificently. Of course, I realize I'm probably in the minority on this. Whenever I discuss it, I seem to be the only one for the most part who enjoys this one more than the original.

Being a fan, and as I'm sure you may or may not know, Fright Night 2 has had a controversial history as far as releases go. For starters, it's only ever been released on DVD once, by Artisan, and in dreaded full frame, with zero special features. It's about as bare bones and dull as can possibly be. And even then, because that was the only digital release we ever got, it's been OOP for so long that the prices for that extremely lacking release are outrageous and nowhere near worth what sellers are asking. I mean, I love the movie, but not enough to shell out $100 for a low-quality bare bones, full frame DVD. That's ridiculous. I don't know what the deal is with the rights, but even today, that is the only release we've gotten in the DVD/Blu Ray market here in the United States. Even in the fantastically entertaining Fright Night doc "You're So Cool Brewster", the stars also question why it never got a legitimate release, both theatrically or on DVD outside of that lame initial Artisan presentation, even though the fans have been begging for one now for decades. That's why these foreign releases are so important, because they afford us the ability to finally get our hands on something we've been so eager to for a very long time. 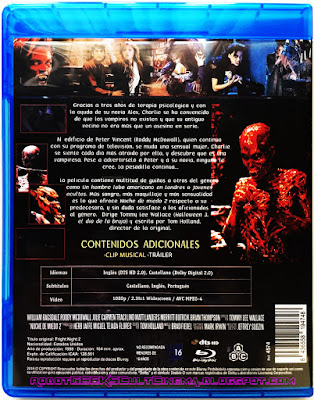 This particular Blu Ray comes to us courtesy of Spain. It's free of any type of extra's in the way of special features, but what you do get is the best transfer of this film to date in glorious HD. Better yet, it's in widescreen and the only official way to get this film in that aspect ratio. Some may argue that widescreen is no big deal, but I have to counter-argue with the fact that yes, it is. There are certainly films out there that benefit greatly from this format, and Fright Night 2 is one of them. Wallace put a lot of work, style and pizzazz into the visual aspect of the film and to truly enjoy and appreciate it, you have to see it in widescreen. Full frame does not do it justice.

This Spanish release, released September of 2016, is Region A, B & C, making it playable in U.S. Blu Ray players. However, I should warn that Sony is typically not compatible with Region Free releases, something I've learned personally these past few years. Luckily I have an XBOX ONE in the house, and use that for my Region Free releases until I finally get my hands on a Region Free player.

I have to admit that despite it's lack of special features, the film transfer itself is very impressive. While there are bootlegs out there that are also in widescreen, they seem to have been taken from Showtime's airing of this in HD. I also own one of these releases, and I will admit it's good, but it's not nearly as good as this 1080p Spanish release, which is exquisite. The English Audio is DTS-HD Master Audio 2.0, with subtitles in Spanish, English and Portuguese. The aspect ratio is at 2.35:1 widescreen. Ultimately it's another no-frills release, only in an exceptionally clear HD quality in widescreen, which is the most important thing really. If you want extras, I encourage you to track down "You're So Cool Brewster: The Story of Fright Night 1 & 2". It's an orgasmic 3 and a half hour fun-filled trip down memory lane where you learn nearly every single aspect of both Fright Night's production.

The good news is that even though this is from Spain, you can find it generally easy on eBay and other online retailers here in the U.S., and for relatively cheap; usually under $20, which is a steal. I ended up finding my copy at a store called Waterloo Records in Austin, TX. Until we get our first official Blu Ray release here, this is the next best thing.
Posted by robotGEEK at 10:33 AM