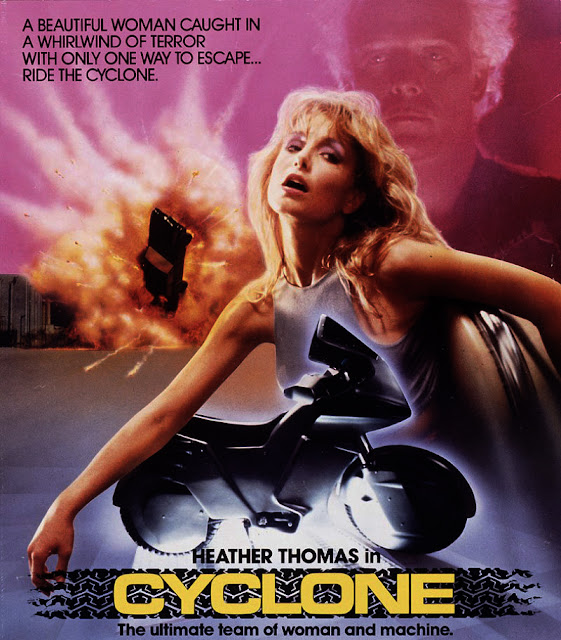 Where has this film been all my life? Believe it or not, this is the very first time I've ever seen it, and I'm literally kicking myself for not having seen it sooner. Really, I have no excuse. I'd always known about it, but I guess I didn't know enough about it to really want to seek it out, like the fact that it co-starred Jeffrey Combs, and that it was directed by Fred Olen Ray in his early days, when he was delivering quality work. Something made me remember this recently, and I remembered that I had this as part of a 4-pack DVD set from Shout! Factory, so it was on! No excuses. Let's dig in.

For my personal tastes, it literally has everything I could want in a film like this: hot babes, lots of explosions, a super slick bike, Dar Robinson as a bad guy, rad 80's synth score and a short running time that's filled to the brim with just enough action, cheese, stunts and nudity to make this one a breeze to sit through. I think the main thing that pushed me to finally see this was the fact that Fred Olen Ray directed it right after his 80's action classic Armed Response, so I hoped that maybe some of that quality transferred over to this one, because let's face it, from the late 80's on it pretty much went downhill for him. 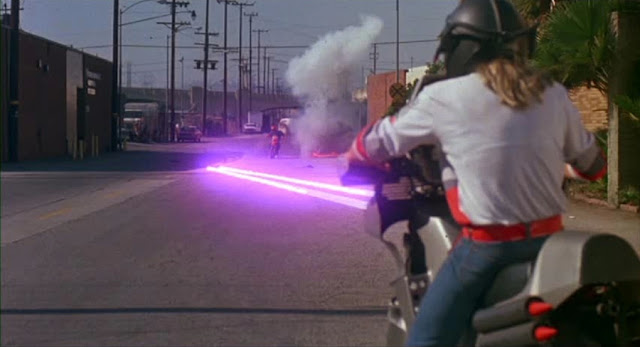 Heather Thomas stars as the hot girlfriend of a nerdy scientist (Jeffrey Combs) who must keep the top secret bike he's been working on called the Cyclone out of the wrong hands after he's murdered. Thomas, who had just ended her stint on The Fall Guy just the year before, really shines here. It's a damn shame she never broke out as an action heroin because here, she proves she can hold her own against anyone and look damn fine doing it too. Fred Olen Ray, who's no stranger to shooting beautiful women in all their glory, does a fine job capturing all of Thomas' best.....ahem....ASSets. When you see the innumerable shots of Thomas' ass in sprayed-on jeans, you'll know what I mean.

For me, the best thing this film has going for it, next to the insatiably cute Heather Thomas in the lead, and I can't believe I'm actually saying this, is Olen Ray's ability to shoot it with a certain style. This film, for all it's cheesiness, looks pretty great, minus some lazy camerawork here and there. But for the most part, Ray puts just as much effort into making it look good, especially in the action department, as he does shooting Thomas' ass. It's done in an even-handed way and never looks or feels rushed, which goes a long way in films like this.

I think one of Cyclone's biggest assets is it's casting. Sure there's Heather Thomas killing it in the lead, but then we also have Jeffrey Combs as the Cyclone inventor and nerdy boyfriend. As much as the casting of Combs was a really nice surprise, the thing that really got me excited was having legendary stuntman and actor Dar Robinson as one of the main bad guys. He just has such a unique look and energy about him that he really puts any other villain in any film he's in to shame. It happened in Stick and he's easily the standout here. It's also a bit sad knowing this was his last performance. He would die in a motorcycle accident this same year (1986) at the age of 39 while performing a stunt on the film Million Dollar Mystery. And then there's Martin Laundau (Ed Wood) coming and going in small bits here and there, but doing a helluva job as a slimy evil businessman. 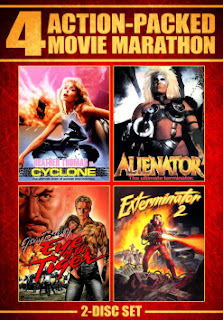 Cyclone was everything I was hoping for in a film like this. It's exactly what I needed after a series of duds and it delivered in a way that I could appreciate. It's a little dumb, but it's also very 80's and highly stylized, pleasantly cheesy and never ever gets dull or overstays it's welcome. It's just about as perfect as could be for this type of film. The fact that this was made when director Fred Olen Ray was on a high note in the mid 80's only adds to this films enormous appeal. The stunt-work, of which there is plenty, will also surprise you.

How to see it:
You can pick this one up fairly easily on VHS and Laserdisc. There's an Out Of Print DVD that goes for more than it's worth, but you're best bet is to pick up this 4 Action-Pack from Shout! Factory in a 2-disc set that's easily available for around $10 shipped. Not only do you get 3 other cult classics, but you get them all in widescreen, which is a huge plus and in regards to Cyclone, in it's best presentation to date.

Posted by robotGEEK at 3:57 PM