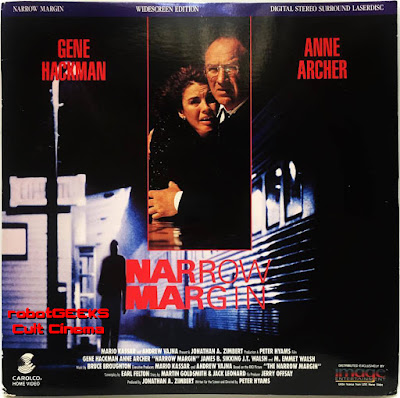 If there's one thing I really love, it's a good thriller. I've learned this past year that a solid thriller is one of my absolute favorite types of films and always puts me in a good mood. And let me tell you, I've discovered some really great gems this past year alone. Shoot to Kill, F/X and F/X 2, Year of the Dragon, Out of Bounds and Desperate Hours to name a few, and all quite excellent in this genre. But there's another reason I wanted to see this one in particular, and that is that it comes from writer/director Peter Hyams, whom I absolutely love as a filmmaker, and who's decades long history of films I'm still discovering. Hyams was on fire during the 80's and 90's, delivering some of the best films in the thriller, action, comedy and sci-fi genre's. I mean, just look at films like 2010, Running Scared, Outland, Stay Tuned, Sudden Death and Timecop! The man delivers quality like no one else can, so when I realized this was a thriller of his that I hadn't yet gotten to, I was pretty excited. I immediately snatched up a Laserdisc on eBay for cheap. Let's dig in.

A district attorney unwittingly becomes a target after he tries to pursuade a witness to a mafia execution to testify. They soon find themselves fleeing on a train with hitmen hot on their trail.

I loved Narrow Margin. I loved it to death. To be quite honest, it's a very simple premise and it's a very simple story. It's nothing we haven't already seen before, but Peter Hyams, who is one of the few in Hollywood that also works as their own Cinematographer, infuses the film with so much style, character and tension that it's a thrill-a-minute ride that never lets up the entertainment factor. And that right there is a true testament to Hyams' gift as a filmmaker. He can take a perfectly standard genre, filled with all the standard tropes, and make it a helluva fun ride simply by working his magic. 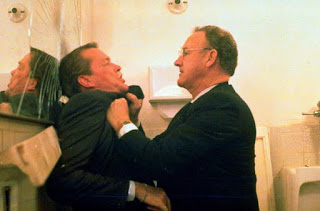 Gene Hackman is so good at being bad in films that I often forget just how great of an actor he really is. Here, he plays the straight-laced D.A. who ultimately puts his own life on the line to protect his witness, played by the lovely Ann Archer. And it's not just by running away. No sir. Robert Caulfield (Hackman) continuously thrusts himself head-on into danger, sometimes foolishly, to always get the upper hand. And it's in these moments that impressed me the most for several reasons. Hackman has never been much of an action star, but if this film is any indication, he can certainly hold his own. I suppose seeing him as a slimy villain in so many drama's, thrillers, and comic book films, I can easily forget that he can also be an intimidating badass when need be, and he certainly does that here. He was great. But that also plays into Hyams' ability to write strong character development. Even though Caulfield can be an ass, you root for him because he's on the right side of justice and will literally put his life on the line for what he believes.

Let's talk about the "look" of Narrow Margin. I will go on record and say that Peter Hyams is hands-down one of the most visually impressive directors ever. Each film he touched was infused with so much clean style, so much genuine craftsmanship and love for imagery that I still to this day have never loved a director more than I do him. Well maybe John Carpenter. But the things Hyams does with his camera setups, compositions and framing is breathtaking. And with this film in particular, his use of light and shadow is simply stunning. The fact that he does all the camerawork and setups himself just blows my mind. On the surface, there's nothing flashy about them, at least not to the average moviegoer, yet they're so impressive from a technical standpoint. It's all in his composition and framing.....and they're damn near perfect. If you ever take the time to watch this, or any of Hyam's other films, I urge you to please pay attention to his incredible camerawork. It's all him, from the idea to the execution. 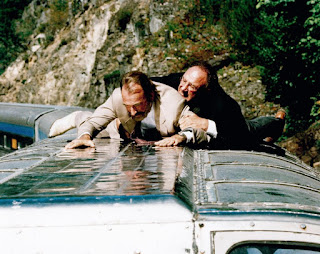 From a structure and technical standpoint, Narrow Margin is fantastic. Most of the film takes place on a train, and it's in these moments that you assume how limited the environment can be and how could they possibly make it interesting? Yet they do. There's no lazy filmmaking anywhere, even in the moments where there very easily could have been. The final act, culminating in a number of death-defying stunts on top of a speeding train, will simply blow you away. With the exception of maybe 2 scenes utilizing a green screen, 95% of them are done practically. That's really Gene Hackman walking on a moving train, fighting with a guy, and hanging on for dear life. I still don't know how they pulled some of that off. I watch it and I'm floored. They would "never" attempt that today. Never. It would be a painfully obvious and dull CGI mess. Just look at The Wolverine and Mission Impossible. But what Narrow Margin was able to pull off just literally blows my mind. If there's anything this film will be remembered for, it will surely be that. But that's just one of many great things about this little gem that will surprise you. You just need to give it a chance.

Narrow Margin doesn't break new ground, but it's not trying to either. It takes a very simple basic premise and does incredible things with it. It's a classy thriller that knows exactly what to do within it's formula and make's the most out of every single detail and frame of film. Peter Hyams, working as it's writer, director and cinematographer delivers some of the most thrilling work I've ever seen in this genre. Check it out! I can't recommend it highly enough.