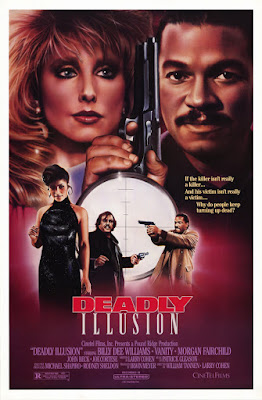 For one reason or another, it seems like I've been chasing after this movie for a long time. Not that it's hard to find or anything, because it's not. It's just that it never goes for a relatively decent price, and I'm not entirely sure why either. I can't recall how I came across it's existence in the first place, but once I discovered it was written and co-directed by the one and only Larry Cohen (Maniac Cop, Best Seller), and starring Billy Dee Williams and Vanity, and that it was a detective thriller from 1987, well shit; I was sold right then and there. I spent a number of months trying to find a copy, only to discover that it was never released on DVD, only VHS and Laserdisc, which is fine since I collect those formats on a regular basis. But they aren't cheap, at least not as cheap as I'd like them to be. Ultimately I was able to find one through a fellow collector online and I finally had my chance to see if this would live up to my expectations. Let's dig in.


Deadly Illusion, for the most part, was a solid good time. It looks and feels like a Made-for-TV movie, but with some unnecessary nudity and a whole lot of cussing thrown in. Intentional or not, it's also highly cheesy, which is part of it's charm. It seems to take the "detective for hire" premise to the fullest extent, even having Billy Dee doing a voice over narration, which is great by the way. Nearly all of the actors are going full-on hammy, and Billy Dee alone makes it worth the watch. But it suffers from a few issues. For instance, it's a tad too slow for it's own good. While it's enjoyable enough watching an over-reaching detective-for-hire following leads and bedding women, it's not nearly as interesting as Cohen wants you to think it is. There was a moment early on in the film, a sequence where Hamburger (Williams), yes that's his name, crashes an upscale party, where he gets into a fight with the guy who hired him for a botched murder-for-hire gig previously. Did I mention that he's not above taking money as a hired killer? But anyway. The way this sequence is shot, choreographed and executed is brilliantly 80's and soooo cheesy and it was great. This sequence was amazing and it showed so much promise for the rest of the film. But sadly, that sequence was the highlight for me, and the rest could never quite match that excellent combination of technical wizardry, cheesiness, violence and Billy Dee Williams.

Another issue I had was that Vanity was severely underused here. Playing the girlfriend to Hamburger, and sometime employee, she kind of just shows up here and there looking hot, sometimes even just as the girl on the other end of the telephone call, and it's such a shame really. She has a magnetism whenever she's on screen. Everyone around her sees and feel's it, and it wouldn't be until the following year in Action Jackson (1988) that she would get one of her biggest roles. But let's not forget she played Laura Charles in The Last Dragon (1985) and was dynamite! 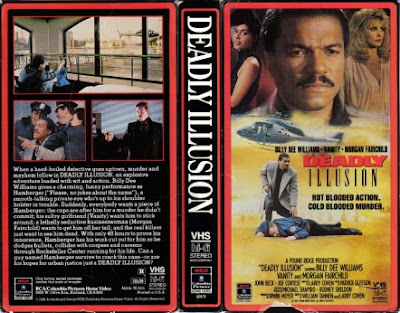 1987 was a really busy year for prolific screenwriter, and sometime director, Larry Cohen. In this year alone, he directed a total of 3 films (It's Alive III: Island of the Alive, A Return to Salem's Lot, and Deadly Illusion), while having also written 4 films, these 3 and Best Seller. And the genre's and tone for each of these are all over the place, as well as the quality. Of all of these films, Best Seller is the best, with Deadly Illusion coming in a close second. Is it great? No, not by a long shot. But it's good enough with a high enough entertainment value to keep you invested. Most notably, Billy Dee Williams playing an ultra cool and smooth ladies man detective-for-hire who goes by the name Hamburger. His girlfriend is also Vanity, only he's so smooth with the ladies that he can't even stay faithful to her......Vanity! Because he's obviously crazy. Here he gets suckered into a deadly scheme involving models, drugs and backstabbing, more often than not putting his own life, as well as his girlfriends, in danger, while still always able to have time to flirt with the ladies. I tell you, this guy is smooth. For someone who's obviously older than most of the actors in here, not to mention Vanity, who's clearly in her 20's, he doesn't get deterred one bit. The film does overtime in constantly trying to remind you that this guy, older and a bit pudgy in the midsection, is one smooth son of a bitch with the younger ladies.

Ultimately, I enjoyed it. But I was really hoping to love it. The positives are that it's at times a bit unintentionally goofy, while still looking like a hard-edged detective thriller. Vanity is an exquisite array of sunshine in a drastically underused role, and Billy Dee is marvelous as the cocky-smooth private eye who never loses that wink in the eye or that devilish smile, and co-directors Larry Cohen and William Tannen (Hero and the Terror) do a fine job giving the film a gritty style, consistently noir-ish. The negatives are that it's never quite as awesome as you hope it will be. It certainly has the potential, and a good chunk of it is solid, but never quite packs the punch it very well could. It always feels like it's missing a beat or two, never quite hitting the mark fully. I think had there been a little bit more action, or violence, or even some of it's unintentionally goofiness, it could have been something special. I will say though, it's definitely one of Cohen's better films.
Posted by robotGEEK at 12:15 PM