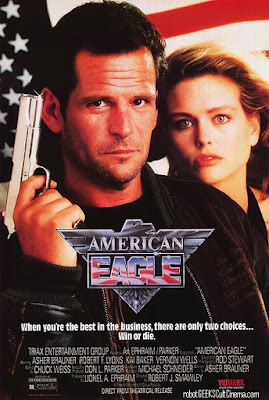 Max Shane (Asher Brauner) is a Vietnam vet who currently works as a soldier of fortune, much to the dismay of his wife Angela. When she decides to go visit her brother, and Max's former Vietnam brother-in-arms, in Cambodia for a break, she is kidnapped by a prostitution ring run by one of their former Vietnam brother-in-arms Johnny Burke (Vernon Wells), who has fallen off the deep end into a kidnapping pimp and psychopath. Max and Angela's brother soon set out on a rescue mission to Cambodia to save Angela.

I have to be honest, I loved this. It was a blast from start to finish and I loved every minute of it. Not because it's a great film, but because it was so damn entertaining for all the wrong reasons; first and foremost because of the fact that this is essentially just a Commando ripoff. It seriously is. Only Max is heading to Cambodia to rescue his wife, not his daughter. Hell, Vernon Wells literally just reprises his role of Bennett from Commando, playing him to a "T". He just looks different, this time sporting a blonde mullet and skeezy beard and going by the name of Burke. But he's literally playing the same exact role. If you closed your eyes, you'd swear you were listening to Commando. Burke (Wells), acting as the main muscle man (again), even works under the big boss, a local kingpin, just as Bennett did in Commando. And the similarities to Commando don't end there either. There's even a knife-fight between Max and Burke similar to the one in the end of Commando between Matrix and Bennett. And there's a moment where Max is running past a row of windows during the end battle as they are being shot at in succession, just the way Matrix did in Commando.

Now that we have all the Commando references out of the way, let's talk about the movie. It's one of those perfect examples where it's painfully obvious the main actor also wrote the script, which he did. He tries so hard to make himself seem cool, tough and macho, oftentimes to the point of absurdity. For example, when Max discovers his wife has been kidnapped, you'd never know it. He never shows a thread of emotion at any given moment. You'd think he actually didn't care. No sir, all that falls on her brother Rudy (Robert F. Lyons) who has to provide enough dramatic acting and range for the both of them. It's actually a bit much a lot of the time, but hey, someone has to pick up Max's emotional slack. And honestly, all the macho stuff is really undeserving. Asher Brauner just isn't that cool, or good of an actor. In fact, he just comes across as being terrible, which at the same times makes it highly amusing and even sometimes hilarious. He looks like a cross between Nick Nolte and James Remar, while trying to impersonate Michael Pare, right down to his voice. And with the film's surprisingly obnoxiously loud over-dubbing, it's like constantly getting punched in the face with Brauner's terrible line delivery.

I really enjoyed this one quite a bit. I mean, how can you not? This is the kind of shit I live for when it comes to low-budget action movies. Though meant to be a serious rescue mission film, it's so cheesy, corny and insanely cliche that you just kind of watch in bewilderment at it all. But I love that about this. Everyone is taking this seriously, and that's what makes it so special. It's so hard for us (the viewer) to take it seriously though when Asher Brauner is so over-the-top macho/cool that he ends up being more of a caricature than anything else. I mean, who talks like that? Who acts like that? Even worse, who dresses like that? I know it sounds like I'm giving the guy a hard time but trust me, I love him. I love that he is that way in this and it's because of him that American Eagle soars as high as it does. Yes, I just went there.

What surprised me the most was how competent this ended up being under the direction of Robert J. Smawley, an assistant director on a few films like The Buddy Holly Story and Lethal Weapon 3. Seriously, for a film this small, he does a great job making it look bigger and better. And most importantly, he handles the action exceedingly well, which is surprising since he's only ever directed 3 films. How he came to get this gig, I'll never know, but it's a far better film because of him.

You really can't go wrong with this one if you're looking for a good time in the Low-Budget 80's Action department. It's cheesy, full of action, nearly plays on the original Commando storyline beat for beat, and it's a blast watching Vernon Wells play a different character, but at the same time also playing the same character of Bennett. It's weird. Oh, and Asher Brauner is a hoot. Honestly, he's a fascinating character. His unusual "acting" style, his line delivery, his machismo script; it's all drenched in over-the-top 80's excess and it's glorious. I will say that the first half is a bit slow and sometimes confusing. He's trying to be clever by only hinting at things for a while before it all comes together in the second half. But it's fine, because we get to see unnecessary steamy showers with his wife and a trip to the zoo with his family, because deep down inside he's really a family man. Only we don't ever see his son again after that, which is bizarre. Though there's little action in the first half, the seriously corny melodrama is entertaining enough and holds you through until the second half kicks in, where all hell breaks loose, and it's a blast.

Brauner was a television actor for 3 decades before trying to make it as an action star. Seeing as it wasn't going to happen any other way, he decided to write them for himself, and he would end up starring in 2 self-written action films in 1989 alone, this one and Merchants of War. Sadly he never broke out as an action star, only appearing in a few more films in supporting roles before calling it quits, but if American Eagle is any indication, he just needed the right material to deliver some solid cheesy goodness. One thing's for certain though, I need to track down Merchants of War immediately.
Posted by robotGEEK at 10:52 AM