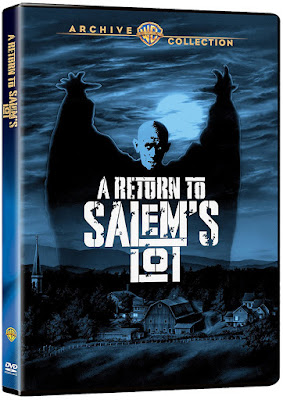 Continuing my Larry Cohen kick, and having just finished Deadly Illusion (also from the same year), I decided to tackle another one of his projects; one I'd been itching to check out for a long time. Larry Cohen is such a fascinating filmmaker to me. His quality is all over the place, varying from great to trash, but mostly trailing that fine line between both. When he's on fire, the guy can deliver some solid genre classics. Just look at Best Seller, which he wrote this same year as this, or Maniac Cop, which was released the following year. Or hell, even The Stuff, which he wrote and directed back in '85. But in the same breath he can deliver some truly bizarre films, like this one for example. A film that feels so unnecessary and so trite that I really struggled with trying to finish it. But I did, reluctantly. Let's dig in.

I should start by saying I was genuinely excited going into this one, because despite some of his bad films, I really tend to love a lot of his stuff, like Best Seller for example, and his Maniac Cop films. But Return To Salem's Lot has a bad reputation. Most people don't dig it, especially when you compare it to Tobe Hooper's original. But even had this been bad, I was hopeful that I would still enjoy it as a possible hot mess, the same way I enjoyed Sleepwalkers; an enjoyable campy over-the-top disaster. That was my hope.

Larry Cohen's Return to Salem's Lot, not necessarily a film anyone really wanted, but as an idea has so much potential, is a mess. I'm not even sure what his intent was, but I really struggled to get through this schlocky mess. Hey, I'm all for schlock, which is part of the reason why I love some of Jim Wynorski's earlier films, but then there's boring schlock, which should just be criminal, and that's what this is. Larry Cohen is a decent director, but he doesn't carry a strong enough visual flair to really make this film look good in any context. You can't help but feel that this looks and feels like a Made-for-TV movie (which the first one was). The only problem is that this wasn't a Made-for-TV movie. Sure, Tobe Hooper's original was, but he did such a phenomenal job on it that you'd never know it just by watching it. His visual aesthetic was able to transcend that very specific Made-for-TV tone. The same cannot be said about Larry Cohen and his sequel.

Cohen's very specific way of directing, oftentimes serviceable but never stylish, really throws a wrench (so to speak) in this one's overall impact. It's a bit polarizing really. So many of his decisions come across as surprisingly amateur, despite the fact that the man has been directing films since 1972, yet you look at this film and wonder how that could possibly be? Devoid of any life, character or even stimulation, the look of Return to Salem's Lot couldn't be anymore dull if it tried. Not that that would be a precursor to the quality of the final product overall, but it's not a good start either. And honestly, seeing as this was a straight-up film and "not" a mini-series like the original one was, it should have been better. Much better. Cohen wasn't restricted by television limitations, but just simply judging by this films production value, you'd think that his hands were somehow tied.

Michael Moriarty was absolutely awful here. He's not the most versatile or talented actor on the planet, but he's always been enjoyable enough in anything I'd see him in, who, by the way, is a frequent Larry Cohen collaborator. Here he has to play an asshole absentee father/documentary filmmaker who recently reconnected with his adolescent son while heading to Salem to claim a house that was left to him in a will. His approach to this material is so head-scratchingly bizarre. Monotone, with zero life or energy, his delivery can only be described as half-assed, or peculiar. He comes across as just not being able to act, which we all know he very well in fact can. Maybe it was in Cohen's instructions, or maybe Moriarty just wasn't feeling the material, but holy hell he couldn't have been worse even if he tried. Even when he's angry, shouting and fighting, you're not going to get any range out of him in these moments, which blows your mind. He can still be lifeless in all these different scenarios.

I think one of this films most prominent issues is it's completely bizarre shifts in tone. You never know what to make of it, and when you throw in the completely random vampire-hunting character of Dr. Van Meer halfway through, played by legendary writer/actor/director Samuel Fuller, who totally seems lost, you just scratch your head, because really, that's all you can do. The terrible editing only makes it worse. A few really good shots and sequences are marred by gawd-awful editing that totally ruin a decent scene. As a side-note, I also take issue with the cover art, which shows the vampire from the first film, yet the vampires in this film look nothing like that.

Early in his career Larry Cohen stuck to television in the 60's, before making his way to Blaxploitation in the 70's, where he wrote Black Caesar and Hell Up In Harlem. It was also in the 70's that he dipped his toes into genre films by writing, directing and starting one his first franchises with It's Alive!. He would continue writing, and sometimes directing, films and tv shows and movies in nearly every genre into the mid-90's, but it's really the 80's where he really found his most success and productivity. That decade is littered with some of his best and worst work. Say what you will about the quality, but you can't say he wasn't prolific and passionate about films. And I think that's one of the things I like about him. I like that he took on nearly every genre, even writing an episode of NYPD Blue as well as low-fare genre classics like Wicked Stepmother and Q: The Winged Serpent. He would even be credited as writer for films that found their way to the big screen with Guilty as Sin with Don Johnson, Phone Booth with Colin Farrell and Cellular with Kim Basinger. The guy wasn't pigeon-holed into any specific area, and nothing was beneath him if wanted to write it. But when he fired on all cylinders, he could deliver one helluva great film. Best Seller and Maniac Cop 2 would be my top picks.

As far as releases go, this one was a hard one to get for many years. Having gotten a VHS and Laserdisc release in the late 80's, it was a film that never got an official DVD release until 2010 via Warner Archives On-Demand label, finally in proper widescreen and finally in a much better transfer. And I have to admit, the transfer was great, even for a DVD that's 7 years old now. Though the release is devoid of any special features, the low price point makes it easily and readily available to you if you really need to see it badly. But do you? That's purely your call. Don't say I didn't warn you though. It may be worth it for the sheer fact of how bizarre and amateur it all is, which may be reason enough.
Posted by robotGEEK at 1:08 PM