Time seems to be the one thing that gets away from me more than anything. As I work on a handful of reviews on films I've just seen this past week alone, as well as digging into some Blu Ray reviews for Arrow Films, I thought I'd post something from the collection to buy me a little time. 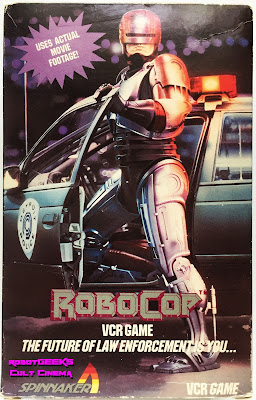 Man does this bring back a lot of memories. I remember seeing this at a Service Merchandise store back in the late 80's after Robocop had just hit theaters, and begging my mom to get this for me, for no other reason other than it was just something related to Robocop, which I was absolutely obsessed with at the time. Hell, who am I kidding? I still am! I must have been about 12 or 13 and just remember being a brat about it, begging and begging her to buy it for me. And I remember her response clearly. She said "You're not going to like it. You think you will, but trust me, you won't. It won't be the fun game you think it will be". Would I listen? Absolutely not.

Guess what? She was right. I remember being dreadfully bored to death with it. I tried, several times in fact, either solo or with my brother, but it was just dull as shit. I suppose I was the wrong age group for this kind of game to be fair. Looking at it now, it's definitely an adult game, and my immature impatient brain just couldn't handle it. What I do remember is that it came with a VHS tape, and you would play a scene until it told you to pause, at which point you would utilize the board game. Then you would play another section of the tape and so on. 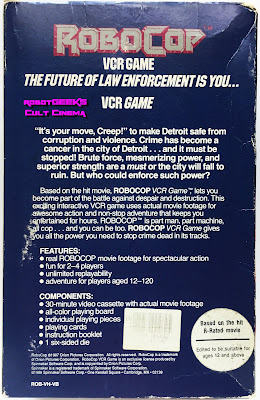 Needless to say, I gave it a shot less than a handful of times before it ultimately sat on my shelf for years. I don't know what happened to it, but I'm certain my parents sold it in a garage sale at some point. It wasn't until decades later that a random memory of Service Merchandise popped into my head that I remembered this. Of all the things, and all the items I bought at that store, this was the first memory that sprang up and a flood of 80's childhood memories came rolling in. Nostalgia goodness would be more accurate. So I started trying to track it down and discovered that it typically goes for more than I was willing to spend since realistically, it's just going to sit on my shelf. I just wanted to look at it, not necessarily play it again. But who knows? Maybe I would.

I kept an eye on it for a long time, randomly doing searches until I found one at a decent price that I was comfortable with. That day finally came when a seller had listed one for $20 with free shipping. It was an "auction" style listing, so I didn't have the option of "buy it now". I put in my bid and hoped for the best, and as luck would have it, I won. Not a single person bid against me, and I think I know why. The seller listed it using a lot of different photos, but the one he used for the primary image in the listing, the one that pops up when you're browsing, was of the boardgame, and unless you payed really close attention, you would not have know that it was the Robocop VCR Game. Sure it's in the title, but the listing picture is really what people will pay attention to the most. Or maybe I just got lucky and not a single person in the United States was actively looking for one of these during those few days, which could also be the case. I'm just happy that I got one again, and I do love looking at it on my shelf.
Posted by robotGEEK at 1:30 PM