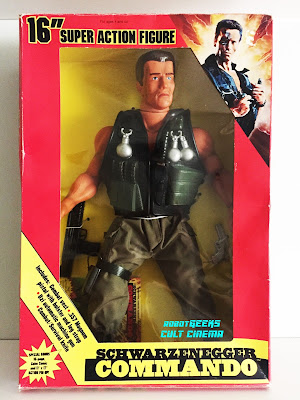 Diamond Toymakers was a company founded in 1969 by Sid Diamond, who started the business by selling yo-yo's, then transitioning into stickers in the 80's, securing rights to hot properties such as Pac-Man, E.T. and Donkey Kong among others. They eventually created the famous "scratch and sniff" stickers that are still collectors items today. I don't know a whole lot about them, but at some point in either the early or mid 80's, they dipped into the action figure market, most notably securing rights to the Arnold Schwarzenegger hit Commando.

I don't recall ever seeing these big bad boys in the toy store when I was a kid, but the one I do remember wasn't an action figure, but rather their Mega-Ultra-Super-Duper-Rare Commando Combat Vest Set, which included the vest, a grenade, knife and I.D. I remember seeing it at a toy store in my local mall back in '85 or '86 and begging my mom to get it for me. I wanted to be John Matrix for Halloween that year. Alas, my pleas were in vain. She didn't get it for me, but I've been on the hunt for that Combat Vest Set ever since so if anyone out there can help me out, please feel to contact me. It's my Holy Grail of 80's toys and the one thing I will never give up on trying to get. But moving on.

This 16" bad boy is just awesome. I recently acquired one complete in box just this past year. But to be honest, I'd never even knew of it's existence until maybe a few years ago, at which point I began trolling eBay nearly on a daily basis for years. You see, they're not cheap, often going for well over $100 typically, and sometimes for several hundred. As much as I wanted it, that was more than I was comfortable with. So I waited.....patiently. If there's something I've learned in the world of collecting, patience is a virtue. I know if I wait long enough, I will in fact find one at a decent price, and that day finally came. Someone had listed this on eBay for $40 in an auction-style listing. I put in my bid and hoped for the best. I couldn't believe it. I won. I won the fucking thing with my single $40 bid. Not a single person on this planet must have been needing one of these during the 6 days it was listed. Needless to say, I was very happy. Considering it's age, and the fact that the box is already flimsy to begin with and probably has been moved around quite a bit in it's 32 years, it's in remarkably good shape. 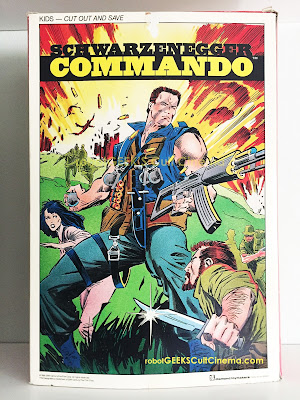 This guy currently sits on a display shelf in my bedroom. I would love to find a box protector for him some day though. Maybe not one of the big hard acrylic ones as they tend to take away so much of the visual impact of the toy, but maybe one of the lighter ones, like the ones they sell for vintage NES game systems. I've been looking, but so far can't seem to find one big enough.

My obsessive toy collecting has pretty much stopped recently since I've gotten most of the toys I'd been after. But there are still a handful that I still need to get, most importantly the Commando Combat Vest Set (1985) from Diamond Toymakers. If you know of one, please let me know. I'm more of a casual toy hunter these days, only browsing for long-lost childhood toys from time to time. But I'll always be a kid at heart, and the hunt is always on.

Check out this great article I found about the Diamond Toymakers Commando line of produced and unproduced toys via The Arnold Fans website by clicking HERE.