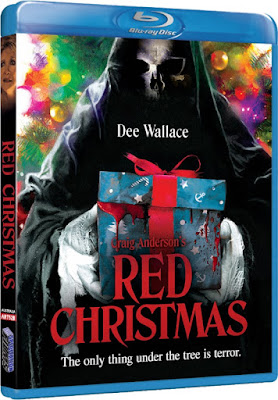 I had actually never heard of Red Christmas until just a few weeks ago. And it's a pitty really, because it's actually a pretty good slasher. While I'm not entirely sure if the intent was to be somewhat of a throwback to 80's slasher's, there are certainly elements that lead me to believe that, while also being something very recognizably modern. Let's dig in.

When Diane (Dee Wallace) is having a Christmas get-together for her large family in her remote home in Australia, an unwelcome stranger from her past arrives. Soon this mystery guest is killing them off one by one in bloody fashion and Diane needs to figure out who this person is and how she can protect her family.

Red Christmas was a very pleasant surprise. Actor/Writer/Producer/Director Craig Anderson, here directing his first horror film, has fashioned an old-school style slasher that delivers the goods on all fronts. It's a blood-soaked punch to the face of bright neon colors and slick camerawork, with a script that sticks to the standard tropes associated with these types of films, while also adding a few new elements to the table to my surprise, and I really ended up enjoying this one quite a bit. I had to simmer on it for a day or two though before I could write anything about it because it packed quite a visceral punch once it was over. The new thread Anderson incorporated into the standard slasher might ultimately hit a nerve with a few of you, but it will certainly get you talking, and might make a few uneasy, but that's always a good thing. 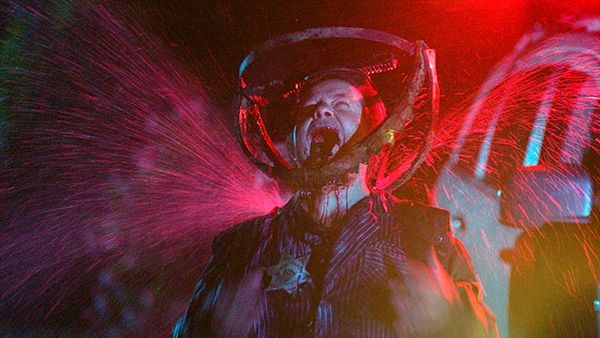 One thing you'll notice right off the bat is that this film looks better than it should. Anderson has acquired such a talented team behind the camera that despite it's limited budget restraints, this could easily pass for a film playing at your local cinema. In fact, I have to admit that it was even better than some of the PG-Rated garbage that big studio's are releasing theatrically these days. While I didn't think that his particular style was in tune with classic 80's slasher films (I'm not even sure he was trying to though), it was slick enough to almost pass for it. As far as his script goes, it's a pretty straight-forward film involving a stranger who shows up unannounced during a family gathering over the holiday's and proceeds to pick them off one by one once the sun goes down. Yet he adds a number of certain ingredients (one of them being the killer himself) that easily makes it stand out among the crowd. I won't mention them here for you, but I found them both brave and intriguing, greatly benefiting the final product overall. Of course, there are all the standard tropes that come along with this type of sub-genre slasher, even the annoying ones, but if you listen to his commentary, you'll understand why he felt it important to include some of them, knowing that they can drive people crazy. 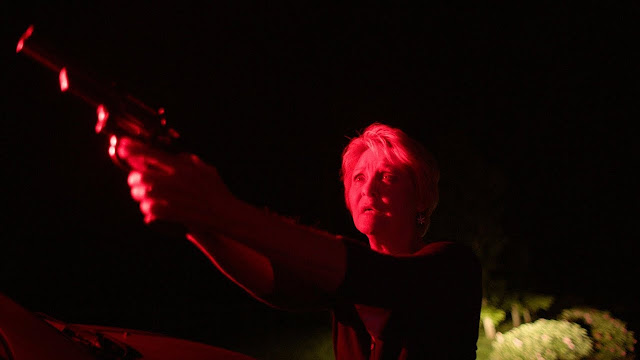 The real standout in the film though will undoubtedly be Dee Wallace' performance. Holy crap. That woman, a legend in her own right, delivers one helluva tour de force performance as the matriarch of this highly dysfunctional family, the glue that holds them together (as she tries), and ultimately their protector. Man, if there was ever an actress worthy of the title Scream Queen, it's Wallace. While I have continued to see her regularly throughout the years in various projects, most notably Rob Zombie's Lords of Salem, I can't remember the last time I saw her in such a physically demanding role and performance other than Cujo back in 1983. And though decades have literally gone by since then, you'd never know it by her physicality. She hasn't lost her step, spunk or vigor and easily carries the film entirely on her own. The rest of the cast is also quite excellent, with not a single dud to be found, but it's really Dee Wallace you'll take away from this experience.

The practical effects work is commendable and more often than not impressive. And that was another area I really enjoyed in keeping with it's throwback vibe. I loved that they stuck to effects work practically rather than with CGI, where it would have been cheaper and easier to do so, and I have to admit, there was a kill or two that really impressed me. Helen Grimley's score is good and does the job well in ramping up the tension when it needed it, but her standout work has to be in the opening title track, which oozes 80's synth cool. In fact, it's this fantastic opening number that kind of gets the ball rolling in making you think that the film is going to be an 80's style slasher, and it is to a degree, and then it isn't. I really wish Grimley had continued that style of score throughout the film though. It really gave the film an extra kick of awesome, only to turn more conventional and serviceable for the remainder of the film. Still good, but not as good as that opening number. 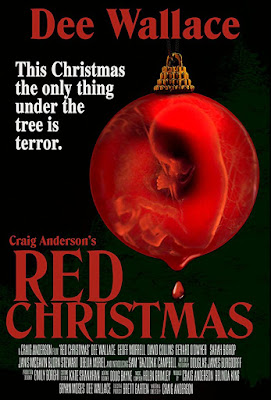 If you love horror, and more importantly slasher's, this is a Must-Buy. Great care and attention to detail has been to the visual aspect of this, so to be quite frank, Blu Ray is the only way to go. It's candy-colored bright neon drenched 1080p presentation is stunningly clear. I also highly recommend watching "Dee Wallace Speaks!", where Craig Anderson interviews her for 20 minutes and she discusses her long lasting career and lots of insight into some of her more iconic roles in Cujo, Blake Edwards "10", and The Frighteners. She's such an engaging personality and so much fun to listen to when she revisits some of her past films rather matter-of-factly.

Red Christmas doesn't reinvent the genre, but it does add a few new twists to keep it interesting. Strong visuals, character development and effects work make the film better all around and worth checking out. Dee Wallace steals the show, and the masked killer, complete with his motivations, drives the narrative in a surprisingly fresh way. Red Christmas was released by Artsploitation Films on October 17 and is currently available to purchase on DVD and Blu Ray from any number of major online retailers and also available to stream/rent on Amazon.
Posted by robotGEEK at 9:16 AM