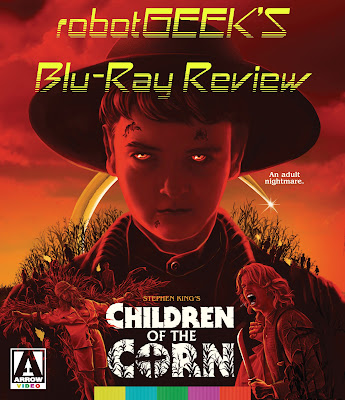 Children of the Corn was one of my very first introductions to the world of Stephen King. It was a film that I fondly remember playing over and over again on cable back in the mid to late 80's, and it was a film that I saw so frequently that I now know the entire film by heart, line for line. In fact, my brother, sister and myself would hilariously recite many of the more memorable and catchy lines of dialogue throughout our life. It helps that I was roughly about 8 when this came out, so basically the prime age to absorb horror on a visceral level once this hit home video and cable a year or two later.

There's a reason why Children of the Corn has remained one of the more memorable Stephen King adaptations all these years later. Because it's actually pretty good. While not one of the best, it's certainly earned it's status as one of the better film adaptations when you consider the vast majority of them are shit. It's a modest film from a budget standpoint, but that doesn't keep it from being an engaging and oftentimes terrifying thriller/horror film. I mean, the idea of a town full of kids killing every single adult is indeed terrifying, but it's the film's overall structure - from it's tight script, direction, dark, brooding tone, incredible casting and most of all, Jonathan Elias' now iconic score (easily one of the most identifiable scores in the history of cinema whether you like the film or not), all create a strongly structured film that kickstarted a franchise and continues to this day to be one of the most iconic horror films in the last 3 decades. And that theme song. Oh that theme song will stay stuck in your head for days and days after.

One of Arrow Video's most recent releases is this exceptionally packaged 2K restoration that comes packed to the gills with extra content that will take you days to sift through. If you are a fan of this film or of Arrow Video's releases in general, then this Blu-Ray upgrade should be a no-brainer. But if you were still debating whether the film's 1080p upgrade or it's Special Features content are with the investment, I decided to dig into all of that for you, to help you better make that decision. So let's dig in.


"And A Child Shall Lead Them" 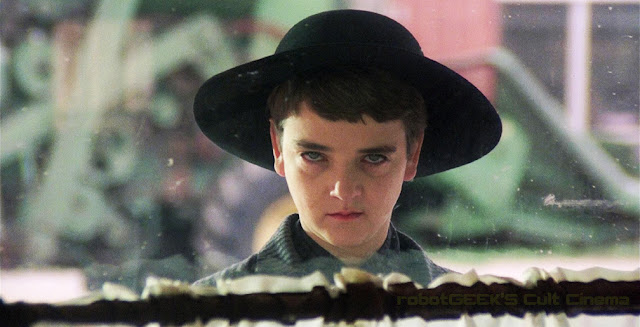 That is a lot of extra content if you ask me, and well worth the price of this Blu-Ray alone. You'll spend more time digging through all those extra's than you will watching the film, which is always a plus and personally one of the main reasons why I ever buy Blu-Rays to begin with; the extra content. And Arrow Video's release does not disappoint. Let's start with the film itself. Arrow Video's new 2K restoration from the original camera negative is simply gorgeous. The film has never looked more vibrant than it does here. Whereas most previous releases never did much to restore the original film's lush color scheme, here it's on full display in glorious HD. And that was always a problem with every previous release of CotC. It was always so gloomy with a faint gray haze/filter, with much of it's original luster gone. But here the colors pop, and you see for the first time how the film is awash in saturated greens, reds, yellows, and even down to Malachai's orange hair, to an eerie effect. There is a slight graininess present throughout, but that's entirely expected considering it was shot on film in 1983/1984. The slight grain only adds to the film's visual presentation in a positive way. It "looks" like film, rather than digital, and by restoring it from it's original camera negative, CotC looks stunningly clear and impressive - the best possible version you're ever going to get.

Of all the many interviews located on this release, the most enjoyable by far is "Harvesting Horror", an immersive retrospective clocking in at a fun 35 minutes. Director Fritz Kiersh is front and center as he explains in detail the entire history and process of making his first big screen feature film for New World Pictures, offering bits of fascinating information that really surprised me, such as the film being on such a tight budget that it's technically a low-budget film. And it's because of the tight budget, they were forced to get creative in a number of different area's to make the most of what they had. You'll finally understand, in detail, why the ending was never all that impressive or exciting, mainly in it's use of mediocre special effects. One of the funniest bits of behind-the-scenes info is in regards to the crew misjudging the ever-changing seasons, and not taking into account that the corn stocks, a huge element to the entire film, begin to turn brown, forcing the crew to spray paint most of them green. You also learn through all the various interviews (all separate elements) from the stars and production that Sam Raimi was considered to direct at one point, and that a positive or negative quote from King himself on the cover of your film, at the time, could make or break it. There was so much fascinating stuff to absorb and I won't spoil it all for you here, but rest assured, it's a helluva fun time to dig through.

Linda Hamilton had not yet starred in The Terminator (that would be later the same year), so she was relatively new to films having stuck to television work up until this point, but her solo interview "It Was The Eighties!", offers insight into the casting of her very first starring role, and her experience working on a relatively low-budget film that would go on to endure for decades in this enjoyable 13 minute interview.

The plethora of other interviews were also excellent and if you love behind-the-scenes stories, these are a must watch. For example, I had no idea that this was composer Jonathan Elias' first film, and arguably his most recognized. But it's information like this that keeps so much of these extra's engaging and worth digging into, most notably whenever director Fritz Kiersch was discussing anything related to the film. He just has this very endearing way of getting so much information and the history of it's production across in a very easy matter-of-fact manner. I always liked his work on this. I always felt he did such a good job by trying to go Hitchcock with a lot of the suspenseful elements, by utilizing creative camerawork and techniques a la Psycho and even Jaws. Kiersch would go on to direct a few more films following the success of this with cult classics such as Tuff Turf, Gor, Winner Takes All and the ultra hard to find The Stranger.

Arrow Video has done it again with yet another outstanding release. The upgrade is superior in every way to any other version out there, and the insane amount of extra content make this a must-buy for your collection. Release on October 3rd, you can purchase this on any number of online retailers (we all tend to stick to our favorites), or you can purchase it directly from Arrow Video HERE.

Until next time, robotGEEK out...

If you have a new film or Blu Ray release you would like me to review, please feel free to contact me at jasonisageek@yahoo.com for all media inquiries.
Posted by robotGEEK at 1:06 PM